THE LONDON Metropolitan Police have come in for criticism after alarming footage surfaced appearing to show officers “manhandling” women during a vigil held in memory of Sarah Everard.

It came a day after police confirmed the remains of Ms Everard had been found in an area of woodland in Ashford, Kent, a week after she went missing while walking home from visiting a friend in Clapham.

A serving police officer, Wayne Couzens, has been charged with the kidnap and murder of the 33-year-old marketing executive.

The killing has sparked a furious backlash across the UK and spakred renewed debate around the public safety of women, with many women taking to social media to share their own unsolicited experiences with men.

It also led to the formation of the Reclaim The Streets movement, with those involved in the collective eager to speak up on the subject of sexual violence and intimidation against women by men.

The group had planned to hold a peaceful vigil on Clapham Common in honour of Everard, on Saturday evening but ultimately cancelled those plans after failing to engage the London Met Police in talks about how best to hold the event.

Instead, they instructed anyone wishing to pay their respects to light a candle on their doorstep.

However, despite the change of plans, hundreds still descended on Clapham Common in a show of solidarity, including the Duchess of Cambridge, Kate Middleton. 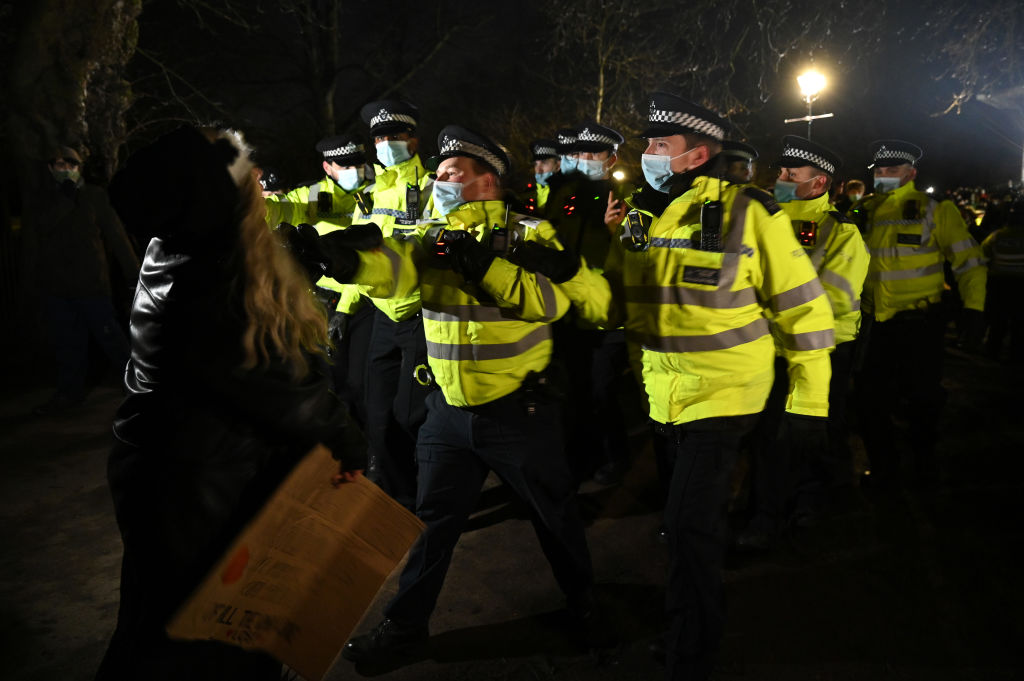 While the vigil was largely peaceful, things boiled over later in the day when police surrounded a bandstand laden with flowers and tributes to Everard.

Several officers were filmed grabbing women and leading several away in handcuffs while chants of “shame on you” and “arrest your own” could be heard.

Tensions are high because #Sarah was allegedly murdered by a metropolitan police officer so you would think they would handle this vigil with some sensitivity. #notallmenbutallwomen pic.twitter.com/ezi3YcHcao

One woman summed up the mood of many in the footage shared online telling the officers at the scene: “You’re supposed to protect us.”

The London Metropolitan Police’s handling of the situation has sparked fury with UK Home Secretary Priti Patel among those to express concern.

“Some of the footage circulating online from the vigil in Clapham is upsetting,” Patel tweeted.

“I have asked the Metropolitan Police for a full report on what happened. My thoughts remain with Sarah’s friends and family at this terrible time.”

Scuffles break out at Clapham Common memorial for Sarah Everard as people chant “arrest your own.” pic.twitter.com/6AXFK5sl7a

The Mayor of London, Sadiq Khan, also described the scenes as “unacceptable”, tweeting: “The police have a responsibility to enforce Covid laws but from images I’ve seen it’s clear the response was at times neither appropriate nor proportionate.”

However, Assistant Commissioner Helen Ball has defended the police response, claiming they were put in a position “where enforcement action was necessary”.

She said: “Hundreds of people were packed tightly together, posing a very real risk of easily transmitting Covid-19.

“Police must act for people’s safety, this is the only responsible thing to do. The pandemic is not over and gatherings of people from right across London and beyond, are still not safe.

“Those who gathered were spoken to by officers on a number of occasions and over an extended period of time. We repeatedly encouraged those who were there to comply with the law and leave. Regrettably, a small minority of people began chanting at officers, pushing and throwing items.”