DONALD TRUMP has hit out at Twitter after several of his tweets were flagged with a fact-check warning for the first time.

The US president has accused the social media platform of "interfering in the 2020 presidential election" and "completely stifling FREE SPEECH" after warnings were added to two tweets.

In the two Tweets, Mr. Trump spoke out against the use of mail-in ballots in the upcoming US election, claiming they were "fraudulent" and warning"mail boxes will be robbed".

However, under the posts, a link was added reading: "Get the facts about mail-in ballots".

A “what you need to know” box also features on the page, highlighting three different claims about postal voting previously made by the president and the reasons why they are incorrect. 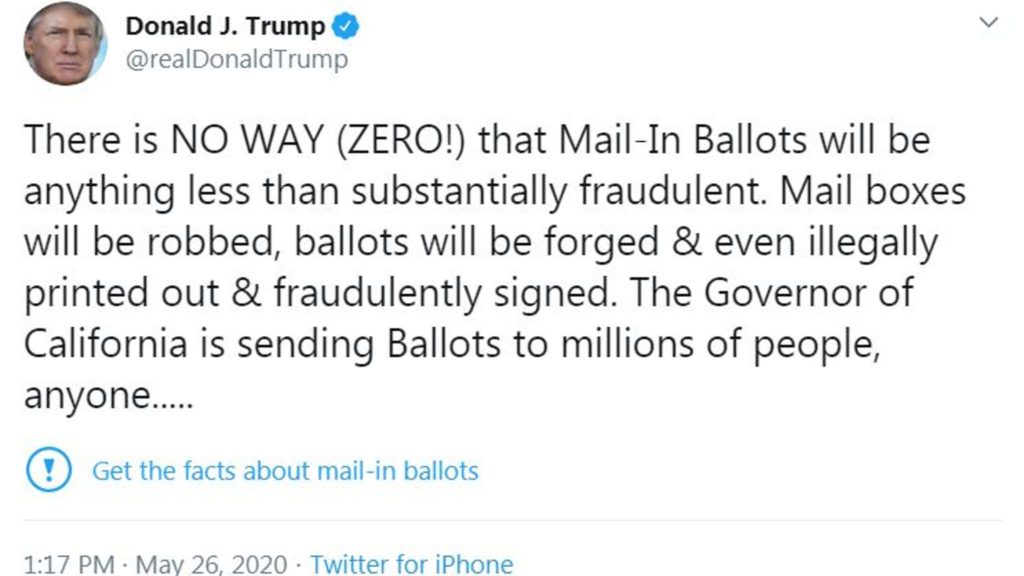 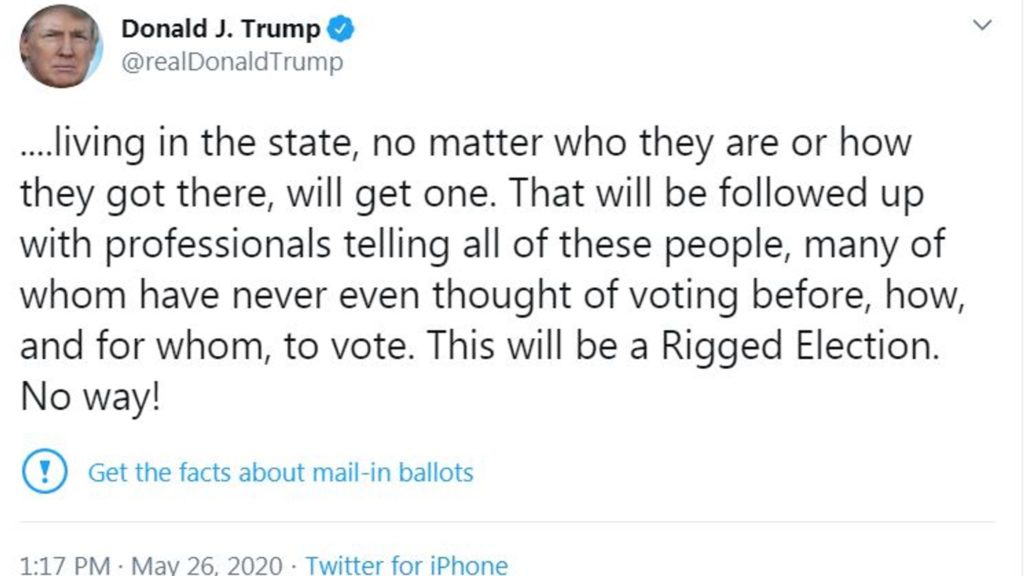 Reacting to the addition of the two fact-heck warnings, Mr. Trump tweeted: "Twitter is now interfering in the 2020 Presidential Election.

"They are saying my statement on mail-in ballots, which will lead to massive corruption and fraud, is incorrect, based on fact-checking by Fake News CNN and the Amazon Washington Post.

"Twitter is completely stifling FREE SPEECH, and I, as president, will not allow it to happen!"

It represents the first time Twitter has sought to apply its community guidelines to the President and follows Mr. Trump’s repeated claims on the platform that former Republican representative Joe Scarborough killed an aide in his office 20 years ago.

The President has repeatedly tried to implicate the MSNBC Morning Joe show host in the death of Lori Kay Klausutis, 28, whose body found in Mr. Scarborough's Florida office on 20 July, 2001, while he was in Washington DC.

Earlier this month, Mr Trump tweeted: "When will they open a Cold Case on the Psycho Joe Scarborough matter in Florida.

"Did he get away with murder? Some people think so. Why did he leave Congress so quietly and quickly? Isn't it obvious? What's happening now? A total nut job!"

Mrs. Klausutis’ husband, Timothy J Klausutis, has been among the most vocal critics of these unsubstantiated claims.

In a letter to Twitter CEO Jack Dorsey he demanded that Mr Trump’s tweets be deleted, branding them “bile and misinformation.”

In the letter, Mr. Klausutis explained that his wife had an undiagnosed heart condition, which led to her falling and hitting her head on her desk at work.

This cause of death was confirmed by medical officials at the time.