DONALD TRUMP has savaged the US women's soccer team after they failed to win Gold at Tokyo 2020.

They were knocked out by eventual winners Canada in Monday's semi-final, before eventually securing a Bronze medal by beating Australia on Thursday.

Trump labelled the team "leftist maniacs" and insisted they might have won the competition if they weren't so "woke".

"Woke means you lose," the former president said in an official statement. "Everything that is woke goes bad."

Spearheaded by Megan Rapinoe, the 36-year-old forward who has spoken out about equal pay and racial inequality in the women's game, the United States went into Tokyo expecting Gold.

Football has featured in the last seven Olympic Games, and the US has won the event five times, but for the second tournament in a row, the world champions came up short. 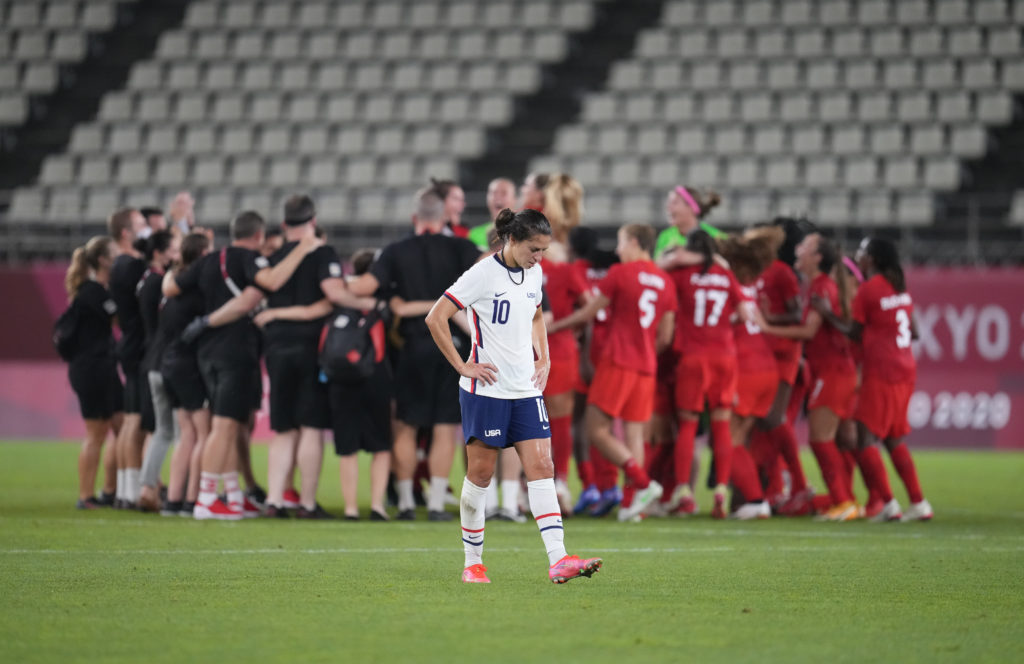 KASHIMA, JAPAN - AUGUST 2: Carli Lloyd #10 of the United States leaves the field during the Women's Semi-Final match between USA and Canada on day ten of the Tokyo Olympic Games at Kashima Soccer Stadium on August 2, 2021 in Kashima, Japan. (Photo by Brad Smith/ISI Photos/Getty Images)

In his statement, Trump praised the American players who refused to take the knee prior to kick off, describing them as "patriots".

"If our soccer team, headed by a radical group of Leftists Maniacs, wasn't woke, they would have won the Gold Medal instead of the Bronze," Trump wrote.

"Woke means you lose. Everything that is woke goes bad, and our soccer team certainly has.

"There were, however, a few Patriots standing. Unfortunately they need more than that respecting our country and national anthem.

"They should replace the wokesters with Patriots and start winning again.

"The woman with the purple hair [Rapinoe] played terribly and spends too much time thinking about Radical Left politics and not doing her job!"