A €15,000 house in Ireland, dubbed the country’s cheapest, has British-based buyers queuing to snap up bargain properties at a special auction.

One-in-10 buyers expected to be among those who flood to the Allsop Space sale in Dublin this week will be from this side of the Irish Sea.

And in a month when a London garage sold for more than £500,000 and with the average price of a home in Dublin at €329,719 and rising, it’s no surprise buyers are focusing their attention in particular on the Irish countryside.

“That property has garnered headlines all over the world and been dubbed ‘the cheapest house in Ireland’,” said Robert Hoban, director of auctions at Allsop Space.

“The north west of Ireland is in a very difficult situation at the moment because you have very high unemployment, very low population and a big oversupply of property. So you combine that with the fact it is a property that needs a lot of work done to it to be finished and you end up with a low reserve price.”

Since launching the catalogue for this week’s auction, Allsop’s 14th, it has been accessed in 130 countries around the world. That includes almost 9,000 hits from Britain, which is second only to Ireland in terms of interest.

Of the 1,500 properties sold in Allsop auctions to date, 120 have been snapped up by British buyers, Mr Hoban said, accounting for £11.5million in sales. 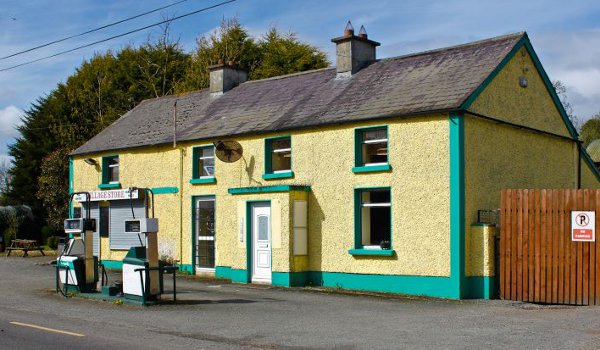 €15,000 could also buy you these detached mixed-use buildings in Co Meath

Buyers from Britain are showing interest in holiday homes on the west coast with the cut-price Donegal property being a prime example, Hoban added.

While little work has been done on the interior, its condition is similar to the Southwark garage described as an “empty shell” that fetched £550,000 last month after a “frenzied” bidding war.

On top of that, the detached home is well-located, sitting 10 miles from Letterkenny and 20 miles from Donegal Town, and spacious, offering just under 1,800 sq ft of living space.

It is just one of four properties on offer at Friday’s auction with a reserve of €15,000.

The others include a detached one-bedroom bungalow in Mullingar and mixed-use buildings in Drumcree, Co. Meath and Kilbeggan, Co. Westmeath.

At the other end of the auction’s spectrum is Park House, a giant office block in north Dublin with a reserve range of €5.5m to €6m. Extending to around 115,000 sq ft, it is expected to be the highlight of the sale.

“We have a huge active audience from both Irish people based in the UK and British people themselves,” Mr Hoban said.

All the lots on offer are distressed properties, meaning they are either under bank foreclosure or being sold by their mortgage holder.

The 244 properties listed for the May 2 sell-off is up a fifth on Allsop’s previous record and its reserve total is around €37m (£30.5m).

Mr Hoban said interest in selling properties at auction has grown due to instability in the Irish property market following the financial crash.

“We started doing this in April 2011 because we recognised that there is massive insecurity and massive uncertainty in where values are at,” he said. “In 2010 the landscape was a nightmare scenario because the market had crashed, estimates of values were between a write-down of 40 to 80 per cent in values, nobody knew.

“But we knew there were lots of people who wanted to buy property. They had the money, but they didn’t know what to buy or how much they should be paying, so we said that we need an auction.”

By: Sharon Ni Chonchuir  -  1 minute ago