IF YOU didn't laugh, you'd cry.

An excerpt from a British children's encyclopedia from the 1950's is gaining traction online today for it's less-than-positive description of the "Three distinct types found among the Irish people".

Reddit user u/mapryan first drew attention to the weirdly specific but downright wrong descriptions as he posted the excerpt with the title "I made the mistake of looking up Ireland in a British children's Encyclopedia from the 1950's"-- and mistakes were definitely made.

The author is of the opinion that there are three specific types of people to be found on the Emerald Isle, and one of them is basically the long-extinct Neanderthal.

They're not even subtle about it.

"There is a very primitive type still to be met with in the west. it is the one which was formerly used in Irish caricatures by unfriendly observers." (So basically, they admit this is a racist and untrue caricature, but that's not going to stop them.)

"The forehead is low, the mouth and lower part of the face are large, there is an inclination to a squat figure, and the general effect is that of a survivor from an early period in human history". Jesus, tell us how you really feel. 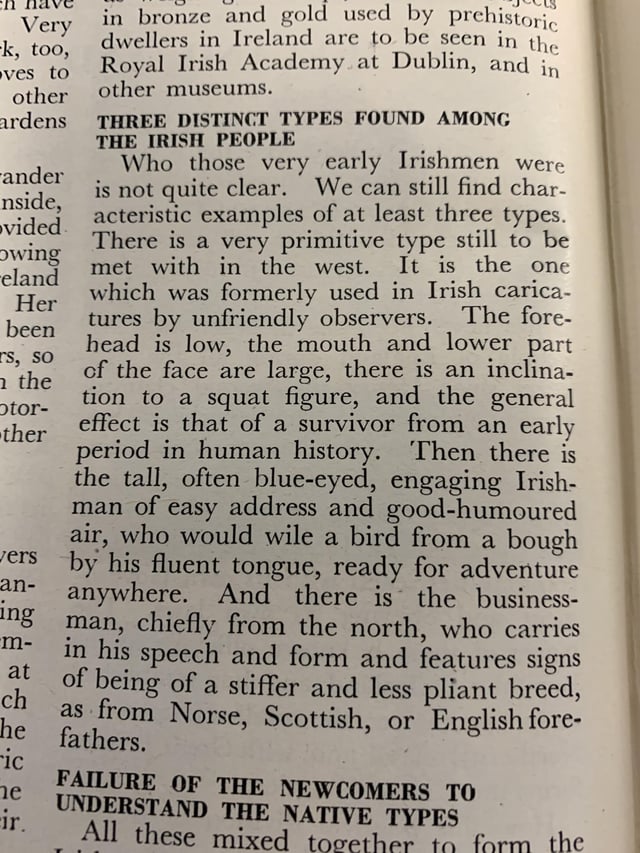 The second 'type' of Irish person is the type which usually appears in American romance movies, and not in Eyre Square Supermac's during RAG week or battering a sliotar down the field.

"...the tall, often blue-eyed, engaging Irishman of easy address and good-humoured air, who would wile a bird from a bough by his fluent tongue, ready for adventure anywhere."

But it's not all bad news-- the description of the final 'type' of Irish person is actually quite flattering.

"The businessman, chiefly form the north, who carries in his speech and form and features signs of being a stiffer and less pliant breed"...

"...From Norse, Scottish, or English forefathers".

American man denied visa as Irish wife refused to identify as 'British' is free to live in the UK, court rules