ENGLISH boxer Ohara Davies has been forced to publicly apologise after tasteless comments directed at Irish fighter Paddy Barnes and his wife Mari.

The super-lightweight from Hackney was involved in an online squabble with Barnes when he made the remarks about the newlywed couple's looks.

Davies was commenting on a tweet by Barnes showing the Co. Antrim native alongside Mari on their honeymoon in Dubai.

Barnes shared the original image alongside the words “think I got a little bit too excited today at the top of the Burj Khalifa”.

The picture was liked 3,500 times but Davies, who has been involved in twitter spats with Barnes and fellow Irishman Carl Frampton before, sunk to a new low when he directed a crass comment towards the couple.

In a tweet, since deleted, Davies replied saying: “Nose job pending for you, face job for wifey.”

Davies obviously had some time to dwell on his classless jibe as he has since issued a full and frank apology to Barnes' wife. 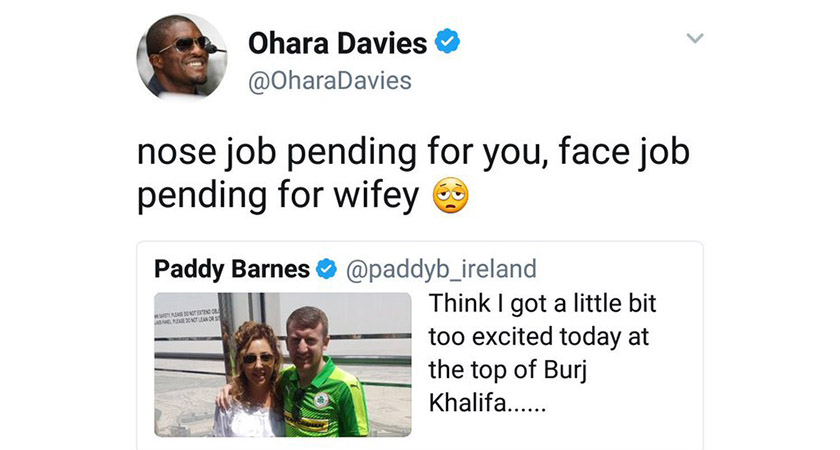 "Apologies to Paddy Barnes' wife for the tweet sent yesterday. It was a low blow and came from a place of immaturity,” Davies said.

“She had nothing to do with mine and his beef over social media."

Barnes has not responded to the apology.

Davies, 25, is known as much for his social media spats with other fighters as for his boxing ability.

The Londoner had a 15-0 win-loss ratio until recently but lost his perfect record against Scotland's Josh Taylor just over a fortnight ago.

Barnes has won all three of his professional bouts, with the 30-year-old’s latest victory coming against Romanian fighter Silviu Olteanu in Belfast last month.