"POOR OLD Ireland! It is in a dreadful condition."

An Irish-American Reddit user has shared a piece of Irish history with the r/Ireland community as he posted a photo of a letter sent by a schoolteacher in Mayo to her uncle in New York.

The letter is dated August 26th, 1922, four days after the death of revolutionary Michael Collins and right in the middle of the Irish Civil War, which is described in the letter as "a dreadful condition".

The letter is a fascinating glimpse into the lives of ordinary Irish people during some of the most brutal and uncertain times in our nation's history, and even includes some early form of 'text talk' which is still used today, with the writer using T.G to mean 'Thank God'.

The letter describes the bloody battles between Republicans and Free Staters in the town of Swinford, County Mayo, and makes the announcement of the "worst news of all", the death of Michael Collins.

But it also contains general updates of the wellbeing of family members-- who is getting married, who is studying where and who has moved abroad, and acts as a reminder of the similarities between modern Ireland and the Ireland of before-- which really wasn't that long ago.

The letter, in full, reads:

We received your letter a few days ago, and we were delighted, of course, to hear that you are well, as we all are, T.G., notwithstanding the awful times in which we are living.

Poor old Ireland! It is in a dreadful condition-- nothing but ambushes, etc., etc.

The West seems to be suffering the most just now. There was a battle fought in Killasser about a fortnight ago, around, at least not far from Killasser Chapel, between the Republicans on the "run" and the Free State Army.

We were, for about two hours, listening to the firing. It was dreadful to stand and listen to the "Armoured Car" spitting out fire in all directions. Some of the fellows were hiding in one of (redacted) fields of oats.
Swinford was recaptured by the Republicans about five weeks ago, and the little garrison of "Free Staters" held out until the barracks roof was falling in after the Republicans set fire to it. They then surrendered, and the Irregulars took their arms and ammunition, etc.

The Irregulars next set fire to the Courthouse, and from our own door we could see the black fumes of smoke rising up above the hills from the town.

Previous to this, all the bridges including Cloongullane and Ballalaghan were blown to pieces and trees felled across the roads, etc. I could thus keep on for a day relating all the different things that have happened around this part alone.

The Swinford people cannot sleep any night with the firing, although there is a strong "Free State" garrison there now. The Irregulars seem determined however things will turn out. I suppose you get just as good an account of things over there as we get here and perhaps more.

For months we did not receive one letter here until just lately, and there are no trains any nearer than Foxford, so that there are carts on the road every day drawing stuff from Ballina. It is only lately itself the trains began to run to Foxford.

This is all the news I have this time, the latest and worst news of all is Collins' death, but of course I know you will know all about it. 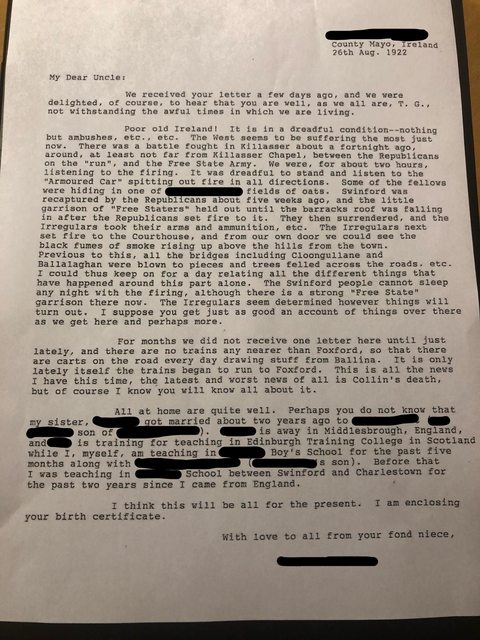 All at home are quite well. Perhaps you do not know that my sister (Redacted) got married about two years ago to (R), son of (R). (R) is away in Middlesborough, England, and (R) is training for teaching in Edinburgh Training College in Scotland, while I, myself, am teaching in (R) Boy's School for the past five months along with (R), (R)'s son.

Before that I was teaching in (R) School between Swinford and Charlestow n for the past two years since I came from England.

I think this will be all for the present. I am enclosing your birth certificate.

With love to all from your fond niece."