BRITISH FOREIGN Secretary Boris Johnson has said a hard border between Britain and Ireland must be avoided post Brexit.

The Secretary of State for Foreign & Commonwealth Affairs made the comments at Westminster today during talks with a delegation from Ireland's Houses of the Oireachtas.

Speaking at the meeting organised by CHAMP - which promotes British-Irish political dialogue and cooperation -  Mr Johnson described Ireland as Britain's number one friend in Europe.

As Britain continues its Brexit negotiations, the Conservative MP for Uxbridge and South Ruislip said he does not want to see a hard border between the two nations.

"We need to work flat out to see that does not happen," he said as he met with delegates at the Foreign Office. "That work needs to begin with understanding."

"The Irish border question cannot be solved until the final state of relations between UK and EU are known," he added. "It is a time for creativity and we need to get going." 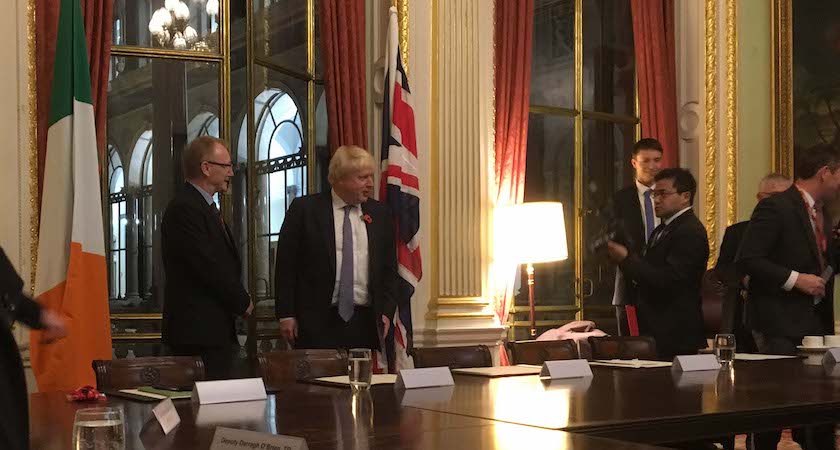 Mr Johnson meet with an Irish delegation in Westminster today

Mr Johnson also called for an increase in trade between Britain and Ireland.

Foreign Secretary Boris Johnson says there can be no hard border between Britain and Ireland after BrexitIn 2015 Ireland exported €15.6billion worth of goods (13.9 per cent) to the UK, while just over a quarter of its imported goods arrived from its closest neighbour.

"We need to intensify trade between our two countries," Mr Johnson said, adding that Ireland can help Britain to get the green light from Europe's member states.

A reception hosted by Conor McGinn - Chair of the All-Party Parliamentary Group on Ireland & the Irish in Britain - is taking place this evening at Westminster.