DUBLIN CITY councillors have voted overwhelmingly in favour of boycotting the upcoming ceremony to commemorate members of the Royal Irish Constabulary and Dublin Metropolitan Police.

The ceremony, due to take place on January 17 in Dublin Castle, has proved controversial since its announcement, with several Lord Mayors and Sinn Féin already voicing their intention to boycott the event.

Now Dublin City Councillors have also voiced their intention to boycott, as a vote undertaken yesterday resulted in 38 councillors in favour of boycotting as opposed to just 10 councillors against.

The wording of the motion made clear the feelings of the councillors, labelling the event as "obscene" and referencing the RIC and DMP's "intolerable record of barbarism" while in power in Ireland prior to independence.

"This council objects to the proposal to commemorate the Royal Irish Constabulary and the Dublin Metropolitan Police at a ceremony in Dublin Castle on the 17th January.

"The RIC and the DMP had an intolerable record of barbarism in this country while carrying out British rule in Ireland.

"This was the police force that brutalised and murdered workers in Dublin during the 1913 lockout.

"This was the force that identified those to be executed after the Easter Rising. 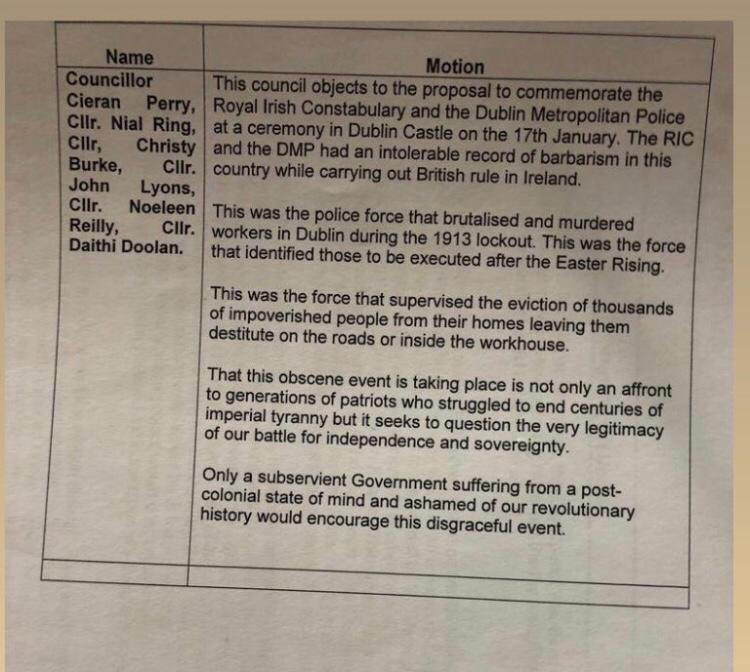 Dublin City Councillors voted in favour of the motion at a meeting yesterday evening, 6 January.

"This was the force that supervised the eviction of thousands of impoverished people from their homes leaving them destitute on the roads or inside the workhouse.

"That this obscene event is taking place is not only an affront to generations of patriots who struggled to end centuries of imperial tyranny but it seeks to question the very legitimacy of our battle for independence and sovereignty.

"Only a subservient Government suffering from a post-colonial state of mind and ashamed of our revolutionary history would encourage this disgraceful event."

Yesterday, Taoiseach Leo Varadkar said it was "regrettable" that politicians were intending to boycott the event, saying that "ten or fifteen years ago it was very controversial to commemorate the deaths of soldiers in World War One, as people felt they shouldn't be remembered because they fought for the United Kingdom, they fought for the British," adding "That has changed".

"I think it's a shame that people are boycotting it but the government stands over the decision to uphold the event."