RESEARCHERS have launched a nationwide appeal for people with four Irish grandparents to take part in a new DNA project to help map the genetic history of Ireland.

Irish DNA Research Project, launched by British ancestry firm Living DNA, is appealing for anyone with four Irish grandparents all born within 50 miles (80 kilometres) of each other to take a simple DNA test.

By focusing on people whose grandparents were all born close by, Living DNA hope to build up the most detailed as possible regional map of Ireland’s genetic history. 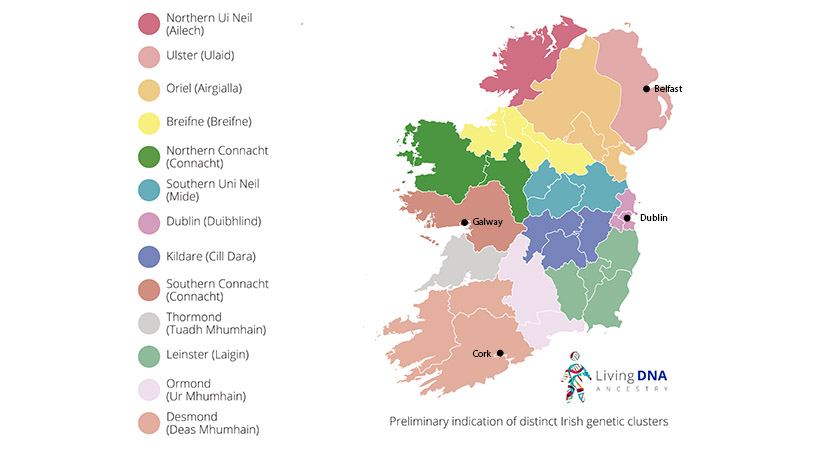 Which county in Ireland does your county's DNA match with the most?

Speaking to The Irish Post, the managing director of Living DNA, David Nicholson, said: “We’ve already worked on things like the People of the British Isles project, which has shown for the first time the exact part of the UK a person’s genetics are from.

“But with Ireland, we had only previously broken it down into north Ireland and southern Ireland. Because there are over 100 million people of Irish ancestry around the world, it makes sense to try and delve deeper.

“All those people want to know where their roots come from and how to connect with those. The data gathered in this project will enable anyone to pinpoint exactly where their ancestors came from within Ireland.

“Once we have that data, we will work with academics, historians and the genetics team to bring all of the information we gather to life.”

Two leading Irish genealogists – Gerard Corcoran and Dr Maurice Gleeson – are closely involved in the project to ensure it is as academically accurate as possible.

David Nicholson added: “This is a fantastic opportunity for members of the Irish public to be part of an evolving science project to give everyone in the country a better chance to find out more about where they really come from.”

The first 10 qualifying individuals to register from each region will receive a free ancestry DNA test and lifetime membership to Living DNA – worth €159.

All subsequent qualifying participants will be able to claim a 30% discount off the test and lifetime membership.

For more information on the project and how to take part, visit Living DNA's website here.