Doddie Weir at the Scottish Parliament in 2019 as part of his MND awareness efforts (Image: Jeff J Mitchell/Getty Images)

IRISH rugby clubs have joined in the tributes to former Scotland and British and Irish Lions lock Doddie Weir, who has died at the age of 52.

Weir's family announced his passing in a statement issued through Scottish Rugby on Saturday evening, in which they described him as 'an inspirational force of nature'.

The former Newcastle Falcons player revealed in 2017 that he had been diagnosed with motor neurone disease (MND).

Later that year he set up a charity, the My Name'5 Doddie Foundation, which has gone on to raise £8million for MND research.

Following news of his death, the IRFU called Weir 'a giant of the game'.

"On behalf of the rugby family here in Ireland we send our condolences to the Weir family," read a statement.

"Doddle was a giant of the game. A legend on and off the pitch and an inspiration to all of us.

"He has left an indelible mark on the game. May he rest in peace." 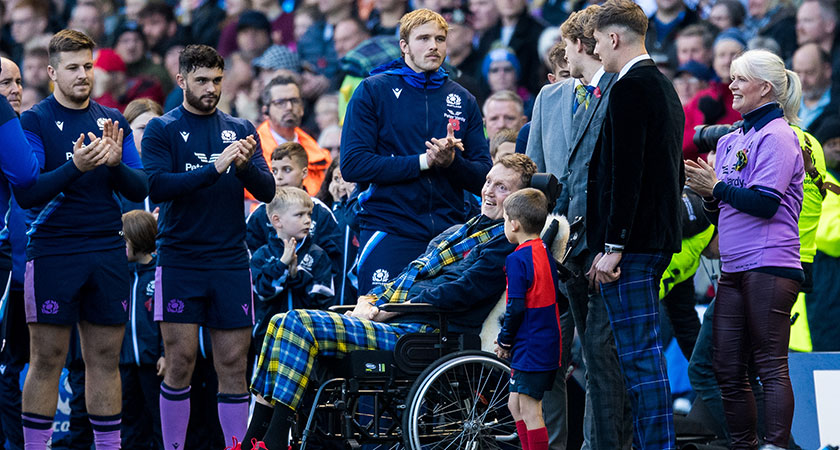 Weir presents the match ball ahead of the Autumn Nations Series match between Scotland and New Zealand at Murrayfield earlier this month (Image: Ross Parker/SNS Group via Getty Images)

Connacht and Leinster offered their condolences to Weir's family, while Bernard Jackman, who played for both provinces, described him as a 'wonderful man'.

"Doddie Weir inspired so many people on and off the pitch and during his battle with illness he gave people suffering from MND a voice," added Jackman.

"My thoughts are with his family and friends."

"As the great rugby man that he was, a great character in the game, our thoughts are with his family and friends and all his loved ones," said Cullen.

"It's a very difficult time."

"How he conducted himself and the funds that he raised. He was a great rugby man."

Leo Cullen speaks about Doddie Weir after the news broke of his passing today.

Meanwhile, in a statement posted online, Muster Rugby said: "We are very sorry to hear this news and our thoughts are with the Weir Family & our friends in the wider Scottish Rugby community. Rest in peace, Doddie."

Weir was part of the successful British and Irish Lions tour of South Africa in 1997.

In a statement, the Lions described Weir as 'a legend'.

"We're devastated to hear of the passing of Doddie," read the statement.

"A Scotland legend, his determination to raise awareness and help find a cure for MND epitomised his personality.

"Our thoughts are with his family, friends, all connected with Scottish Rugby and his charity." 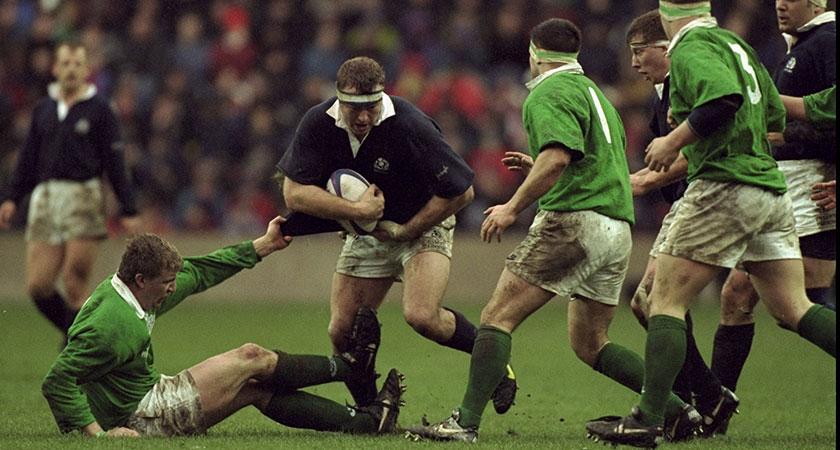 Weir charges through the Irish defence during the then Five Nations match between Scotland and Ireland at Murrayfield on March 1, 1997 (Image: Andrew Redington /Allsport)

Weir made his Scotland debut in November 1990 and in an international career spanning 10 years, scored 19 points in 61 appearances.

Following his diagnosis and ensuing charity work, Weir was appointed an OBE in 2019 for services to rugby and MND research.

Later that year, he received the Helen Rollason Award at the BBC Sports Personality of the Year show for raising awareness of MND through his charity work.

The award is presented to a sportsperson who shows 'outstanding achievement in the face of adversity'.

Established in 2018, the Doddie Weir Cup is a perpetual trophy awarded to the winner of matches between Scotland and Wales.

Jill Douglas, CEO of the My Name'5 Doddie Foundation, said they would continue the work begun by Weir.

"He inspired us every day with his positivity and energy and was fully committed to the work of the Foundation he launched with his close friends in November 2017," she said.

"My Name'5 Doddie Foundation continues to shine a light on MND and the need to seek meaningful treatments and one day, a cure for this devastating disease." 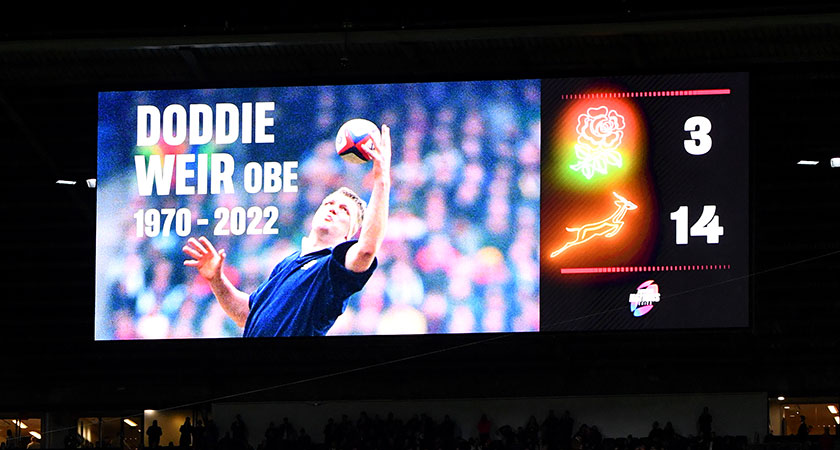 A message in remembrance of Weir during the Autumn International Series match between England and South Africa at Twickenham on Saturday (Image: Tom Dulat/Getty Images)

In their statement, Weir's family paid tribute to his legacy.

"MND took so much from Doddie, but never his spirit and determination," they said.

"He battled MND so bravely, and whilst his own battle may be over, his fight continues through his foundation, until a cure is found for all those with this devastating disease."

Weir is survived by his wife Kathy and sons Hamish, Angus and Ben.