AN IRISH fisherman has struck gold after catching a massive 600lbs bluefin tuna worth an incredible €3 million.

Well, he would've struck gold, had he not done the honourable thing and let the tuna go.

The huge fish, caught off the coast of west Cork, measured an incredible 8ft long (think Yao Ming - but bigger).

It's the largest specimen caught in Irish waters this year and is about as big as Atlantic bluefin tunas tend to get. It was so large that it couldn't be properly landed and had to be measured in the water, according to Echo Live.

It was caught by Dave Edwards of Courtmacsherry-based West Cork Charters as part of an ongoing catch and release programme aimed at establishing population numbers for the fish in the north east Atlantic. 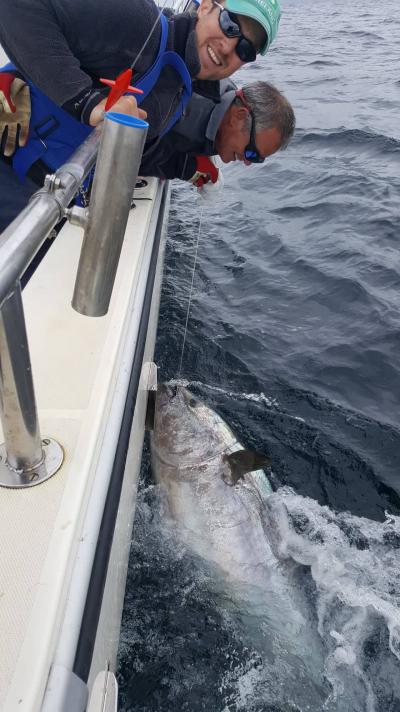 Dave caught it on Sunday about three miles south of his base in Courtmacsherry with the help of fellow anglers Darren O'Sullivan from Cork city and Dutchman Henk Veldman.

"They are much more common up in Donegal Bay where they follow the herring," said Dave.

"They are more unusual down here but tend to be much bigger when they do show up. This is the first one caught south of Donegal Bay this year and it really was a big fish."

Dave's boat is one of 15 perusing the soul and west coasts of the country taking part in the catch and release programme.

"It's getting close to the end of the season so we were beginning to lose hope that we would see any," Dave added.

"Then on Sunday we had a huge fish on the reel that must have been closer to 10 feet in length but after a two and a half hours it got away. We knew they were out there then though and so it turned out when we managed to tag this one."

Bluefin tuna is a prized delicacy in Japan where individual fish can sell for tens of thousands of dollars, but very few are as big as the one caught by Dave, and had he chosen to, he could've cashed in on one heck of a reward.