THE IRISH government is launching a campaign to support the LGBTQ community to mark International Coming Out Day.

The campaign - called Live Out Loud - has been designed to highlight the diverse experiences of those who have come out around Ireland.

The aim of the initiative is to break down the taboos of homosexuality and transsexuality and to offer all members of the wider LGBTQ+ community a place to share their experiences and receive support.

According to the Irish LGBTQ+ group BeLonG To, 58% of young LGBTQ individuals admit that coming out is the hardest challenge they face, and it's the main reason people come to them for support and advice in the first place.

'Coming out' is the process of becoming aware of and acknowledging one's gender identity, gender expression, or non-hetero-normative sexual orientation. 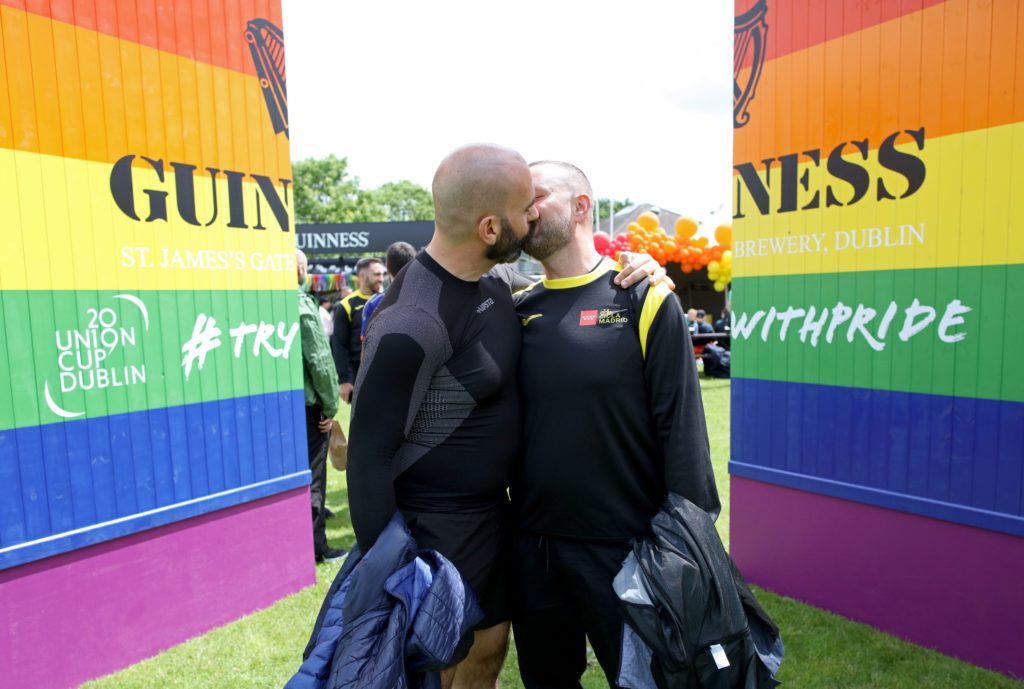 Rugby players kiss as they pose for a picture in the entertainment area at the Union Cup, Europe's biggest LGBT+ inclusive rugby tournament in Dublin, Ireland on June 8, 2019.

Speaking about the new Live Out Loud campaign, Minister for Equality Roderic O'Gorman said: "The Government is putting together a website where young people can put in submissions, just talking about their own experiences, just to show people the diversity of situations that people are coming out in.

"We know that coming out can be a difficult moment in a young person's life. That's why it's really important that we have a campaign showing how valued everybody is in our community.

"So as part of this, the Government is putting together a website where young people can put in submissions, just talking about their own experiences, just to show people the diversity of situations that people are coming out in."

Minister O'Gorman urged young people to come out in their own time and only when they feel comfortable.

"The first thing I'd always say is to come out when you're ready. Talk about it to your own close friends and do it at your pace.

It's estimated that between 6-8% of the Irish population are gay.

Scientific study concludes there is no single ‘gay gene’