THEY SAY unless you have bad times, you can’t appreciate the good times.

The Irish Post FC experienced a chastening first week in the world of fantasy football scoring a paltry 30 points from the first round of games.

With the average points per team across the game standing at around 65, it’s fair to say we got off to a bad start and it could have been even worse.

Jeff Hendrick and James McCarthy both failed to get on the pitch for Burnley and Crystal Palace respectively, while our bright young hope in goal, Mark Travers, didn’t even make it off the bench. Shane Long was left out for Southampton while Michael Obafemi played just 24 minutes, earning a single point in the process.

It was a nightmare.

Those that did play couldn't hit a barn door with a banjo. Conor Hourihane drew a blank against Spurs while David McGoldrick lasted just an hour for Sheffield United against Bournemouth, who eventually had to call on Billy Sharp to come the the rescue. Billy bloody Sharp.

New Blades’ signing Callum Robinson managed the full 90, which was a relief as he is our captain, but despite playing a part in United’s goal failed to get the precious assist meaning his efforts were for next to nothing i.e. two points. 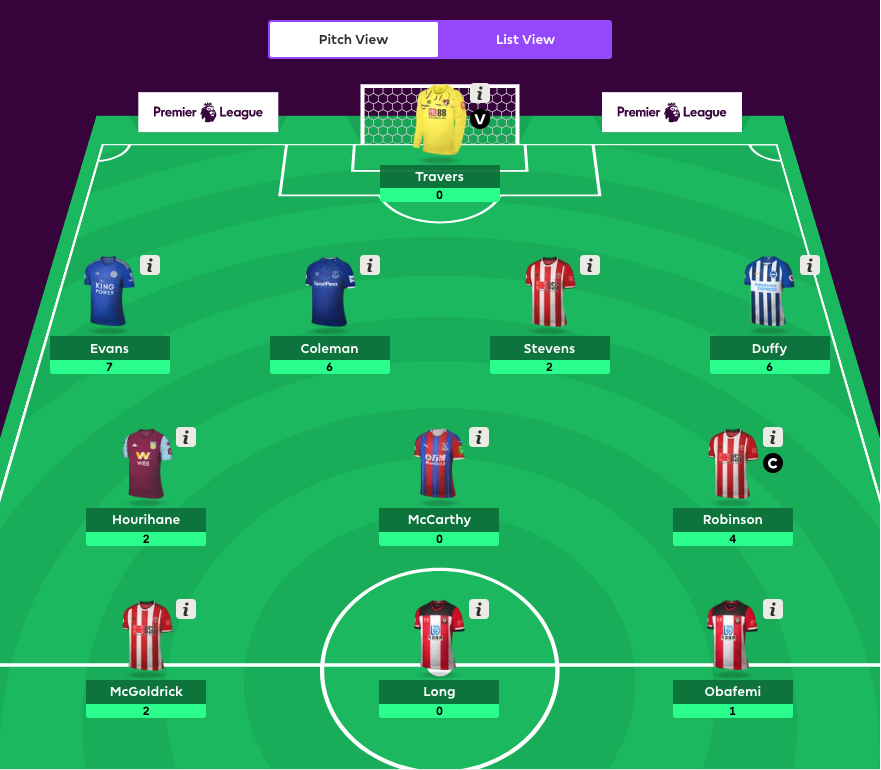 There was better news in defence though.

Clean sheets for Leicester City and Everton saw Seamus Coleman and Jonny Evans bag an impressive 13 points between them, with Evans earning a bonus point for his troubles. With Wolves having a perfectly good goal ruled out, most of Sunday was extolling the virtues of VAR.

Brighton’s Shane Duffy – originally benched amid fears Watford would take the Seagulls to the cleaners – earned a recall and six points off the back of a surprise 3-0 away win. All of which is extremely awkward of course but we'll take whatever we can get.

Enda Stevens also earned a solid two points for Sheffield United to make it a good day for the Irish Post FC’s defence.

With that in mind, big changes are afoot for week two.

With little other options in goal, Travers keeps his place in the vain hope Bournemouth boss Eddie Howe will grant the Irishman a recall to the starting line-up. What did he do wrong? Given his replacement, Aaron Ramsdale, conceded on his debut, there is hope. Come on Eddie!

After an opening weekend in which our defence shone, this week sees us double down on the backline, using the “free hit” card to install a five-man defence. Yes, already.

It sees Evans, Coleman and Duffy retained with all three set to play at home against Chelsea, Watford and West Ham – three teams that started off with defeats last week.

Northern Ireland’s Jamal Lewis impressed for Norwich in their otherwise disappointing 4-1 loss to Liverpool so gets the nod with a game against Newcastle at Carrow Road in the offing. Here's hoping he can keep Joelinton quiet.

Last but not least comes Matt Doherty, fresh from a win in the Europa League with Wolves. They entertain Manchester United this time around but have a good record against the Red Devils and looked defensively sound against Leicester. Cue a 5-0 thwacking. 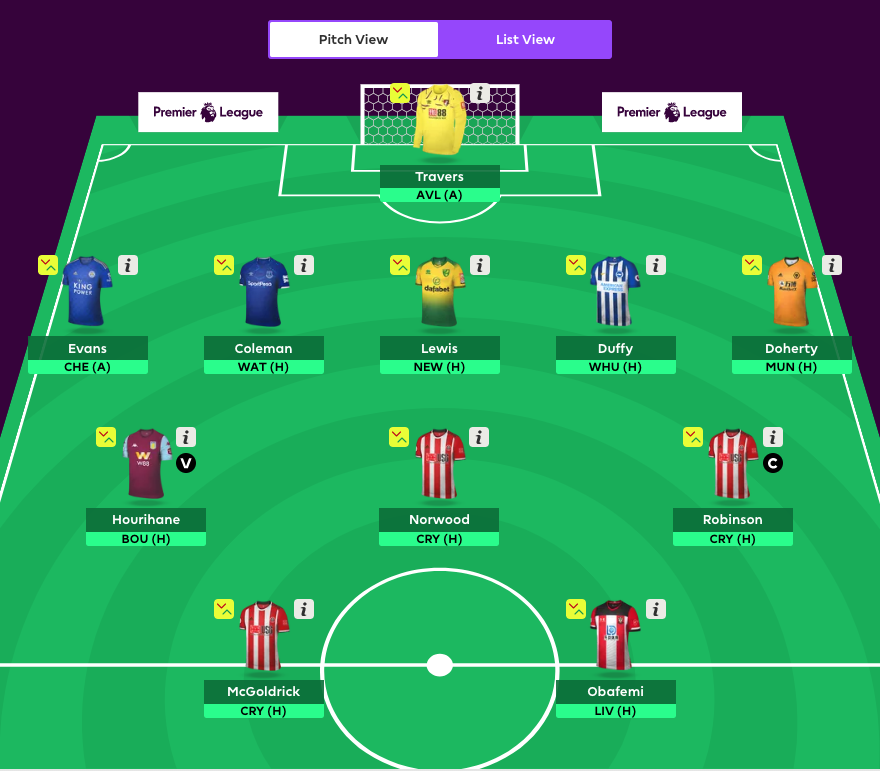 In midfielder Conor Hourihane retains his place with the hope that Aston Villa’s home encounter with the defensively-porous Bournemouth will mark a return to goalscoring form for the Irishman. Sheffield United’s Oliver Norwood gets a call-up after featuring for Sheffield United, which gives him the edge over most of our squad.

With the Blades set to host Crystal Palace at Bramall Lane, we have backed a big win for the home side, so much so that Callum Robinson has been retained as captain.

McGoldrick also retains his place while Southampton’s shellacking at the hands of Burnley could convince Ralph Hassenhuttl to play Obafemi from the start or at least a little earlier against Liverpool. We’re not expecting much though. It is Liverpool.

That leaves bench warming goalkeeper Michael McGovern on the sidelines along with Shane Long, Jeff Hendrick and James McCarthy. Robbie Brady remains out with injury. A weekend of low-scoring games would do wonders for our side. Boring for the rest of you, of course, but great for us.