THE VICTIM of an alleged rape attack by two Irish rugby players sobbed while giving graphic evidence in court.

The woman, who has not been named, appeared for the first time in Belfast Crown Court today.

According to RTÉ, the 21 year old woman wiped away tears as she told the jury: "Rape is a game of power and control.

"They rely on your silence. The only way you take the power back is when you actually do something about it."

Stuart Olding, 24, and Paddy Jackson, 26, are accused of raping the same woman at a property in south Belfast in June 2016.

Both men deny the charges.

The woman told the court she was first attacked by Mr Jackson.

'Next thing I remember is being face down on the bed and he is having sex with me,' she claimed.

She cried as she recalled: "He grabbed my trousers by the waistband. He undid them and pulled them down to my knees.

"You know, see in that moment you think you are going to kick and scream and fight, but it doesn't work like that. Look, you just freeze.

"I knew where this was going but it happened so quickly.

"He sort of pushed me down on the bed.

"But because I was wearing white trousers, they were quite tight, and when he pulled them down they caught on my knees and I couldn't actually move.

"Next thing I remember is being face down on the bed and he is having sex with me," she said.

Two other men are also on trial on charges connected with the alleged incident on 28 June 2016.

Blane McIlroy, 26, from Royal Lodge Road, Ballydollaghan, Belfast, is accused of one count of exposure.

Rory Harrison, 25, from Manse Road, Belfast, is charged with perverting the course of justice and withholding information.

Both have also pleaded not guilty. 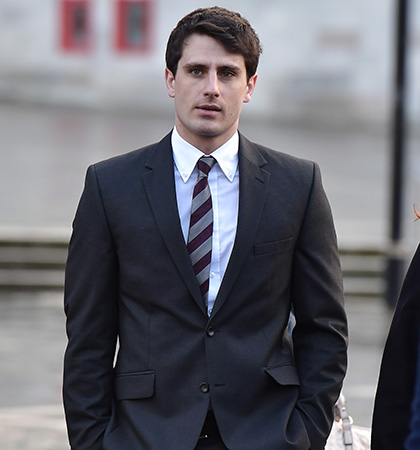 The woman said the alleged incident happened in a bedroom at Mr Jackson's home after a night out Ollie's, a club in Belfast's Merchant Hotel, where she said had drunk one and a half large glasses of wine and three double vodkas during the course of the night.

She had nothing alcoholic at Mr Jackson's, the court heard.

It emerged she had kissed Mr Jackson in the same bedroom earlier in the night, but had made it clear she was not interested in anything else.

When asked if Mr Jackson had tried to take things further at that time, she replied no.

It was when she returned to the bedroom to retrieve her clutch bag because she wanted to go home that the alleged rape happened.

'I look at Patrick Jackson straight in the eyes and said 'please no, not him as well,' she said.

She added: "Verbally, I had already told him I did not want this going any further. There was nothing physically about me that said to keep this going.

"He knew I did not want this to happen and he kept going."

At some point, she claimed, the bedroom door opened and Stuart Olding walked in.

"My heart just sank," the woman said. "I knew what was going to happen.

"I look at Patrick Jackson straight in the eyes and said 'please no, not him as well.'"

She said that at this point Mr Olding also attacked her.

As the alleged attack was taking place, it was claimed the door opened again and a female voice was heard.

The woman feared she was going to be filmed.

She said: "I immediately turned my head away. I was so worried I was going to be filmed or something, because they were all taking loads of photos downstairs."

She said when Mr McIlroy allegedly appeared at the door, naked, the woman said her "fight instincts" kicked in.

"I thought, this is not happening again," she said.

"It was at that point my fight instincts kicked in. There was not a chance this was going to happen again."

She claimed that as she fled, stuffing her underwear in her pocket, she told them: "How many times does it take for a girl to say no for it to sink in."

The woman said she ran downstairs and out of the house but had to return to get her mobile telephone in order to call a taxi, and then Mr Harrison approached, she claimed.

The woman said: "I was running from the house when the front door opened and Rory Harrison came after me. At first I panicked but then I realised he was asking if I was okay.

"I obviously wasn't okay. I was crying a lot and he would have seen the blood on my trousers and stuff like that." 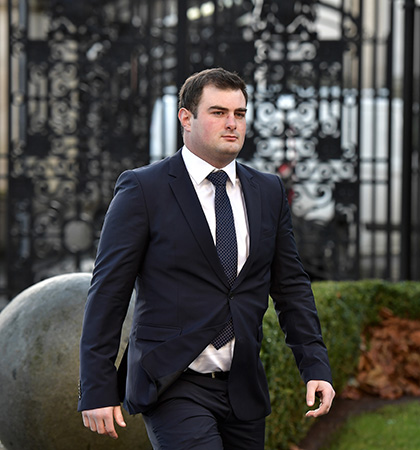 Rory Harrison helped the woman get home after the alleged attack, she said. (Picture: by Charles McQuillan/Getty Images)

Mr Harrison and the woman shared a taxi, and when they arrived at her house he asked if there were others in the house and would not accept payment for the cab.

She added: "I was actually very grateful. He really couldn't have done enough for me.

"I have absolutely no complaint with Rory Harrison."

During the hearing the woman was also questioned about her initial reluctance to report the incident to the police.

"I wasn't going to go to the police," she said. "You just don't think they are going to believe you.

"I really did not want to take things further because you are so embarrassed this has even happened to you.

"I didn't want people finding out. I knew if I went to the police I would have to say something to my family at some point."

She confided in two friends and after attending a rape crisis centre in Belfast, decided to go to the police.

She told the court she was glad to have spoken out. "It's the best decision I made," she said.

The case, which is in its third day, is scheduled to last for five weeks.

Outlining the defence yesterday, Mr Toby Hedworth QC said Mr Jackson was “shocked and horrified” at the claims, and that at the party the alleged victim appeared to be “into him” and that she touched him “in a flirty way," and that she was “following him around and trying to chat to him”.

Mr Jackson, according to Mr Hedworth, agreed that nothing “untoward” happened when they first went to the bedroom.

He said the complainant undid his trousers and performed oral sex on him.

He said that Mr Olding then entered the room not realising it was occupied and that the alleged victim “stopped fellating Jackson and started doing it to Olding”.

Mr Hedworth added: “He (Jackson) went on to say they didn’t have vaginal sex because she asked if he had a condom and he did not. He said that there was a small amount of blood on his fingers and the bed but he presumed this was from her period, not an injury.”

In interview, Mr Olding said when he entered the room the complainant “was straddling Paddy” and that he “made to leave but she held her hand out to him."

He said the complainant then performed oral sex on him.