SCHOOL CHILDREN in Doonbeg, Co. Clare had the chance encounter of a lifetime as they met with US President Donald Trump at his golf resort earlier today.

The children of Clohanes National School, a primary school with just 27 pupils in Cloonnagarnaun near Trump’s resort in west Clare, had hoped to spot the President while he enjoyed a round of golf, but in the end they got a lot more than just a mere sighting of the big-man.

After waiting next to one of the tees, waving American flags, secret service agents informed the class that the President had noticed them and wanted to come and speak with them.

Now, usually, standing at the tee, causing a visual distraction for some of the players would see you thrown off a golf-course, but not on this occasion.

The children and teachers were left “absolutely gobsmacked” as the President walked over, chatted to them for a while before posing for photographs.

“They were absolutely gobsmacked; they just can’t believe it. They have just had an absolutely amazing, amazing morning,” said Principal Aideen O’Mahoney. 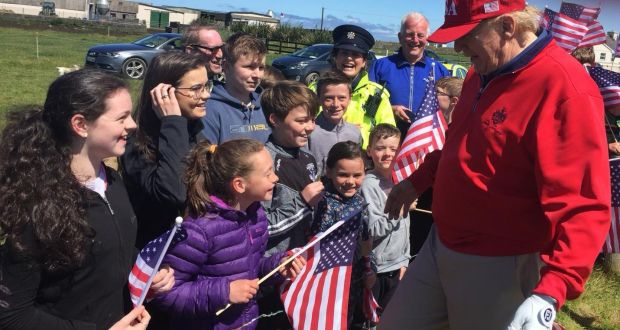 “It was lovely. It was totally unexpected. It wasn’t planned; there was nothing organised. We just decided to take it on ourselves to come to the hill and maybe just wave a flag,” she added.

13-year-old Lucy Shanahan, who was there with her younger siblings said: “The primary school came over to see him play golf and then a secret service person came and said you can move up a bit, so then another came and said that we could go up another bit and then someone said the President wants to meet us all so he came down to us.”

“He was very nice,” she continued.

“He was asking was there going to be any future Presidents there, or did we like golf and all that.”

Asked if she was nervous, Lily said: “Kind of, not really.”

Her sister Abbi said they could see Mr Trump playing golf and suggested to reporters that the President had hooked one into the bunker while they were watching.

“One of them [Donald Trump’s golf balls] landed down on the dunes anyway,” she said.

“I debated whether or not to get out of bed this morning. It was unreal, so surreal. He was so sound like. He came down and asked were we interested in golf.”

Their nine-year-old brother Rory said of meeting the US President: “It was kind of fun.”