Eight ball in focus on a pool table.

AN Irishman has been revealed as the mastermind behind a video of a brilliantly executed 500ft pool table trick shot that went viral this week.

Shane O'Hara, a champion pool player and general manager at Allstars Sports Bar in Bristol, became an overnight internet sensation after he posted an incredible video of one shot covering 500ft through a sports hall, travelling down stairs and up, down and across a series of tables and other obstacles.

Shane, who is originally from Dromahair in Co. Leitrim and later lived in Galway for 10 years, moved to Britain two years ago.

Speaking to The Irish Post today the self-confessed Galweigan joked although his heart is Ireland his next stop might be LA after the lightening success of his trick shot video.

He said that the trick emerged “as a cheesy marketing idea” but it quickly racked up millions of online views - 1.4million alone on the Allstars Sports Bar Facebook page alone.

Watch the incredible trick shot below...

“If I had known what would happen I would have made a pack of money out of it,” he said while on route to BBC studios in London for a TV appearance.

“When I got in the taxi the driver asked why I was going to the studios, I told him about the video and he said that he had seen it. I think that’s a 100 per cent success rate,” he said.

“I was just trying to generate some extra business for the bar by posting the video to our social media accounts. I had no idea how it would take off, I don’t feel that I deserve all this attention at all,” he said.

“I went into the office, thinking I’d just do some paperwork for the morning but the views kept jumping on the video and my phone kept ringing with media contacting me. I’ve only had 35 to 40 hours of exposure, it’s great but it’s exhausting.”

He added: “It hasn’t taken off in Ireland the same way as it has here in the UK and in Europe, even in the US it has been generating a lot of interest over the last 12 hours,” he said.

The viral video genius said that the response proves that there is an audience for his snooker tricks and he plans to film another, even more ambitious putting feat soon. 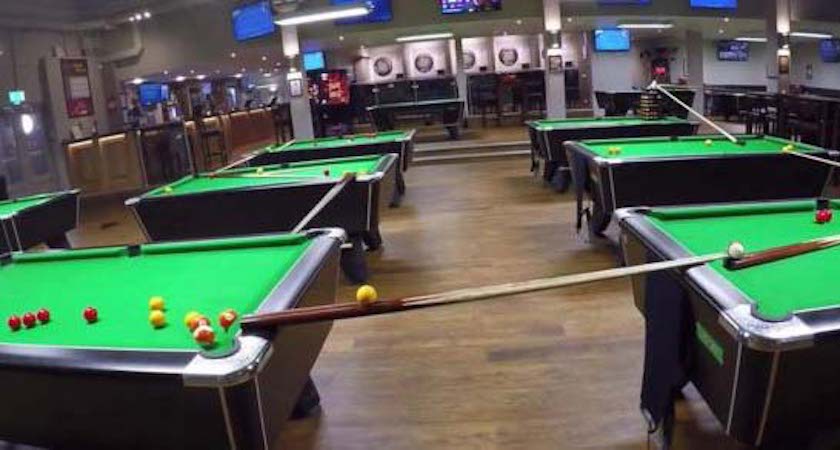 The trick involved a complex maze of tables and cues

The Irishman's next goal is to double the course to 1,00ft and he advised fans to watch out on the bar’s social media for updates.

“The sky’s the limit really and I’ll definitely post another video soon,” he said. “The biggest compliment is when people say that the video is fake."

But the video is definitely not a work of CGI as the BBC video below proves.

Awesome snooker trick shot watched by more than a million but HOW did they do it? Find out .... https://t.co/ex0EjVtxQ7 pic.twitter.com/bNfjeVdc5H

It took O’Hara and his colleague at Allstars Sports Bar Tom Woolman a focused and painstaking 11 hours to set up at the Bristol bar.

It took the two men multiple attempts to set up the shot so that it ran smoothly.

The stairs proved a surprisingly tricky stumbling block initially, but dogged perseverance saw the two men finish the trick shot just before the bar was due to open.

“We had set a deadline that if we had not finished it by 8 o’clock we were going to pull the plug on it. We didn’t speak to each other for the last two hours because we were so frustrated,” he told the BBC.

“It brought a lot of fun and made a lot of people smile but believe me, behind the scenes there was no smiling, it was just a really frustrating experience."

The Irish Post asked the Irishman if he had been offered a raise at the bar in light of his recent sussess to which he joked that discussions would be forthcoming.

He modestly added that he does not feel deserving of all the interest and international praise but said he was happy to go public about the video because “it’s just good, clean fun.”

We were a little late with our Christmas Trickshot this year, but here is our elaborate New Year one (admittedly, also late!) for you to puzzle over. All the best for 2017 from all the staff at AllStars Bristol. Hope you'll agree this effort trumps last year...Enjoy! #PuttOfTheYear

Just the ticket for cricket