Is this how Jesus died? 2,000-year-old discovery prompts fresh questions

THE DISCOVERY of a 2,000-year-old crucifixion victim in northern Italy has provided one of the clearest indications yet as to how Jesus Christ died.

According to the New Testament, Jesus was crucified by his Roman captors in Jerusalem.

Crucifixion is believed to have been practiced by Romans against criminals and, in particular, revolutionaries like Jesus.

However,  archaeologists had previously only found one example of this cruel form of capital punishment in all of their examinations of various Roman burial sites.

That situation changed though with the discovery of markings on the foot of a 2,000-year-old skeleton first uncovered during a 2006-2007 dig in the Gavello municipality of Northern Italy, just 25 miles from Venice.

The skeleton was buried directly in the ground on his back without any of the grave goods traditionally found alongside burials of this period.

Genetic and biological tests also indicated the man was below average height, of slim stature and was somewhere between 30 and 34 when he died.

His small build suggests he may have been underfed - part of the punishment for executed prisoners at the time - while the lack of goods was commonplace among criminal burials.

The most compelling discovery, however, was that of a depressed, unhealed fracture in the right heel bone.

It indicated a metal nail was driven through it, either directly onto the wooden cross or into a footrest attached to a cross.

"We found a particular lesion on the right calcaneus [heel bone] passing through the entire bone," study author Emanuela Gualdi, from the University of Ferrara, told Live Science. 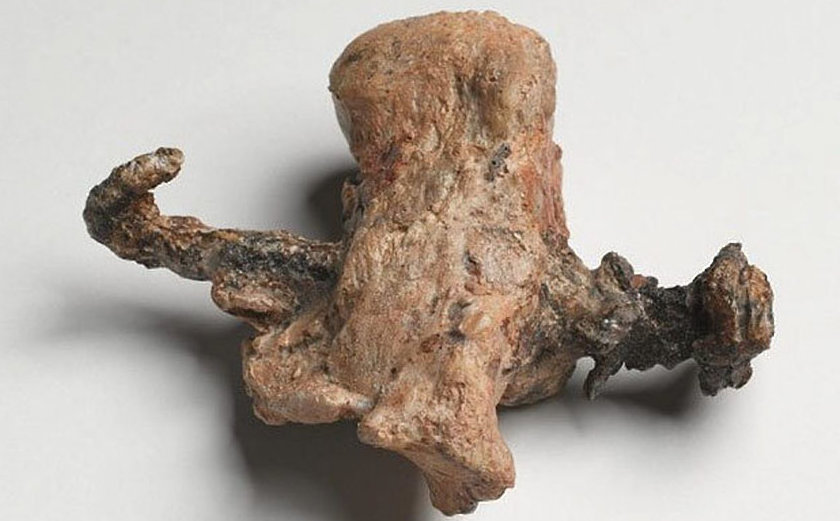 Though there were no signs the man was nailed up by the wrists, Gualdi suggested his arms may have been tied to the cross using rope, which was a practice of the time.

"In the specific case, despite the poorly preserved conditions, we could demonstrate the presence of signs on the skeleton that indicate a violence similar to crucifixion," Gualdi added to Estense.

In instances of crucifixion, bodies were often left to decompose on the cross or be eaten by animals with only a handful taken down and buried.

"Although this brutal type of execution has been perfected and practiced for a long time by the Romans, the difficulties in preserving damaged bones and, subsequently, in interpreting traumas, hinder the recognition of crucifixion victims, making this testimony even more precious," co-author Ursula Thun Hohenstein said.

A form of capital punishment first employed by the Carthaginians, crucifixions were common in Roman society for almost a thousand years until Emperor Constantine banned the practice in the fourth century A.D.

Prior to this new discovery, the only other time remains of a crucifixion victim were discovered came back in 1968, when a 7-inch-long nail was found to have been driven through the heel bone of a man found buried in a tomb in Jerusalem.