Is this where Jesus turned water into wine? Archaeologist's discovery prompts questions

THE LOCATION of Jesus's first miracle may have already been discovered.

The Gospels of the Bible tell us that Jesus performed his very first miracle during a wedding held in Cana of Galilee.

According to the Holy book, when the wedding party discovered they had run out of wine, Jesus had six stone jars filled with water before turning them into the finest red they had ever tasted.

It's widely established that this wedding took place in Cana but in the 2,000 years since the exact location of the town at the centre of the story has been lost.

However, archaeologist Tom McCollough may have already identified the true location of what may be the site of Jesus' first miracle.

According to his study, "Searching for Cana: Where Jesus Turned Water into Wine" from the November/December 2015 issue of Biblical Archaeology Review, the true site of this first miracle has been identified.

McCollough believes that Khirbet Cana, which translates as "the ruins of Cana", is located some nine miles from Nazareth.

He's been working to uncover the site since the turn of the millennium and there has been progress.

Excavations in the area have already revealed Jewish ritual baths, a Roman-era synagogue, along with coins and other artifacts from the era. 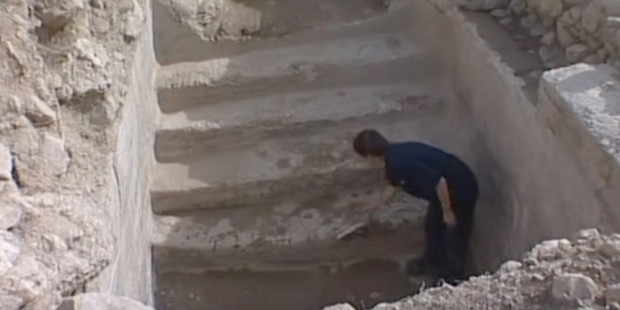 More significantly, these relics and ruins revealed Khirbet Cana to be a Jewish village from the period between 323 BC and AD 324.

The most likely site of the miracle is said to be around an underground network of Christian worship tunnels there which include crosses and graffiti reference Lord Jesus or "Kyrie Iesou" as it is written.

Archaeologists even found what could be an altar along with a sarcophagus lid and crosses.

McCollough's most notable discovery, however, was a shelf with two stone vessels on it - like the ones potentially used by Jesus - while he notes "there was space for another four [stone vessels]"

The findings echo a similar discovery that has gone some way to confirming Jesus did die by crucifixion - if he did, indeed, live on Earth.