A SERIES of intimate letters written by President John F. Kennedy to a secret Swedish mistress are going up for auction in the US.

The handwritten love notes are addressed to Gunilla von Post, a Scandinavian aristocrat Kennedy met a matter of weeks before he married Jacqueline Bouvier in 1953.

They shed light on an affair that continued on into Kennedy’s marriage, an affair JFK describes as a “bright memory of my life” in the eight-page collection, which is expected to fetch over $30,000 at auction.

Written over the course of 1955 and 1956, the collection, which includes one letter and two partial messages, was penned while Kennedy was serving as a senator in Massachusetts.

The notes, which come from Von Post’s personal collection, are written on United States Senate letterhead and predate Kennedy's presidency.

Von Post, who passed away in 2011, previously spoke about the affair in her 1997 memoir titled "Love, Jack." They first met in Cannes in the summer of 1953, a matter of weeks before Kennedy was due to be married.

They would, however, not consummate the affair until August 1955 when, according to RR Auction, they enjoyed “a very blissful and intimate week” together in Sweden.

By then, Kennedy had been married for nearly two years.

The letters offer a fascinating perspective on the tryst with the future President describing Von Post as "wonderful" and speaking of being “anxious” to see her again.

Signing off one note as simply “Jack” it’s evident that Kennedy and Von Post shared a connection that went beyond simple attraction to one another. 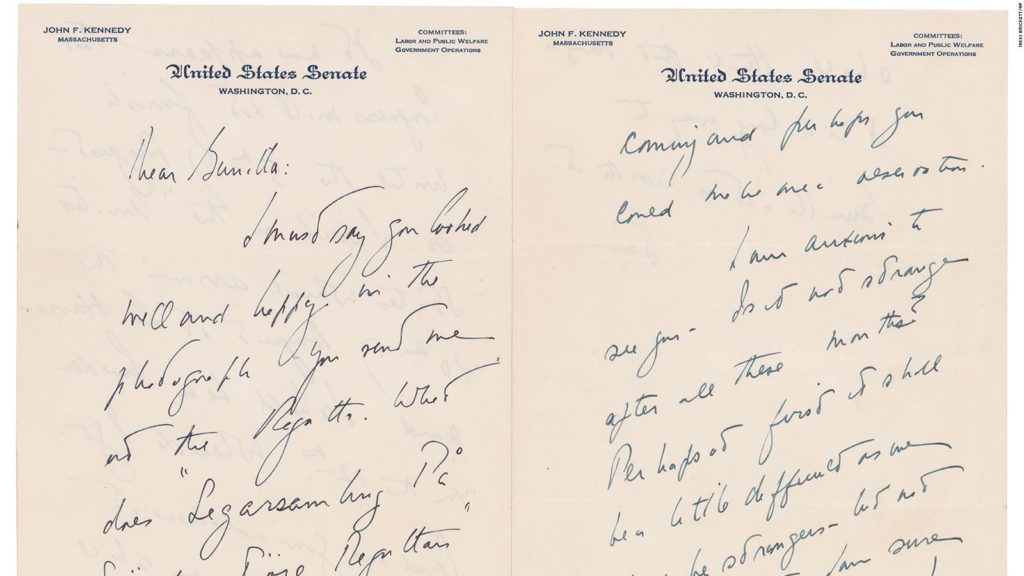 Indeed, according to RR Auction, JFK’s affections were so strong he wanted to “end his marriage and to bring her to the United States" only to find his efforts "thwarted by his father, his political ambitions, and Kennedy's and Von Post's mutual sensitivity to the miscarriage suffered by Jacqueline in 1955."

In a letter from February 1956, he wrote to his former lover to express dismay at the news of her nuptials.

"I must say I was sad to learn that, after all, you are not coming to the U.S. and you are marrying a farmer,” he said.

"I was planning to come back again [to Sweden] next summer to see you...& now what will happen. In any case let me know what you are going to do."

"If you don't marry come over (to America) as I should like to see you. I had a wonderful time last summer with you. It is a bright memory of my life -- you are wonderful and I miss you," he added.

The pair would reunite just once more, alongside their partners, at the 1958 Waldorf Astoria gala. By then Von Post was pregnant with the first of her two children.

They could not have known it at the time but it would be the last time they would meet.

Kennedy was assassinated in Dallas in 1963. By then Von Post was her widow, having lost her husband Ekman, who died while piloting a plane in 1960. She later moved to the US, settling in Florida where she married an IBM executive.