Taylor returned to her hometown of Bray, Co. Wicklow, yesterday to celebrate with her family, friends and fans, and to show off her newly won titles.

Thousands gathered to welcome home the undisputed champion of the world and Taylor described the fanfare and their support of her as “incredible”.

“The support I get in this town is incredible,” she said. 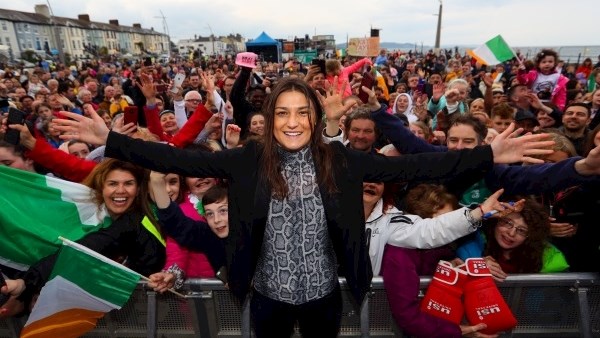 Katie Taylor during her Bray homecoming on Friday

There’s a feeling amongst the locals in Bray that Taylor should be officially honoured in some form for her momentous win, and some have been speaking about building a statue of the boxer and erecting it in the town centre.

But Bray Councillor Joe Behan says that while many like the idea of statue, Taylor and her family are apparently not so keen.

“I discussed it with [Katie’s mother] Bridget in the airport and I would say initially the reaction might be it’s not something [Katie] would necessarily want to have happen at this stage,” he said.

He went on to say that it was important that any honouring of Taylor should be agreed in consultation with Katie and her family.

Wow. A great champion, and charmingly modest. Build the damn statue, I say!

Behan added that while nothing was set in stone (pun very much intended, hold the applause), the town were keen to have something in place, at least, to honour their local hero.

“If there’s some appropriate artwork - whether it’s a statue, a mural or something else - that Katie would be happy with so that we would have a lasting reminder of her fantastic achievements at amateur and professional level.

“In due course, I’m sure we’ll be able to do something.”