The drugs had an estimated value of €1.4m (Image: An Garda Síochána)

GARDAí seized 200kgs of cocaine worth an estimated €1.4m at Dublin Port yesterday, with help from a four-legged friend.

A vehicle was stopped by investigators as part of an operation targeting those suspected of involvement in transnational organised crime.

A Customs Dog called Laddie then located the drugs in the vehicle's refrigerated unit.

Images released by gardaí appeared to show the drugs had been concealed in a shipment of watermelons.

A 22-year-old man has been arrested in relation to drug trafficking offences.

He is currently being detained at Blanchardstown Garda Station under Section 2 of the Criminal Justice (Drugs Trafficking) Act 1996. 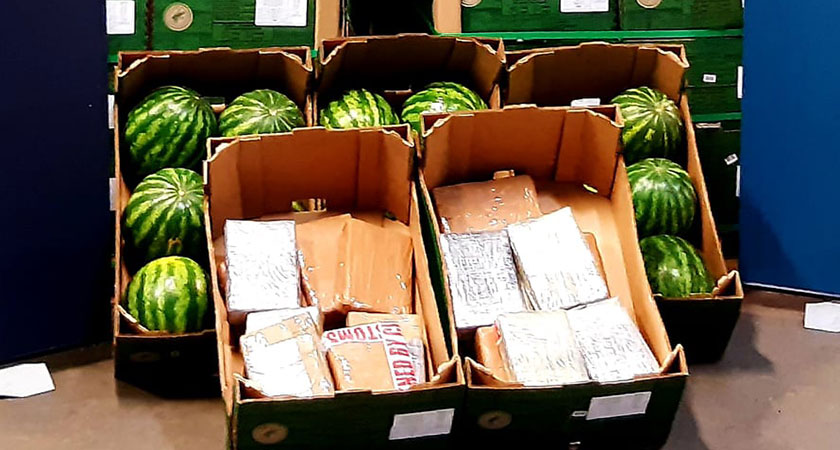 The drugs were hidden in the vehicle's refrigerated unit (Image: An Garda Síochána)

The find was part of a joint operation involving the Revenue Customs Service, the Garda National Drugs & Organised Crime Bureau and the Wicklow/Wexford garda divisions.

The huge find follows the discovery of 8.5kgs of cocaine and two litres of liquid cocaine at Dublin Airport on Thursday.

They were discovered when Revenue Officers searched the baggage of two passengers who had arrived on a flight from Lisbon, Portugal.

The man and woman, both aged in their 30s, were arrested and taken to Ballymun Garda Station where they were detained under Section 2 of the Criminal Justice (Drug Trafficking) Act 1996.