US RAPPER Azealia Banks has reignited her feud with Aer Lingus in a fresh tirade in which she branded the Irish airline “leprechaun ass b******.”

Banks hit the headlines back in 2019 after launching into an expletive-laden rant about her experience while travelling on an Aer Lingus flight from London to Dublin.

The American musician, who was due to perform at The Academy, clashed with staff on the flight and was eventually forced to get “off the plane.”

She later embarked on a fierce online tirade against the airline and the people of Ireland as a whole, asking one Irish critic: “Don't you have a famine to go die in?"

Banks has now revisited the feud in an Instagram story posted on June 9.

“Damn, I’ve made so many mistakes,” she said.

“So many things I regret.”

When it came to Aer Lingus, however, Banks had few regrets.

"Aer Lingus flight attendants are still the ugliest most ratchet, rude, racist and drunk hires in the entire Airline industry though," she said.

“I don’t take that back.

“I will gladly take the 8hour ferry from England to Ireland to avoid yall leprechaun ass b******.

“I got too much love for Dublin to have y’all ugly ass hoes stressing me out.

“And who thought it was good branding to call the airline ‘Aer Lingus.’

Aer Lingus is the anglicisation of the Irish aerloingeas, which translates as “air fleet.”

“Stay your black ass off that airline," Banks continues.

“No for real that airline is hella racist and drunk, they will instigate some bulls*** and try to get you tased in the airport.

“Them ugly b****** really tried to have me tased & sedated for not letting some old haggard white b**** wave her finger in my face. TUH."

Banks went on to jokingly suggest the name Aer Lingus sounded like the name of a sexual act or hygiene product.

“The Irish people do not deserve this," Banks she concluded. 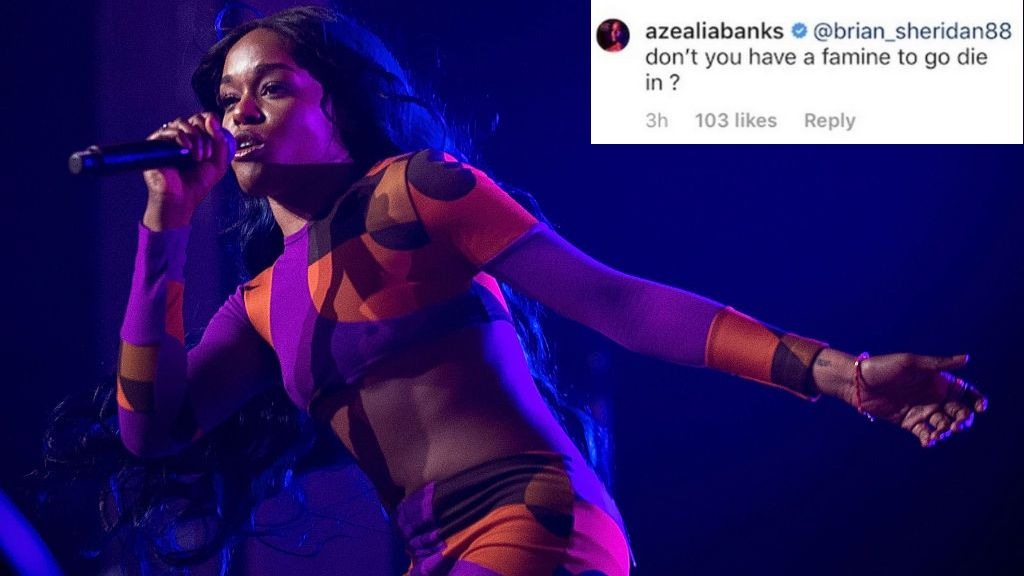 Back in January 2019, Banks took to Instagram Stories after removing herself from an Aer Lingus flight departing from Gatwick Airport in London.

"Every time I come to the UK, they always make some s**t with these airline people," Banks said in the video.

"They are always starting s**t with me. I had my bags deep in the plane and the lady was asking me some questions.

"I was trying to find my passport as I didn't have the answers and she was staring at me. I said. 'Don't stare at me'".

The rapper continued: "She goes to the Captain of the plane and lies that I said, 'Don't stare at me or I'll sort you out'. I'm from NYC, I don't use that slang.

"They crowded round me like I'm some sort of animal saying, 'we're going to have a problem'.

"I got off the plane. I've worked too hard in my life to be cornered by some ugly Irish b***h. They are ugly Irish women here.

"Then all these security n*****s come over treating me like a wild animal. They tried their hardest to get me to do something or freak out.

"I'll probably just drive to Dublin. Or get the ferry or whatever".

Aer Lingus responded in a statement issued after the incident: "Aer Lingus can confirm that two guests scheduled to fly on 10:55 GMT flight from London Gatwick to Dublin (EI233) this morning disembarked themselves prior to departure.

"The guests in question got off the plane safely of their own accord.

"Aer Lingus has a strict no-tolerance policy towards disruptive guest behavior. The safety and security of our guests and crew remains our first priority."

Banks continued to rant against Aer Lingus in the days that followed and even took aim at Irish women, branding them "Oompa Loompa looking spray tanned, crazy looking b*****s."

"The girls have scurvy, they're like vitamin deficient," Banks said on Instagram. "They need some calcium tablets and some Camaraderie soap."