LIAM MILLER, the former Irish international footballer, has passed away at the age of 36.

It was revealed last November that the midfielder was battling pancreatic cancer.

Tributes have poured in from former clubs, teammates and fellow players for the father-of-three, who passed away just days before his 37th birthday.

Former international teammate Steven Reid described Miller as a "top player and a great person", while Kevin Kilbane said he was proud to have shared a dressing room with him.

Former Celtic teammate Stiliyan Petrov, who himself battled leukaemia in 2012, said: "My thoughts and prayers are with his family and friends. RIP my friend."

Cork native Miller started his career at Celtic and was handed his debut late in the 1999/2000 season by acting manager Kenny Dalglish.

He flourished under Dalglish’s successor Martin O’Neill, making 40 appearances for the Glasgow club in his breakthrough season in 2003/2004.

He made the first of his 21 Ireland appearances that same season. 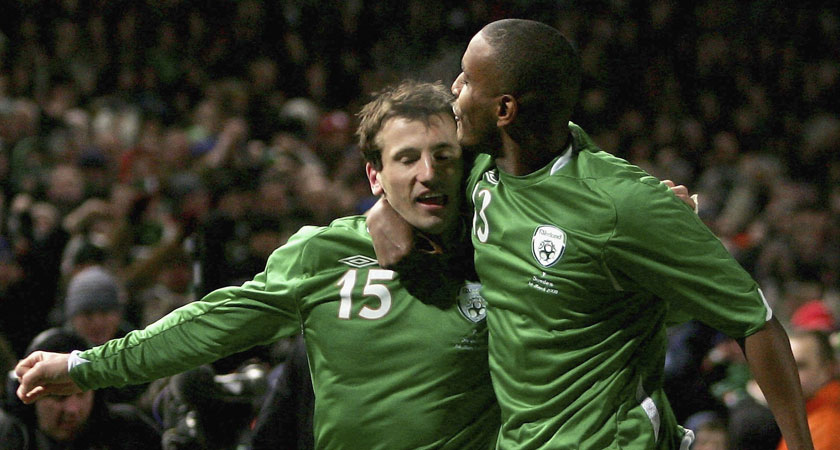 Miller celebrates his goal for Ireland against Sweden in 2006 with Clinton Morrison (Image: Getty)

His form earned him a move to Manchester United where he was tipped to be Roy Keane’s successor.

Although he failed to establish himself in the first team at Old Trafford, he enjoyed a productive spell in English football.

After a loan spell at Leeds, he moved to Sunderland where he won the Championship under manager Keane.

Following a stint at QPR, he returned north of the border where he impressed with Hibs.

He then spent three years in Australia with Perth Glory, Brisbane Roar and Melbourne City, before returning to his hometown team.

After helping Cork to second spot in the League of Ireland in 2015, he finished his career at Wilmington Hammerheads in the US.

Everyone at #CelticFC is deeply saddened to hear of the passing of former midfielder Liam Miller. Our thoughts and prayers are with his family and friends at this time.

We are incredibly saddened to hear of the passing of former Hibernian midfielder Liam Miller. Our thoughts are with his family and friends at this time. pic.twitter.com/XWURtc72M3

Terribly sad news about Liam Miller. Taken too young.Thoughts go out to his family.

Shocked to hear the passing of a young 36yr old Liam Miller.

Thoughts, prayers & condolences to all his family & friends. #RIP

Im deeply saddened to hear of the passing of my friend and old team mate Liam Miler😢my thoughts and prayers are with his family and friends. RIP my friend🙏🏼

Sad hearing the awful news that Liam Miller has passed away this evening, taken far so soon by a terrible disease. Proud to have shared a dressing room with him over the years. #RIPLiamMiller

RIP Liam Miller. Was lucky enough to room with Liam on a few international trips.. top player and a great person. Thoughts and prayers with his loved ones. 🙏🏽

Can’t believe my old team mate Liam miller @CelticFC has passed away today.. taken far too soon.. horrific news.. thoughts and prayers with his family at this time #RipLiam 🍀💚

Everyone at Leeds United are deeply saddened to hear of the passing of former #LUFC midfielder Liam Miller. Our thoughts are with his family and friends pic.twitter.com/4rtm5yOL1v