A PROTEST is planned to disrupt this year’s annual commemoration of the life of Oliver Cromwell at Westminster.

The commemoration is organised by the Cromwell Association and held every year on the anniversary of his death, 3rd September. It is held at the statue of Cromwell, overlooking Parliament square, on the invitation of the speaker of the House of Commons.

Oliver Cromwell, was an English military and political leader who served as the Lord Protector of England, Scotland and Ireland.

Liam Riordan from London Celtic Punks is organising the protest in order to remember the people killed during his conquests of Ireland.

The protest is about the UK denial about Cromwell’s campaign in Ireland.

“The reality is in 1641, Ireland's population was 1,466,000 and in 1652, 616,000. According to Sir William Petty (who served Cromwell in Ireland), 850,000 were wasted by the sword, plague, famine, hardship and banishment during the Confederation War 1641-1652. At the end of the war, vast numbers of Irish men, women and children were forcibly sold as slaves and transported to the American colonies by the English Cromwell government.”

“Justine Greening, secretary for education in a meeting with me last November point blank refused to discuss Cromwell in Ireland and defended him as a great military leader. The truth about Cromwell, his massacres, the decimation of the Irish population between 1641 and 1652 is well known around the world.”

Our protest on Saturday is intended to actively disrupt the Cromwell Commemoration and send a message that the Irish will object, protest and highlight that Cromwell stands accused of war crimes, religious persecution and ethnic cleansing on a dramatic scale. The correct historical legacy should prevail”, said Riordan. 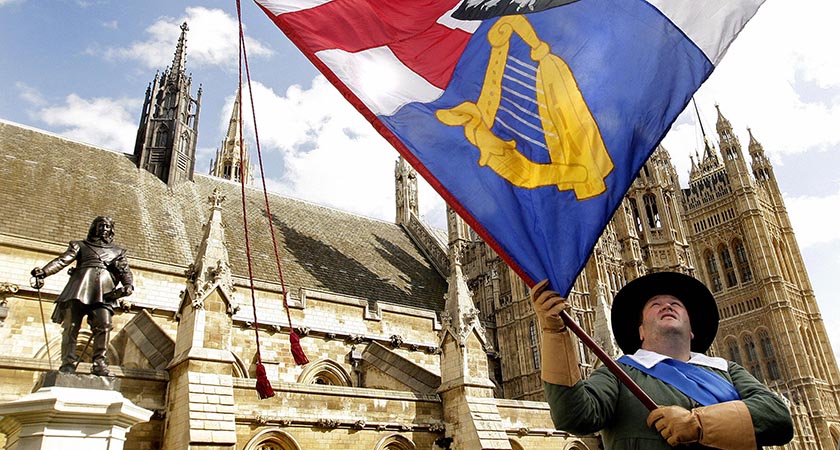 'Roundhead Soldiers' and members of the Cromwell Association gather outside The Houses of Parliament in London, (Photo credit should read SHAUN CURRY/AFP/Getty Images)

The Cromwell Association was formed in 1937. The association aims to educate the public “in both the life and legacy of Oliver Cromwell.”

John Goldsmith, chairman of the Cromwell Association said that “there is no agreed narrative amongst Anglo-Irish historians of what the exact course of events was in Drogheda in 1649, nor will there ever be.”

“As a historical society, the Association believes that the study of the events of the mid-17th century is both rewarding and fascinating. This includes parts of Cromwell’s career that are more controversial than others, including the events in Ireland in 1649.”

“The 2014 edition of our journal included papers presented at a conference we held on the subject which we hope will encourage further informed discussion. The debate over Cromwell and Ireland is a lively and vigorous one, but it should be one based on the balanced interpretation of evidence, not on the repetition of long standing prejudices.

The Association will continue to mark Cromwell’s death, in the way that it is doing so today, in the belief that his significance should not be overlooked now, or in the future”, he said. 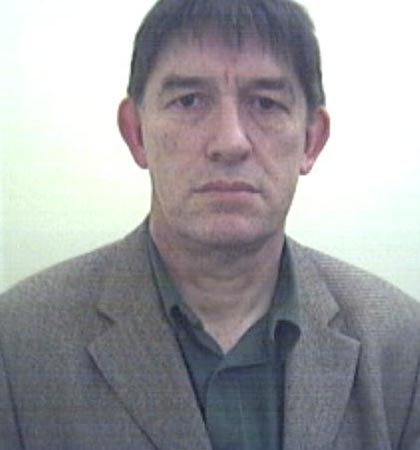 “One view depicts him as a fanatical Puritan killjoy. See for example the way he is portrayed by Tim Roth in the film To Kill a King. An alternative tradition hails him as the man who defended popular liberties against a tyrannical monarch. Modern historians would try to interpret him as a man of his time: fiercely committed to his cause, but also sharing in all the prejudices and preconceptions of his age.”

In regards to Ireland, Professor Connolly argues that there are two core issues.

He conducted a ruthless military campaign. In particular, he besieged and captured the towns of Drogheda and Wexford, in each case permitting the slaughter of the entire garrison as well as some civilians.” 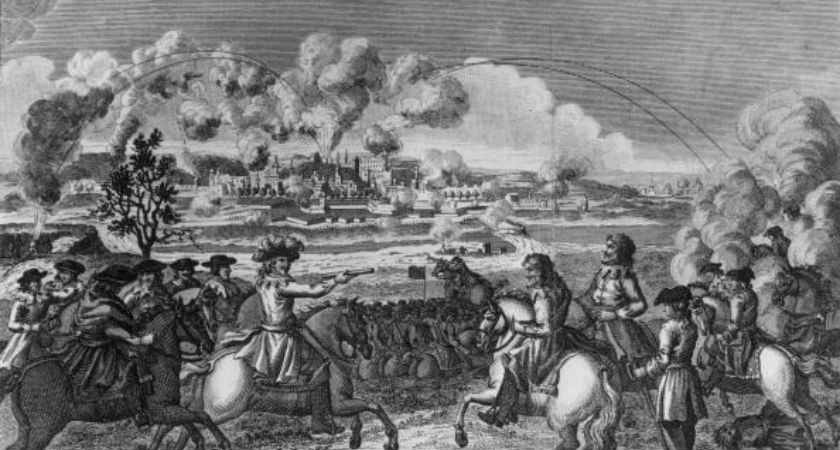 The storming of Drogheda in Ireland by Cromwell and his troops of the New English Republic, 11th September 1649. Many citizens were massacred and the garrison's officers shot which was against the code of warfare at the time. Original Artwork: Engraving by Barlow (Photo by Hulton Archive/Getty Images)

“After establishing military control over Ireland Cromwell's government (he was now back in England) planned a massive deportation scheme, under which the entire Catholic population would be moved to a few counties west of the river Shannon, leaving the rest of the Ireland free to be occupied by British settlers.

In the event the scheme was abandoned as unworkable. Instead it was only Catholic landowners and their immediate family and attendants who were sent to the west. But the plan represents the closest a British government came, at any time in the modern period, to treating Ireland like an overseas colony, and its population like natives to be corralled on a reservation.”

Professor Connolly says, “once again, as with England, the only sensible way to look at all this is in its contemporary context.”

“This was the mid-seventeenth century. Central Europe had just endured the appalling Thirty Years War (1618-48), when the population of some German states fell by as much as 50 per cent. And Cromwell was a man of his time. He insisted that he did not, in his words, 'meddle with any man's conscience.'"

"But committed Protestants like him believed that to tolerate Catholic religious practice was a violation of the first commandment, inviting divine punishment. He was also influenced by wildly exaggerated contemporary accounts of the massacre of Protestant settlers by Catholics at the beginning of the civil war, in 1641."