Lord of the Dance leads Mayo Day fun in Manchester

LORD of The Dance star James Keegan made a special trip home to Manchester over the weekend to join the Mayo Day celebrations at Chorlton Irish Club.

Now based in London, the Manchester-born dancer joined his mother Josephine and sister Louise – with whom he runs the successful Keegan Academy of Irish Dancing – to support the organisation’s Red and Green Family Fun Day, held on Sunday, May 3.

The event was one of a number taking place to celebrate Manchester’s Mayo connections over the weekend. 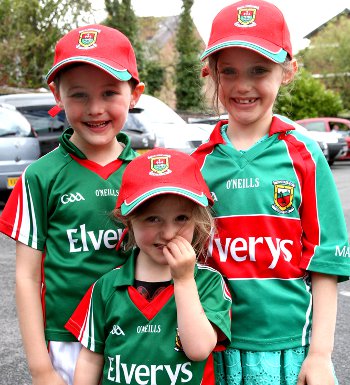 A Mayo Day concert was also held at St Mary’s Parish Hall in Levenshulme on Saturday night, featuring music from Mayo band Flatout and a range of local artists and dancers.

Manchester joined cities across the globe who took part in celebrating the inaugural annual Mayo Day, which officially fell on May 2.

Tony Hennigan, director of the Mayo Manchester Tourism and Business group, which coordinated events marking the historic event in the city, said: “We have been counting down the days since it was first announced just over twelve months ago that they were going to start an annual Mayo Day celebration.

"The whole of the Irish community in Manchester were looking forward to our Mayo Day weekend, not just those with Mayo roots,” he added, “while the reaction to the event around the globe has been unbelievable.”

Flagship Mayo Day celebrations were also held in Australia, New York, Toronto and Hong Kong over the weekend – while the Niagara Falls was turned green and red to mark the occasion.