This photo taken on May 18, 2020 shows Mao Yin (R) reuniting with his mother Li Jingzhi (C) and father Mao Zhenping (L) in Xian, in China's northern Shaanxi province. - A Chinese man who was kidnapped as a toddler 32 years ago has been reunited with his biological parents, after police used facial recognition technology to track him down. (Photo by STR / AFP) / China OUT (Photo by STR/AFP via Getty Images)

A MAN in China has been reunited with his parents 32 years after he was snatched from them as a toddler.

Mao Yin was just two years old when he was abducted while walking home from nursery with his father, Mao Zhenjing, back in 1988.

Mao Zhenjing last saw his son outside the entrance of a hotel in Xi'an they stopped at to get some water.

In the aftermath of his disappearance, Mao’s mother, Li Jingzhi quit her job to begin a three-decades-long search to find her son.

It was a crusade that saw Li become one of the most famous people in China, appearing on numerous TV shows and sending out over 100,000 flyers to try and find Mao.

Starting in the villages and counties around their home city of Xi’an, at one point Li headed to Sichuan after getting a tip about an abducted boy called Mao, though he ultimately ended up being a different missing child.

The campaign yielded results for other families too, with as many as 29 ending up reunited with their own missing children as a result of Li’s efforts.

Despite more than 30 years of searching, Li never gave up hope of finding Mao.

“Hope is what motivates me,” she told one interview earlier this year. “I believe that someday I will find my son.”

The breakthrough came in April when, according to state media, police received information about a boy from Xi’an who had been sold to a family some 600km (370 miles) away, for 6,000 yuan, three decades earlier.

Facial recognition technology was also used to assist in the search, with authorities creating a possible photofit of the adult Mao, using toddler photos, with the resulting image cross-checked against a national database.

Yet it was only through a DNA test that Mao Yin’s identity was confirmed.

Li was informed her son had been found earlier this month on May 10 – Mother's Day in China.

“This is the best gift I have ever got on Mother’s Day,” she declared. 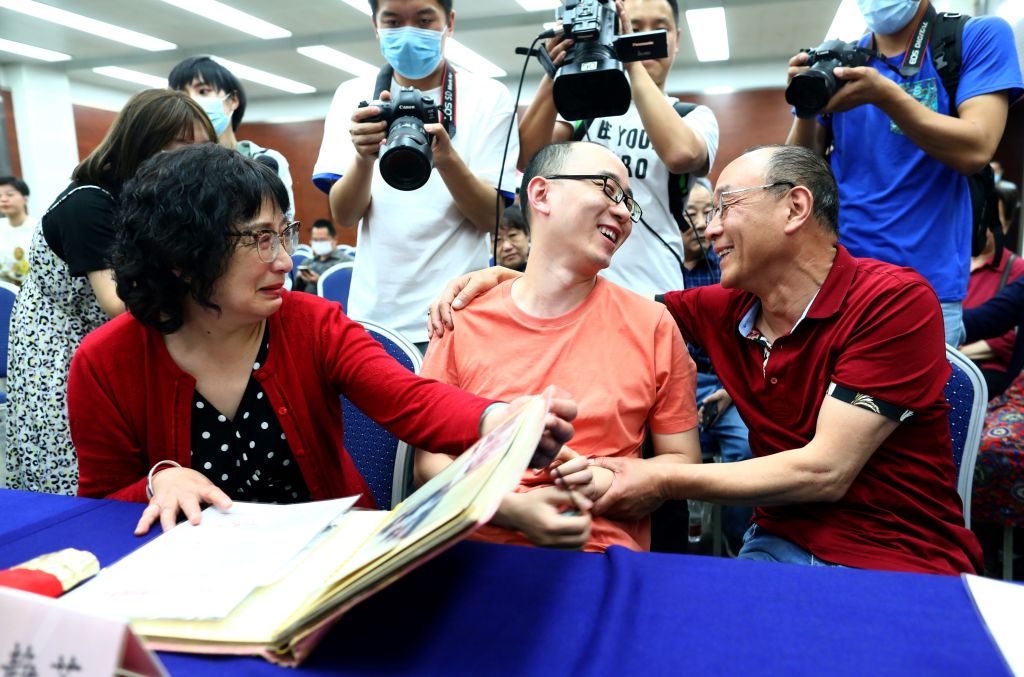 TOPSHOT - This photo taken on May 18, 2020 shows Mao Yin (C) speaking with his mother Li Jingzhi (L) and father Mao Zhenping (R) in Xian, in China's northern Shaanxi province. - A Chinese man who was kidnapped as a toddler 32 years ago has been reunited with his biological parents, after police used facial recognition technology to track him down. (Photo by STR / AFP) / China OUT (Photo by STR/AFP via Getty Images)

Police discovered the 32-year-old Mao, living under the name Gu Ningning, in the city of Mianyang, over in neighbouring  province of Sichuan, unaware he was the target of the high-profile search.

A week later, he was reunited with his parents in front of a large crowd and watching television cameras.

It was an emotional reunion for all involved with all three embracing in floods of tears while Mao’s father gently kissed his long-lost son on the forehead.

“I would like to thank the tens of thousands of people who helped us,” Li told Xinhua news agency.

“I can’t believe that after helping 29 missing children find their families, I am able to find my own son.”

Child kidnappings remain a serious problem in China, where minors have previously been snatched from parents for criminal and exploitation purposes as well as to cater to China’s market for adoptees with demand especially high for young boys due to China's one-child policy and the desire to have a male heir.