A MAN has been slashed in the face after two groups brawled in London ahead of this evening’s Millwall v Everton FA Cup tie.

The incident, branded ‘disgraceful’ by police, occurred just before 4.45pm outside Surrey Quays station on Hawkstone Road in Southwark.

The Twitter account of the Metropolitan Police said the large group of males was believed to be rival fans from Millwall and Everton.

Police are investigating after a large group of males, believed to be Millwall and Everton fans, began fighting in the street in #Southwark earlier today. Those with info that could assist police should call 101 ref 5117/26 Jan https://t.co/Xl9a3HzTZM pic.twitter.com/RmEY0JaIze

Footage shared online showed around 50 people clashing as police – including members of the Mounted Branch and Dog Support Unit – attempt to intervene.

The man who was slashed in the face was taken to a south London hospital with non life-threatening injuries. 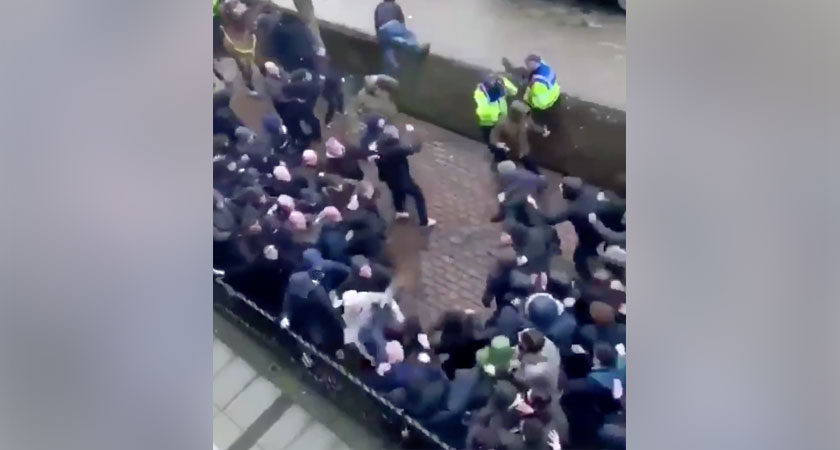 Images shared online purporting to be of the man show a person with a large slash running from the corner of his mouth to his eye.

Officers are yet to make any arrests and a crime scene remains in place.

Detective Inspector Darren Young of the South Central Command Unit said they are working to identify those involved.

“The behaviour of those involved in this incident is nothing short of disgraceful and those involved can be certain we will be working to identify them,” he said.

“We are aware of the video circulating online, which has quite rightly elicited shock and disgust.

“We are looking at it and urge anyone with information that could assist police to call 101 referring CAD 5117/26 Jan.”

Millwall won the tie 3-2 after an injury-time goal from Murray Wallace.