MARGARET THATCHER allegedly planned to create a five-mile 'no man's land' on the Irish border, according to a new book.

The plans were revealed by Michael Lillis, diplomatic adviser to former taoiseach Garret FitzGerald, who helped negotiate the Anglo-Irish Agreement, according to the Belfast Telegraph.

During an interview with Dr Graham Spencer, of the University of Portsmouth, who has written the book 'Inside Accounts' which looks into intricacies which lead to the Good Friday Agreement in 1998, and features Thatcher's supposed plans, Lillis describes the border plan as "a sort of crazy British proposal, although not a random one."

Allegedly, in 1984, there was a proposal made by Thatcher's government which involved the Garda and the Irish Army being able to cross the border to police Northern Ireland.

Lillis even claimed that the plans went as far as receiving official Cabinet approval.

The offer however was rejected by Dublin. 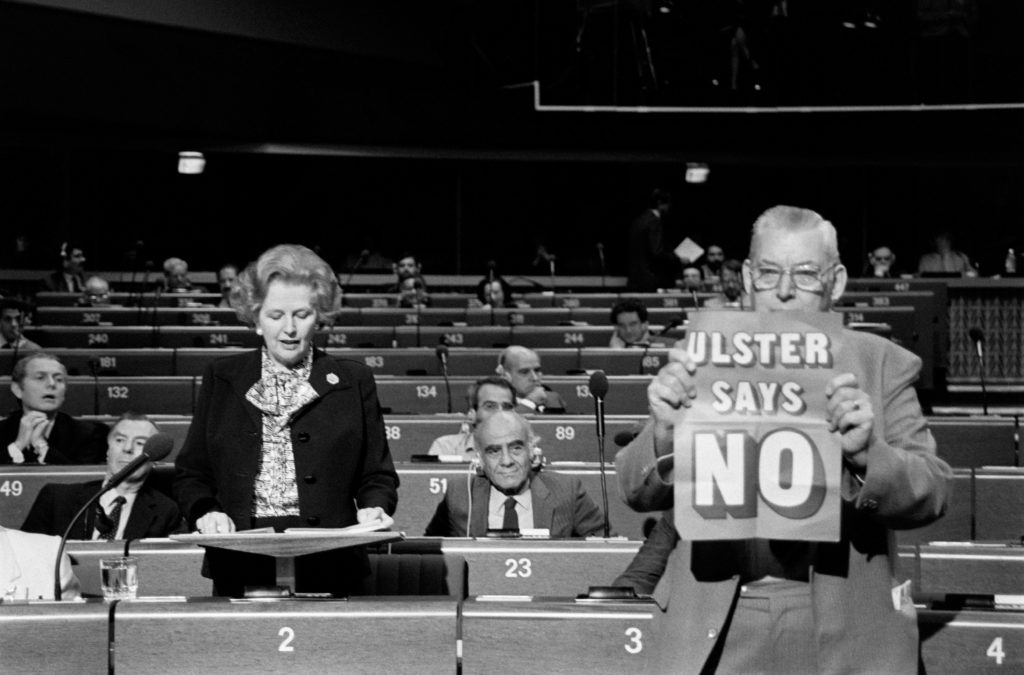 British Prime Minister Margaret Thatcher delivers a speech at the European Parliament, on December 09, 1986 in Strasbourg as the leader of the Democratic Unionist Party Reverend Ian Paisley (R) brandishes a placard saying "Ulster says no".

This is because while gardai and the Irish Army were universally popular with the Irish public, the same couldn't be said of the security forces across the border.

"For virtually one half of the population, the army is regarded as an occupying force, while for the other half it's regarded as 'our army' and, while the RUC was seen as 'our police force' for unionists, for nationalists it was an oppressive, foreign police force," Mr Lillis said.

"Because of that, the idea of having those people on our side of the border, when they were regarded as oppressors of nationalists in the north, was unthinkable.

"Even so, Armstrong and Goodall came over to the taoiseach's department and they made this proposal in writing.

"It wasn't just Mrs Thatcher and it wasn't just the foreign secretary; it was a Cabinet-approved proposal, as well."

He added that he thought the plans were "remarkable" given the friction on both sides and the disdain the Irish people would have for the likes of the Royal Ulster Constabulary (RUC) coming across and imposing their authority.

"If you consider the Cabinet saying to these foreigners, 'Come in to our territory and help us to solve this chaotic situation', well that was a big deal. I'm sorry our side didn't see it in those terms and negotiate on from there," he added.

The Good Friday Agreement was signed 22 years ago today