MARK WAHLBERG has revealed his gruelling daily routine which starts at 2:30am sharp and includes two gym sessions, a spot of golf and a morning prayer.

The 47-year-old actor has a reputation as one of the fittest stars in Hollywood, which dates back to his days as a rapper in the early 90s.

And ahead of the release of his new action thriller, Mile 22, Wahlberg took to Instagram to share the intense schedule that has helped him reach the peak of physical fitness.

It starts promptly at 2:30am, when Wahlberg gets up, beginning his day with a morning prayer.

A devout Catholic, the Boogie Nights actor has breakfast at 3:15am before moving on to his first workout session of the day - a demanding 95-minute session designed to get the blood pumping.

At 5:30am he enjoys another, post-work, meal before enjoying a shower and a spot of golf at 7:30.

Another snack follows at 8am before Wahlberg enjoys a cryo-chamber recovery session at 9:30am that helps his body recover quicker from the morning's activities. 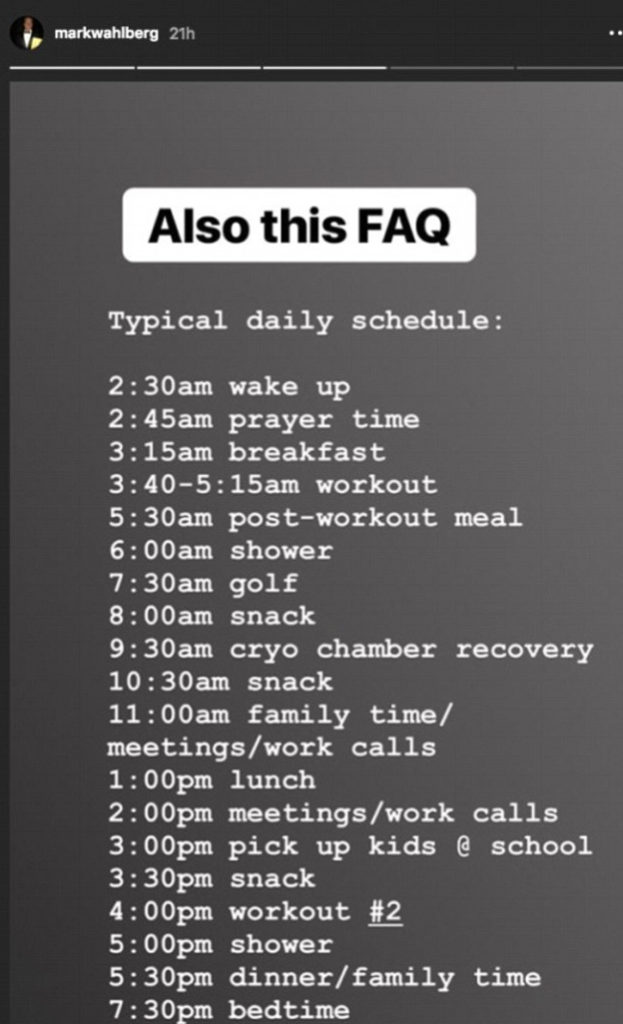 His morning then continues with another snack before 11am when Wahlberg gives himself two hours to complete work calls and spend time with his family.

Wahlberg's second gym session lasts an hour and then it's on to another shower and more family time and dinner before bed at 7:30pm on the dot.

As demanding a schedule as you are likely to find in Hollywood, it's a testament to the dedication and focus that has helped the actor become one of the biggest names in the business.

It also sounds thoroughly exhausting. But, as the saying goes "no pain, no gain".

22 Mile is in cinemas from September 19th.