CYCLISTS in Co. Mayo have been issued with number plates for their bicycles as part of a new initiative to improve safety on two wheels.

Hundreds of the brightly-coloured plates will be distributed throughout the county next week to coincide with National Bike Week Ireland 2019 from June 22 to 30.

The move comes after a recent report by the European Transport Safety Council found that pedestrians, cyclists and motorcyclists account for around 70% of road deaths in European cities.

"The purpose of the number plates is to raise awareness around cycle safety and encourage more people to take to the two-wheel mode of transport rather than the four wheels," he said. 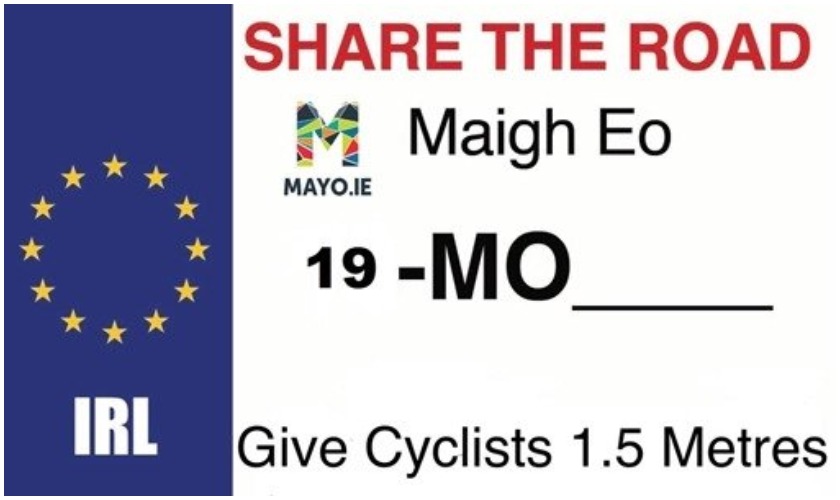 "We also want to get the young and not-so-young cyclist to remember that they have a responsibility for their own safety when using a bicycle and motorists to understand the space cyclists need on the road.

"The bright-coloured number plates will have a number and safety message on them and will hang under the bicycle saddle in a bid to increase the chances of other road users seeing the cyclist."

The scheme is part of a number of events planned in Mayo for National Bike Week.

Cycling is growing in popularity in Ireland as in many parts of the world, which also means accidents involving bicycles are becoming more common.

Figures released last year showed that an average of four cyclists are hospitalised in Ireland every day due to being injured in "transport accidents".

In 2017, a total of 15 pedal cyclists lost their lives on Irish roads - an increase of five on the previous year, according to the Road Safety Authority (RSA).

Dublin, Cork and Mayo had the highest number of fatalities, with Sunday and Monday afternoons the most common for road accidents.

Dublin to get €120m for cycling and walking infrastructure

Fearless cyclists embark on epic trip from London to Roscommon