A MEMORIAL football tournament in memory of Ireland and Celtic fan Sean McKenna will take place this weekend in his Scottish hometown.

Sean, 24, went missing in the early hours of October 10 last year after leaving a friend’s house in Coatbridge, a town near to Glasgow.

Sean was a huge Celtic fan and regularly attended games at Celtic Park with his dad James.

He loved football and often played at McKenna Park – home to local team St Anthony’s FC and named after his grandfather who chaired the club.

McKenna Park will host a memorial football tournament in honour of Sean this Saturday with the proceeds going to Missing People Scotland – a charity which helps the families of people who disappear.

Eight teams will take part in the tournament with players mixed into random teams to keep things fair.

Those attending are also asked to donate £10 to the cause. 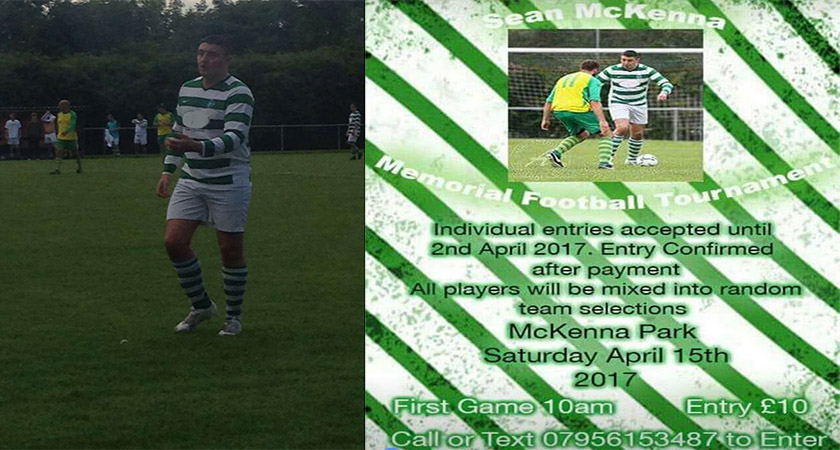 Proceeds from the tournament will go to Missing People Scotland. Picture: James McKenna

“We want to raise money for the families of missing people up here because when your child or family member goes missing, money becomes a struggle.

“It’s difficult to work when someone you love has disappeared and if Sean’s tournament can help people get by then we’ll be very happy.”

Scottish politician Tommy Sheridan will be among the players turning out on Saturday in memory of Sean.

The tournament was arranged to coincide with what would have been Sean’s birthday on April 26.

“It was hard enough when Sean went missing for 17 days but at least we knew Sean wasn’t coming home because he took too long to walk home along the Loch,” Mr McKenna said.

“Not having closure is the most horrible pain ever and a lot of families have had people missing for five, 10, 20 years and I can’t imagine the pain they’re in.

“When your child is missing you have no sleep, you’re driving about everywhere looking for them and you’re exhausted half hoping that bad news isn’t going to come.”

A women’s match will also take place at the tournament – which kicks off at 10am on April 15 at McKenna Park in Govan.

It will be a family affair for Sean’s sister Karen as she lines out against a team featuring one of her aunts.

“It’s quite funny,” James said. “I’ve had to take them training because my daughter’s never kicked a ball in her life.”