Memorial to victims of Ireland's Great Famine is unveiled in Glasgow

A MEMORIAL to victims of Ireland’s Great Famine has been unveiled in Glasgow during a dedication ceremony.

The memorial also recognises the trials faced by Irish emigrants upon arriving in Glasgow and the role they and their descendants played in shaping the city.

The installation is also a memorial to the victims of the Highland Famine of the mid-1800s and features plants and stone native to Ireland and the Highlands.

A path features flagging bearing the names of places people left in Ireland to immigrate to Scotland.

At its centrepiece is a replica of an upturned boat bearing the message: “O, my native land, you are on my mind.”

“The treatment of those who arrived on ships from Derry and Donegal and by foot or by cart from the Highlands was not always hospitable,” said Councillor McDonald.

“However, 170 years on, we are privileged to be able to say Glasgow remains home to one of the world’s great Irish diaspora – and a city proud to be home to more Scots Gaelic speakers than anywhere else in the country.” 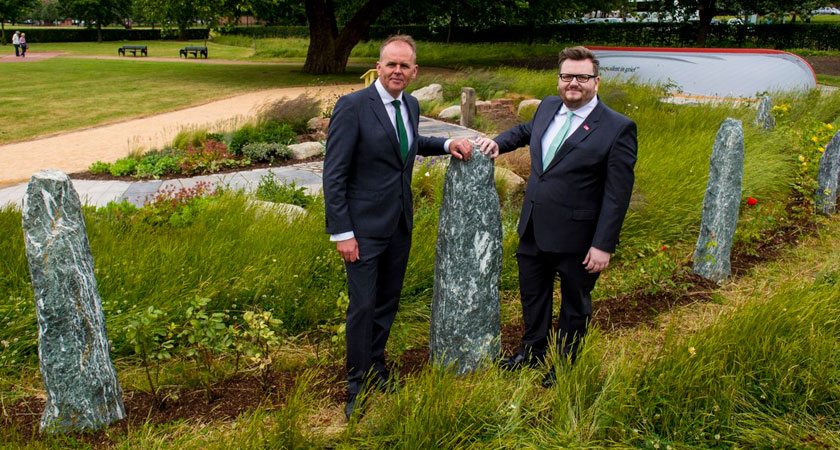 Around 1million people died as a result of the Great Famine while 2million more were forced to emigrate – 100,000 are thought to have headed for Glasgow.

Deputy McHugh, Minister for Irish language, Gaeltacht and the Islands, said: “A large number of those who were forced to leave Ireland came to Glasgow and to the west of Scotland.

“It is fitting, therefore, that as we commemorate the historic tragedy of the Famine, we recall and acknowledge the enormous impact that Irish Famine migrants had on Scotland and the positive contribution they and their descendants have made over many decades in shaping the modern city of Glasgow.

“That recognition is important and I welcome the initiative taken by Glasgow City Council in developing this memorial."

Professor Devine meanwhile said the memorial sent a message to today's generation that immigration can ultimately have a positive impact on a host society.

He added: “Fittingly, this is an overtly inclusive memorial which recognises the sufferings of both Catholic and Protestant Irish victims of the catastrophe as well as that of Highland Gaels.”