NO REPRO FEE 15/12/2016. Robert Maharry, Ruary O Siochain and Richard Gorman look at the chest they found almost 40yrs ago discovered in a skip on Fitzwilliam Square by the three friends out walking. How they came across the chest is noticed a pristine copy of a newspaper which had blown on to the ground on inspection they discovered it dated November 12th, 1921. What was in the chest was documents they came across bearing the name of Capt Edward Michael Conolly of the Royal Artillery and the address "Castletown". Papers in the box appeared to relate to land deals associated with Castletown, in Celbridge, and Leixlip Castle, also in Co Kildare, and other estates, but the men did not immediately investigate the contents fully. The chest remained in Mr Maharry garage in Dalkey, Co Dublin until last year, Artist Richard Gorman Last year was looking for a locations for a photo shoot and came across Castletown and made contact with Mary Heffernan of the Office of Public Works. After the photo shoot Mr Gorman got permission for a exhibition of his works there. Noticing the unusual spelling of the family name Conolly, Gorman recounted the tale of the chest to Ms Heffernan. The boxes were taken to the OPW this year and the officals were was astonished by the find. They are pictured in Dublin Castle at the formal handover to the State of the historic Castletown House Documentation. After conservation, the OPW will house the collection in Castletown where select documents will be available for public viewing. Photo: Leon Farrell/Photocall Ireland.

A TREASURE trove of historical documents, including four royal seals, has been donated to the Irish state having been discovered in a skip over 40 years ago.

Minister of State with responsibility for the Office of Public Works, Seán Canney accepted the donation yesterday at Casteltown House in Co. Kildare and thanked the three men who had found and saved them over decades ago.

“I would like to thank Richard Gorman, Robert Maharry and Ruary Ó’Síocháin for their very generous donation to the State," the Minister said. “The papers will be conserved and returned to their home in Castletown House adding to our knowledge of that wonderful place.”

Almost 40 years ago, the three men stumbled upon the treasure trove containing 165 documents with royal seals in a Dublin skip.

Among boxes of documents found by the trio - Robert Maharry, Richard Gorman and Ruary O'Síocháin - was a metal chest displaying the name of Capt. Edward Michael Conolly with the address as Castletown.

Inside was a collection of maps, grants, seals and royal letters including the royal seals of Elizabeth I, Kings George I, James I and Charles I.

The documents had been stored in an attic for the past four decades before a string of coincidences over the past two led to their rediscovery.

Mr Gorman, now a recognised artist, had been looking for locations for a Hermes photoshoot where his paintings were being used as a backdrop.

He went on to contact Mary Heffernan, general manager in Castletown House, and soon the penny dropped when he saw the familiar but unusual spelling of the surname Conolly at the house - just as it had ben on the metal chest from all those years ago.

He called Mr Maharry and Mr O’ Síocháin to relocate their find and in December 2015 it was brought to Dublin Castle and given over to the charge of National Historic Properties. 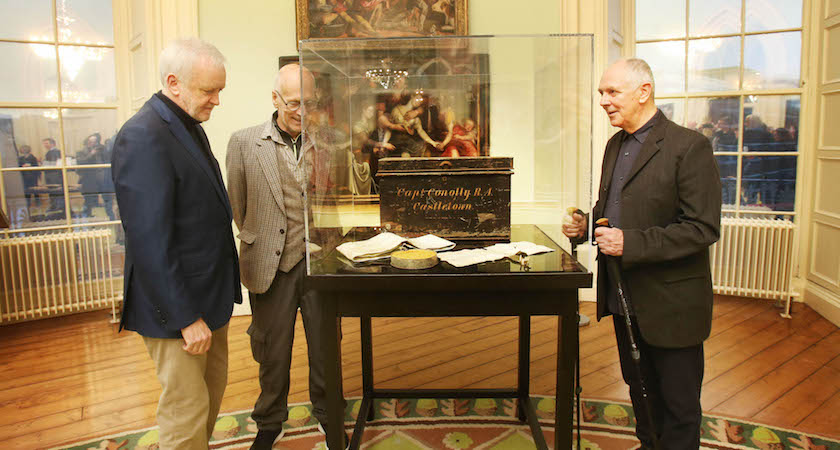 Dr Myles Campbell of the Office of Public Works began cataloguing the papers in January of this year.

“The first inkling of its true significance came when a large wax seal tumbled out amid the papers. It quickly became apparent that it was a royal seal," he said.

“Undoubtedly the most memorable of these was when a grant of lands bearing the seal of Queen Elizabeth I emerged close to the bottom of the chest.

"It was dated 1578 and was in very good condition for a document of its age.”

Once all the contents, some dating back to the 16th century, were examined it was clear the find was in fact an archive documenting the history of Castletown House.

The house was built by William Conolly, a former speaker of the Irish House of Commons and said to be the wealthiest man in Ireland at the time.

Dr Campbell added: “I’m hopeful that through looking carefully at the papers in this collection, which include several versions of William Conolly's will, we should be able to form an even better understanding of his route to success and of the fortunes of those who came after him in the eighteenth, nineteenth and twentieth centuries.”