BELFAST, NORTHERN IRELAND - OCTOBER 28: The Northern Ireland Secretary of State Chris Heaton-Harris has extended the deadline by which an executive in Northern Ireland must be formed. (Photo by Charles McQuillan/Getty Images)

The new deadlines to form an election to be called are now 8 December with the potential for an extension to 19 January if necessary.

If an executive is not formed by those dates, an election will need to be held by either 2 March or six weeks later on 13 April.

Speaking in Westminster today to announce the change, Chris Heaton Harris said Northern Ireland is best governed when governed locally, but that this has not been possible since the last election in May.

"I and this Government believe strongly that people in Northern Ireland deserve a functioning Assembly and Executive, where locally elected representatives can address issues that matter most to the people that elect them," he said.

"However, for six months the Parties have not come together and, on 28 October, the deadline to form an Executive, set down in law passed. That was the Northern Ireland Ministers, Elections and Petitions of Concern Act 2022. This is hugely disappointing.

“What people would welcome is having their devolved institutions up and running - because they are worried when they see a massive £660m black hole in this year’s public finances at the same time as their public services are deteriorating.

"They are worried that almost 187,000 people in Northern Ireland have been waiting for over a year for their first outpatient appointment.

"And they are worried that there is a higher share of working age adults in Northern Ireland with no formal qualifications than anywhere else in the United Kingdom."

Mr Heaton-Harris said the legislation will allow Northern Ireland's departments to support public services, and that extra powers are to be given to Stormont civil servants to enable them to run public services.

The move will require legislation to be passed at Westminster.

Mr Heaton-Harris added that the UK will not consider a joint authority government in Northern Ireland.

Mr Heaton-Harris has said he will introduce legislation to "provide a short straightforward extension to the period for executive formation".

“People across Northern Ireland are frustrated that their Members of the Legislative Assembly continue to draw a full salary whilst not performing all of the duties they were elected to do," he said. "I will thus be asking for this House’s support to enable me to reduce MLAs’ salaries appropriately." 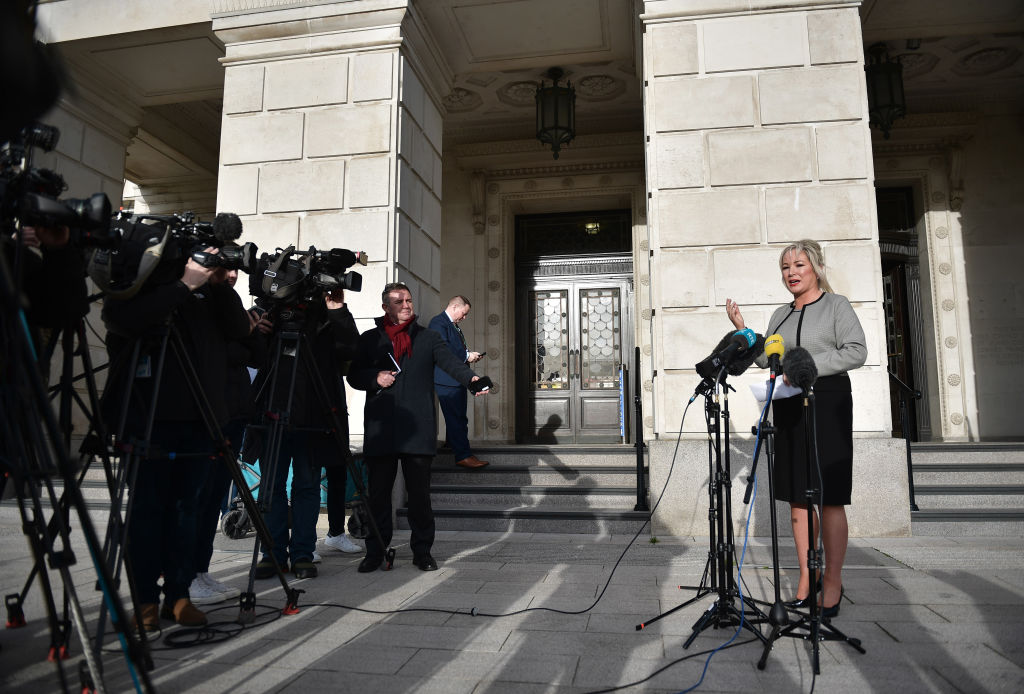 BELFAST, NORTHERN IRELAND - NOVEMBER 09: Sinn Fein northern leader and First minister designate Michelle O'Neill holds a press conference on the steps of Stormont on November 9, 2022 in Belfast, Northern Ireland. Earlier today, the UK Northern Ireland Minister Chris Heaton-Harris announced an extended deadline for the main parties here to form a power-sharing government, before a new assembly election is triggered. The new deadline is 8 December but can be further extended, meaning an election can be held as late as 13 April 2023. (Photo by Charles McQuillan/Getty Images)

Assembly members currently get a basic salary of £51,000 (€58,119), and the expectation is that that this will be cut by around a third with plans to have the reduction in place in time for Christmas.

It is hoped that the reduction will entice those causing the current impasse to re-enter negotiations, particularly the DUP who are refusing to return to power-sharing until their issues with the Northern Ireland Protocol are addressed.

DUP South Belfast MLA Edwin Poots said the Secretary of State is free to take whatever action he sees fit but the NIO must recognise that until the Protocol is replaced with arrangements that unionists can support there will be no basis to restore devolution.

“Our opposition to the Protocol is not dependent on salaries," he said. "The sooner the Government deals with the Protocol, the sooner Stormont can be restored.

"The Protocol is not acceptable to unionists and until it is replaced with arrangements that unionists can support, there will be no basis for progress.

"It is a matter for the Secretary of State if he wishes to call an election and what legislation he wishes to introduce. We are ready to renew and strengthen our mandate. Elections are the bedrock of democracy and unlike others we will readily take our case to the electorate."

Social Democratic and Labour Party Leader Colum Eastwood MP has said everyone’s focus must be on restoring the Stormont institutions to deal with the challenges facing people in the North.

"With the Secretary of State having pushed the idea of an election and the prospect of a deal between the British government and the EU on the Protocol getting closer every day, the DUP has no excuse for continuing their boycott of the Stormont institutions. They have no justifiable reason for hanging about while people’s homes get colder and their cupboards get emptier.

“I welcome the move to cut MLAs pay, let me be clear – SDLP MLAs want to be at Stormont every day working to deal with the huge number of issues impacting people in our communities, but while they are prevented from doing a key part of their jobs and so many families here are struggling, we understand the frustration the public is feeling.

“The DUP are rapidly running out of road, they have said they will return to the institutions when a Protocol deal is reached and it’s time they respected the democratic decision of the electorate in May and got back to work.”