As London prepares to host an LGBT group in its St Patrick’s Day march for the first time this weekend, one of the people behind the event said her counterparts in New York had no right to exclude such people.

Catherina Casey, chair of the Mayor of London’s St Patrick’s Advisory Forum, said celebrations of Ireland’s patron saint must give “everyone” the chance to celebrate their heritage.

“But obviously, within the organisational levels at St Patrick’s in New York, that progression of thinking has not taken place,” she told The Irish Post.

The city’s mayor and a number of other public officials have announced they will boycott the event over the controversial rule.

Planners say gay people are welcome on the procession, but they are forbidden from identifying themselves by their sexual orientation.

Ms Casey said such an approach was at odds with the views of 21st century Irish society.

Ms Casey also said such a situation would never be allowed to arise in London.

“We would not be allowed to get away with that (banning gay pride signs),” she explained.

“We need to show that we are in tune with contemporary society, so for us it would not be a question, as that is part of our society. People would completely object and rightly so if we were so limiting.” 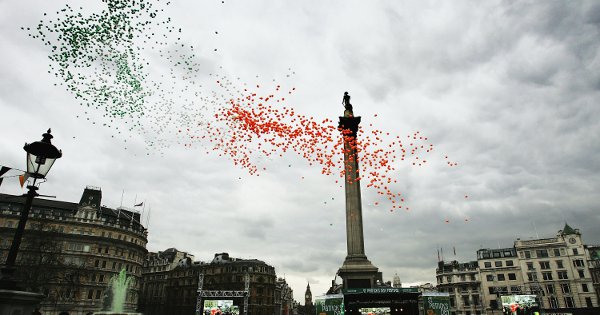 Her comments come as the Taoiseach confirmed he will attend the New York parade despite coming under fire in the Dáil for his decision to do so.

His cabinet colleague Joan Butron is expected to turn down her invitation to the march over its exclusion of gay people.

But Mr Kenny defended his decision to take part during his annual Britain visit this week, stating that the event is “about our Irishness, not about sexuality”.

“You make your point by turning up not by walking away,” he told The Irish Post.

“Half a million people march on St Patrick’s Day in New York. I do not know the sexuality of the people who are there. That is a matter for themselves. This is about an expression of our Irishness.”

Cecily Maher, who will lead the London-Irish LGBT group under a rainbow banner in the English capital’s parade this weekend, said she was “disappointed” by Mr Kenny’s decision.

Ms Maher warned that by attending the Taoiseach risks making vast swathes of Irish people feel isolated by their government.

“The majority of Irish people support gay rights, so he would also not be reflecting them if he takes part,” she added.

Ms Maher also dismissed the Taoiseach’s attempt to dismiss criticism of his attendance by citing his support for a referendum on gay marriage.

“Those are two different issues,” she said.

“So while we welcome his support for referendum, we would also expect his support for the LGBT community having the freedom to walk in a parade that represents Irishness and what it is to be Irish.

“For some Irish people that is about being LGBT and that is as much a part of them as being an Irish dancer or in a sports club.”

Given that he will be attending the event, Ms Maher said Mr Kenny should wear a rainbow pin on the day and raise the issue with the parade’s organisers.

Her comments were backed up by Ms Casey, who called on the Taoiseach to make a statement during his time in New York opposing the exclusion of any section of Irish society from St Patrick’s Day celebrations.