SINN FÉIN leader Mary Lou McDonald has told British TV that she believes there will be referenda on Irish unity in this decade.

Speaking on ITV's Good Morning Britain this morning ahead of meetings with political leaders in London, she said she believes preparations for such changes need to be made now, as there will be "no prize for anybody burying their head in the sand."

"Bear in mind that when the Northern Irish state was created more than a century ago it was deliberately engineered to ensure that it would have a forever unionist majority and that is now gone," McDonald said.

"I also believe that we shouldn't come at this with a sense of dread or fear or loss; we need to look at this as an incredible democratic opportunity. Partition has been disastrous for Ireland and disastrous for Britain as well. We've had division, we've had conflict, but we've also had nearly a quarter of a century of a very robust peace process and the time is now looming where we bring this journey to its conclusion. An end of partition and a reunified Ireland in peace and security, and with a good neighbourly and strong relationship with Britain."

'How long before we have a united Ireland?' - @richardm56

Leader of Sinn Féin @MaryLouMcDonald tells Richard and @susannareid100 that she believes there will be 'referendums on unity in this decade.'

She adds that we need to look at this as a 'democratic opportunity.' pic.twitter.com/qikATyhgw5

She recognised the large Irish community located in Britain, and that such a community sets a basis for a "strong, peaceful, orderly relationship."

In the Northern Ireland elections in early May, the DUP received 25 seats while the UUP received 9 in comparison to Sinn Féin's 27.

The SDLP received 8 seats and the Alliance Party received 17.

When challenged on the fact that combined unionist votes across the DUP and UUP received more votes that Sinn Féin, McDonald replied:

"Sinn Féin is not the only non-unionist party, you have the SDLP and the Alliance Party, and in fact the unionist electoral majority has been gone in the last number of elections in the North of Ireland.

"What makes the most recent election so exceptional is that Sinn Féin emerges as the largest party, and for the first time a republican, nationalist - Michelle O'Neill - emerges as the First Minister-elect."

She was also asked to formulate a possible question which could be put to voters in the event of an Irish unity referendum.

"The question will essentially be to end partition, to end the union, to reunify Ireland, whatever way that question is formulated," she said.

"Ireland has changed enormously. It is now a modern, vibrant outward looking society. The north, because of the Protocol, has access to the European market - no other part of Britain has that. The economy, despite some of the myths that are pedalled in this country, is good in the north and all-Ireland trade is in good shape.

"What we need, and why I am in London today is to appeal, particularly to political leaders, to act in good faith and to be reasonable and fair when it comes to Ireland."

She said Boris Johnson needs to "stop playing games with a very rejectionist strand of unionism" to allow the formation of a government in Northern Ireland to proceed. 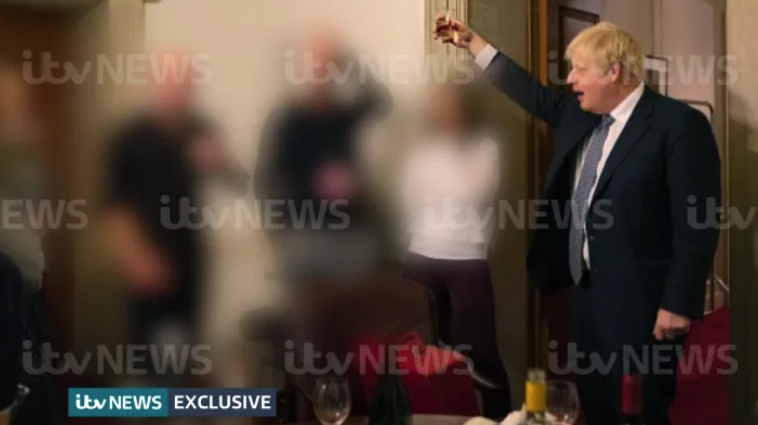 McDonald was also asked her opinion on photos which emerged yesterday which show the Prime Minister toasting at an event he previously claimed he did not know was a party.

"It seems to me if you are holding a glass to make a toast you are at a party," McDonald said.

"But I know these pictures and that story is a matter of great controversy. I also understand that because it was so hard during lockdown, any sense that there is one rule for some and another for others is hugely problematic. I will diplomatically just say that and leave the rest to the British public to make up their own mind."