THE 'Fighting Irish' leprechaun mascot used by the University of Notre Dame has been voted one of the most 'offensive' mascots in American collegiate sports.

A recent survey conducted by Quality Logo Products found that the leprechaun was the fourth most offensive mascot in the US, behind three which depict Native American characters.

Officials from the university, which has predominantly Catholic ties, defended the logo, arguing that it is a "celebration of genuine Irish heritage," rather than anything more sinister.

They insisted that they regard their mascot with "respect, loyalty and affection," adding that they chose the symbol to emphasise the resilience of the Irish people.

"In both upraised fists of the leprechaun mascot and the use of the word 'fighting', the intent is to recognise the determination of the Irish people and, symbolically, the university's athletes," the school added.

The Fighting Irish became Notre Dame's official nickname in 1927 thanks to then-president Fr Matthew Walsh, who was of Irish descent.

Initially, it was used as a derogatory term by rival fans, as many of Notre Dame's athletes were Irish at the start of the 20th century, but Fr Walsh decided to change the association and meshed it into the team, and the university's identity. 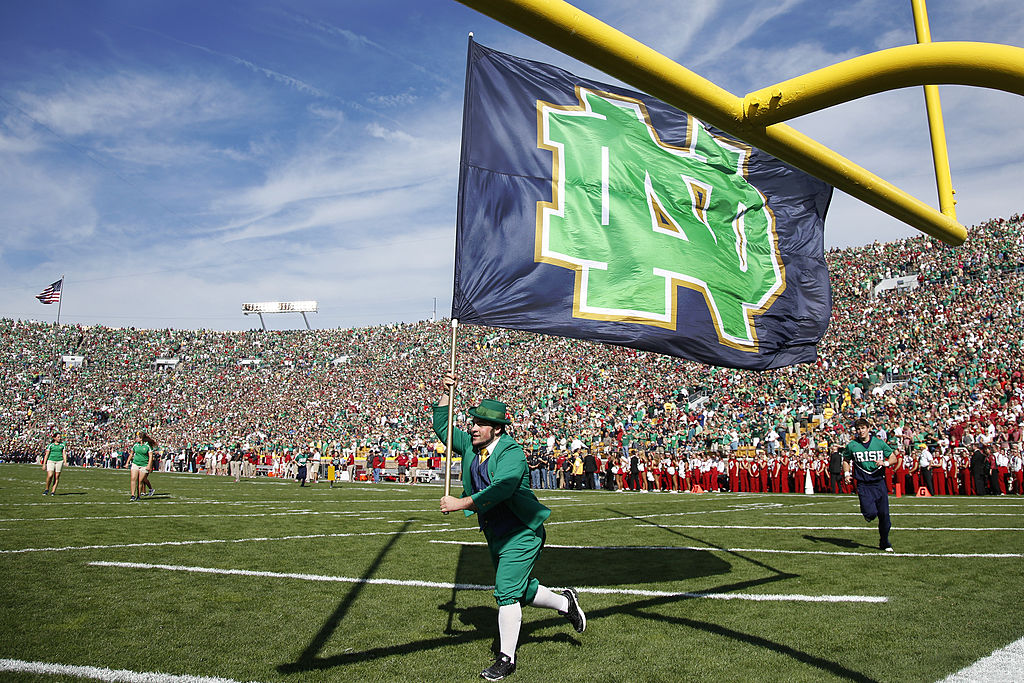 Last year, Notre Dame came under pressure to retire its century-old mascot, especially in the wake of a number of sports franchises caving to public outrage and changing their Native-American-based names and logos.

In April, the Cleveland Indians announced that their baseball team would be known as the Guardians, while Washington's NFL team famously distanced itself from the 'Redskins' moniker in 2014, and officially dropped the title last year.

"It is worth noting... that there is no comparison between Notre Dame's nickname and mascot and the Indian and warrior names (and) mascots used by other institutions such as the NFL team formerly known as the Redskins," Notre Dame representatives said.

The Fighting Irish are one of the most successful college programs, not just in football, winning a total of 22 national titles in all sports. It last won the college football national championships in 1988 under coach by Lou Holtz.