Who was he? Oldest known photograph of Irish Famine survivor from 1853 revealed in new exhibit

AN incredibly rare photograph showing a survivor of Ireland’s Great Famine just a year after it came to an end is to go on public display for the first time.

The Irish Potato Famine Exhibit will run in Dublin’s St Stephen’s Green Shopping Centre from late May until September.

The main logo for the exhibition is an incredible snap taken in 1853 by photographer John Gregory Crace on the estate of the Duke of Devonshire in Co. Waterford.

The photograph shows an unnamed labourer who worked on the estate dressed in tattered clothing with a pipe between his lips.

It was taken just a year after the Famine – which caused Ireland’s population to fall by as much as a quarter – concluded after seven long years.

Historian Gerard McCarthy is organising the exhibition, which runs from May 29 until September 30.

“This year is notable as the 170th anniversary of 1847, which is widely considered to have been the most devastating year of the Famine in Ireland,” Gerard told The Irish Post.

“The Famine is the most significant event in modern Irish history – arguably even more so than the Easter Rising in 1916 – but I noticed that there were no events arranged to commemorate it this year. 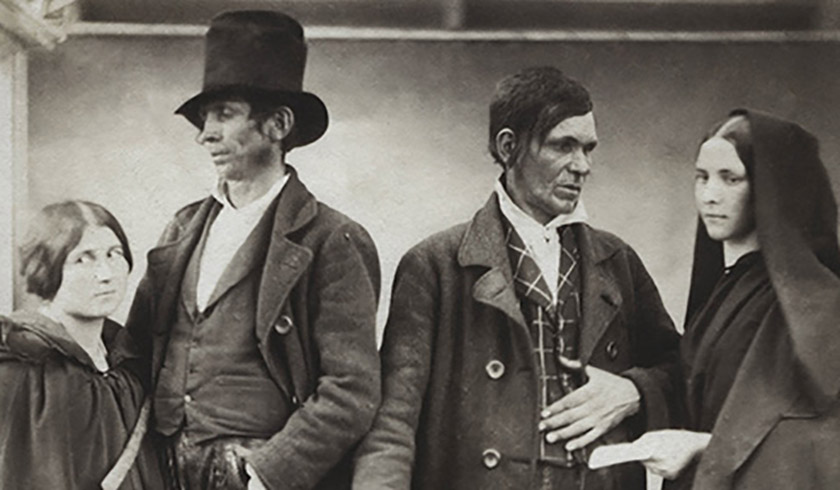 An undated photograph from the famine era in Ireland. Picture: Sean Sexton

“The exhibit features a number of photographs from private collections which have never been seen by the public, featuring survivors of the famine and the aftermath.

“The photo of the labourer on the Duke of Devonshire’s estate is one of the most striking but we don’t know his identity, yet I do believe it’s possible that we can work out who he is.”

Mr McCarthy added: “His clothes are bedraggled and his hair is unkempt but he actually looks quite robust and healthy, which is surprising.”

The picture was taken just 14 years after the birth of commercial photography in 1839.

The exhibit also includes a 15 minute film designed to educate the general public about the effect of the Great Famine on the Irish people.

Mr McCarthy previously produced the film Ireland: The Birth of a Nation on the 1916 Rising, which was shown in schools across Ireland.

“We’ve commemorated 1916 on a huge scale but people are still uneasy about the famine,” he said. “I know some exhibitions are boring but my hope is that this one is accessible as it’s heavy on photos and the real human stories.

“If you don’t know anything about the famine my hope is that you will leave having learned something about Ireland’s darkest days.

The Irish Potato Famine Exhibition will feature on the top floor of St. Stephen’s Green Shopping Center between May 29 and September 30. You can find more information here.