Over 55,000 sign petition calling for Piers Morgan to be removed from Good Morning Britain

A PETITION calling for Piers Morgan to be “removed” from his role as the host of the UK breakfast news programme Good Morning Britain has attracted more than 55,000 signatures.

Morgan has won praise in some quarters for his handling of the ongoing coronavirus pandemic.

The former editor of the Daily Mirror has been one of the most outspoken critics of the UK government’s handling of the crisis.

However, an online petition set up by Liam Austen on Change.org describes Morgan as one of  the "UK's most heinous public figures" and is calling for his removal from the flagship ITV show.

Austen states that by keeping Morgan in his job “ITV are actively choosing to promote an insidious agenda against transgender people (and minorities in general).”

He claims that “through his choice of language” Morgan “regularly berates and mocks those who do not identify in a way he is willing to comprehend.” 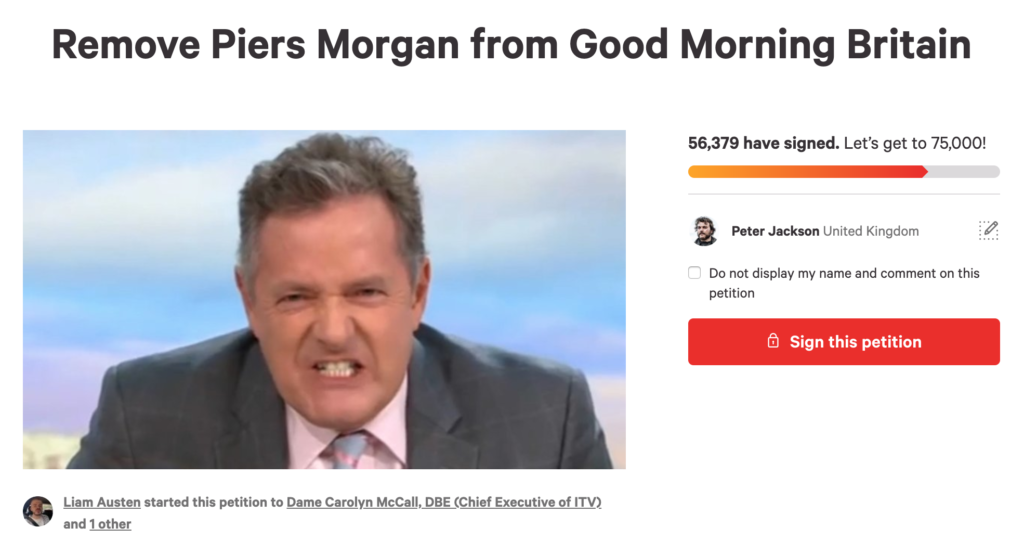 Austen goes on to list several examples of why he believes Morgan is one of the UK’s “most heinous public figures” before berating the GMB host for his handling of guests brought on the show to discuss gender issues.

“Morgan’s disdain for those who dare to identify in a way they feel comfortable manifests in many ways, and as [co-host] Charlotte Hawkins told Morgan “people can be who they want to be”, he plainly replied - “no they can’t”” he writes.

“This is dangerous misinformation. This is the kind of dehumanising dismissal of transgender/non-binary/gender-fluid individuals that perpetuates those suicide rates and keeps them alarmingly high.”

The petition is addressed to Carolyn McCall, Chief Executive of ITV, and editor of Good Morning Britain, Neil Thompson.

At the time of writing, the petition has attracted 56,375 signatures.

Morgan, however, remains as defiant as ever, taking to Twitter to seemingly fire back at those backing the petition and anyone calling for him to ease off his criticism of the UK government.

Memo to trolls: the more you try to silence me with foul-mouthed abuse, death threats & petitions for me to be fired, the louder & harder I will challenge the Govt over its handling of this crisis.
Lives depend on it.

He tweeted: “Memo to trolls: the more you try to silence me with foul-mouthed abuse, death threats & petitions for me to be fired, the louder & harder I will challenge the Govt over its handling of this crisis. Lives depend on it."