The banner was displayed in an area of the stadium containing Crystal Palace fans (Image: Justin Setterfield/Getty Images)

POLICE are investigating after a banner criticising Newcastle United's takeover by Saudi Arabian owners was displayed at their game at Crystal Palace.

The banner took aim at the Premier League's Owners' and Directors' Test, after it approved the £305m deal funded by Saudi Arabia's Public Investment Fund (PIF).

The image depicted a man in Arab-style clothing clenching a bloody sword, as a Premier League representative stands in a pool of blood next to a pile of money. 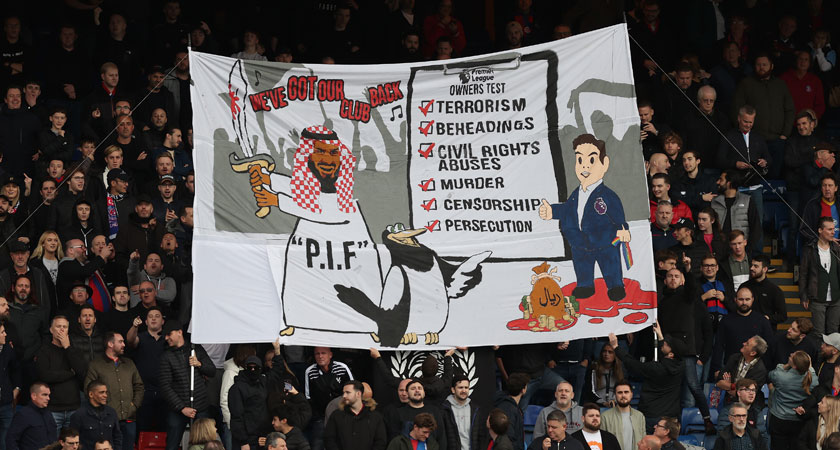 The banner took aim the at the Premier League's approval of the Newcastle United takeover (Image: Julian Finney/Getty Images)

The Palace supporters' group behind the banner said the Premier League had "chosen money over morals and… done business with one of the world's most bloody and repressive regimes".

The Metropolitan Police at Croydon tweeted that they had received a complaint about the banner, adding that "allegations of racist abuse will be taken very seriously".

"Officers are assessing the information and carrying out enquiries.

"Any allegations of racist abuse will be taken very seriously."

The banner, displayed before the game at Selhurst Park in London, included a mock-up of the Premier League's Owners' and Directors' Test, with pseudo categories including 'Terrorism', 'Beheadings' and 'Murder' being ticked off.

The man in Arab-style clothing has PIF written across his chest, while the Premier League representative appears to be chief executive Richard Masters.

Holmesdale Fanatics, the Palace supporters' group behind the banner, released a statement following the display.

"The Saudi led takeover of Newcastle has rightly received widespread condemnation and anger," it read. 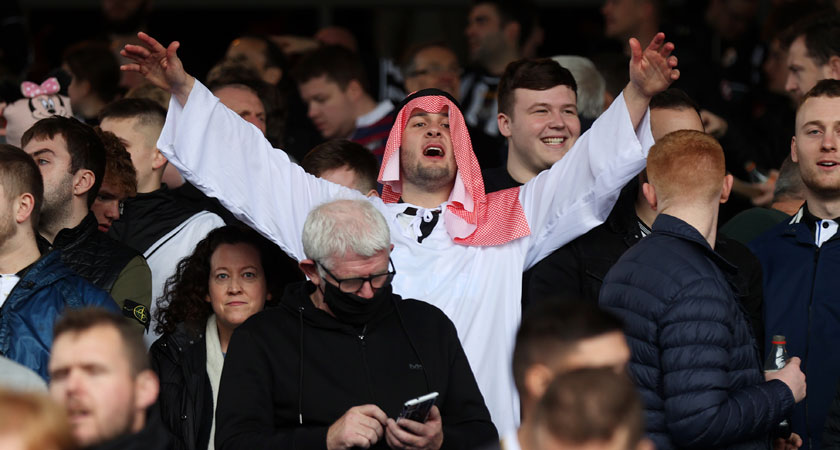 "It is clear the PIF is a front for the tyrannical ruling Saudi regime and by endorsing this, the Premier League has made a mockery of its own Owners' and Directors' test.

"The Premier League has chosen money over morals and in green-lighting this deal, has done business with one of the world's most bloody and repressive regimes.

"A country controlled by fear where women are second-class citizens, same-sex partnerships banned, journalists silenced, imprisoned or killed and 'dissidents' brutally persecuted now has a foothold in our national game.

"To give the 'thumbs up' to this deal at a time when the Premier League is promoting the women's game and inclusive initiatives such as rainbow armbands, shows the total hypocrisy at play and demonstrates the League's soulless agenda where profits trump all.

"Newcastle, as a team, is now being used to sportswash the blood from the hands of a corrupt governance and deluded supporters should consider that reality when singing of 'getting their club back'.

"We are lucky to live in a country where we can display a banner such as this without repercussion.

"Many in Saudi Arabia wish they were afforded those same basic rights."