President Higgins lays wreath at tomb of the unknown warrior

PRESIDENT HIGGINS and his wife Sabina visited Westminster Abbey earlier today as part of the first day of the Presidential Visit in London.

The President and Sabina – who was dressed in a purple fascinator and coat – were greeted at the door of the Abbey by the dean, the Very Reverend Dr John Hall,  who welcomed them with a 'céad míle fáilte'.

The visitors were then introduced to the chapter, the governing body of the abbey and the canons of the abbey.

Members of the Irish party accompanying the president included the Tánaiste Eamonn Gilmore and his wife. 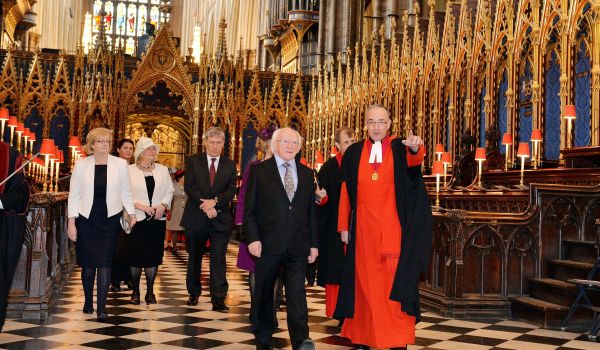 The President was shortly after brought to the tomb of the Unknown Warrior. Prayers were said, among those prayed for were the Queen and President Higgins, for the people of Britain and Ireland.

During the ceremony, a wreath was laid on behalf of the President. The inscription on the wreath, which was laurel and bedecked with ribbons of green white and gold, was written in Irish and translated to: 'laid by President Higgins on the 8th of April 2014.'

The President then made his way through the Abbey to the Lady Chapel, where he met with Hughie O'Donoghue – an artist of Irish descent – who designed the stained glass windows in the chapel. These windows were gifted by Lord Philip Harris.

Afterwards, President Higgins and Sabina made their way to the Poets' corner where they paused to look at plaques commemorating famous writers including Geoffry Chaucer, Dylan Thomas and Ted Hughes. 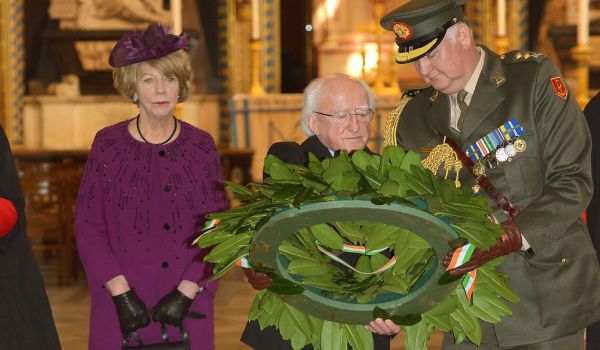 President Higgins with an Irish solider, who lay a wreath at the grave of the Unknown Warrior

Both guests signed the distinguished visitors book before making their way, via the west doors, to the plaque in memory of Earl and Countess Mountbatten.

The President bowed his head and paused for a moment. The plaque is in memory of Earl Louis Mountbatten – the last viceroy of India and relative of both the Queen and Prince Philip.

Mountbatten was killed when a bomb planted by the IRA exploded on his boat in Mullaghmore Co Sligo in August 1979. His funeral was held in Westminster Abbey.

Shortly after, the President and his party then made their made to Westminster Palace.