SINGING and dancing Easter Rising prisoners drove a British jailer to write to his boss and ask to be removed from his post, a century-old letter has revealed.

Reading Gaol prison steward Mathew Loan wrote to his superiors for a transfer, to escape the Irish prisoners who “gave [them] little peace and quiet”.

In the aftermath of the Easter Rising, from April 24 to 29, 1916, 45 Irish prisoners were interred in the women’s wing of the Berkshire town’s prison.

But it seems that at nightfall, the Irish contingent sang and danced the night away, much to the chagrin of Mr Loan. 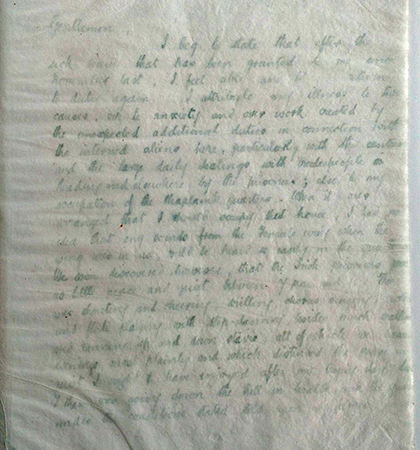 “We soon discovered, however, that the Irish prisoners gave us little peace and quiet between 7 pm and 10,” he wrote in his letter.

“There was shouting and cheering, drilling, chorus singing, violin and flute playing with step-dancing, besides much walking and running up and down stairs, all of which we heard evenings most plainly and which disturbed the peace and quiet I ought to have enjoyed after my trying day’s due.”

He went on to request a transfer, citing his 33 years of loyal service as a reason why he should be granted his wish.

The letter is part of “Universities of Revolution” at Berkshire Record Office, an exhibition that will be open to the public free of charge from April 27 until July 29.

It is so called because of the educational classes undertaken by prisoners at the time.

Many of the Irish interred in Reading had come from other prison camps, including the major one at Frongoch in Wales.

The rebels arranged classes in everything from languages to woodwork to military tactics.

It proved to be invaluable training for the men, who came from backgrounds such as office work and literary careers - and had not experienced military battle before Easter week in Dublin.

But unfortunately for Mr Loan, his transfer request was denied – and it appears he was forced to remain in his post until December 1916 when the prisoners were removed from the gaol.

Universities of Revolution opens on April 27 at the Berkshire Record Office on Coley Avenue in Reading, for further information see their website