US Representative Marjorie Taylor Greene, Republican of Georgia, holds up a "Stop the Steal" mask while speaking with fellow first-term Republican members of Congress on the steps of the US Capitol in Washington, DC, January 4, 2021.. (Photo by SAUL LOEB / AFP) (Photo by SAUL LOEB/AFP via Getty Images)

A US House of Representatives member has come under scrutiny for past social media posts in which she apparently encouraged the execution of Democrats.

Republican Marjorie Taylor Greene, who became a member of congress this year, is a controversial figure in politics due to her outspoken belief in the Q-Anon conspiracy theory, where followers think Donald Trump is leading a war against satanic paedophiles.

The Georgia native is an avid believer of a number of other conspiracies, including 'Pizzagate' and 'false flag' school shootings-- the belief that mass murders have been 'faked' to force legislation on gun control.

Ms Taylor Greene is now facing fresh criticism after a number of old social media posts and videos, now-deleted but seen by CNN, showed her calling for the death or execution of Democrats.

In one since-deleted Facebook Live video, Ms Greene is alleged to have said that House Speaker Nancy Pelosi is "guilty of treason", predicting that she will "suffer death" or "be in prison". 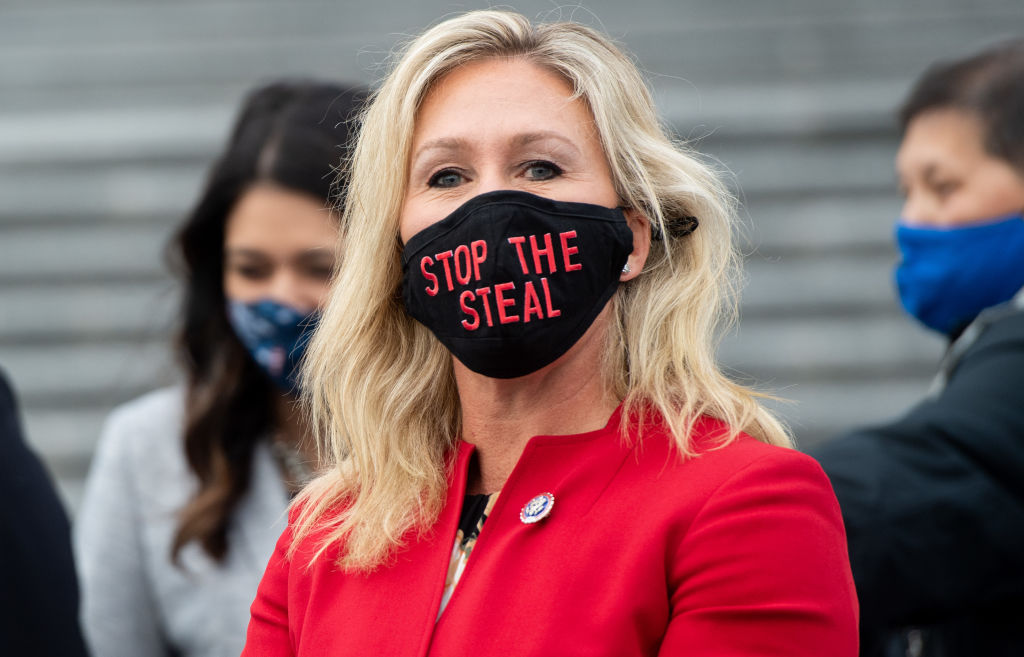 US Representative Marjorie Taylor Greene, Republican of Georgia, holds up a "Stop the Steal" mask while speaking with fellow first-term Republican members of Congress on the steps of the US Capitol in Washington, DC, January 4, 2021. (Photo by SAUL LOEB / AFP) (Photo by SAUL LOEB/AFP via Getty Images)

Another video which resurfaced this week shows her harassing school shooting survivor David Hogg, who has risen to prominence as a gun safety advocate since 17 people were killed at his school, Stoneman Douglas, in 2018.

In the video, taken outside the US Capitol in 2019, Ms Greene calls Mr Hogg a "coward", accusing him of being a paid actor under the orders of George Soros.

She had also stated that other school shootings, including the Sandy Hook shooting, which left 20 children and six adults dead in 2012, was "not real".

Old Facebook posts from 2019 show Ms Greene's account responding to a commenter who asked if they could "hang" Barack Obama and Hillary Clinton, writing "Stage is being set. Players are being put in place. We must be patient. This must be done perfectly or liberal judges would let them off."

Her account had also 'liked' a comment calling for Nancy Pelosi to get "a bullet to the head".

These incidents took place before Ms Greene ran for Congress; she posted a public statement on social media yesterday where she said CNN was planning on writing a "hit piece" on her and that it would be "fake news".

She stated she has had "teams of people" manage her Facebook pages, and some of the posts which have been liked or shared "did not represent my views".

"Especially the ones that CNN is about to spread across the internet.

"They are taking old Facebook posts from random users to try and cancel me and silence my voice."

In both her campaign trail and since being elected, the Congresswoman has echoed claims from former president Donald Trump that the election was rigged.

On the day the US Capitol was attacked by Trump supporters, Ms Greene was one of several Republicans who voiced their opposition to confirming Joe Biden as the winner during the official counting of Electoral College votes.