RANGERS ARE the new Scottish Premiership champions, ending Celtic’s hopes of claiming a record-breaking 10th league title in a row.

The Gers were confirmed as champions following Celtic’s 0-0 draw with Dundee United at Tannadice which, following Rangers 3-0 victory over St Mirren a day earlier, made it mathematically impossible for the Hoops to catch their cross-town rivals.

It marks a momentous achievement for manager Steven Gerrard who guided Rangers to a first title in ten years in his first managerial role and did so in style with his team still unbeaten and crowned champions with six games to spare.

Allied to this, Rangers remain in contention for major honours on the continent, having progressed to the last 16 of the Europa League where they face Slavia Prague.

It’s a remarkable achievement too considering the financial meltdown at the club in 2012 that saw Rangers demoted to the lowest professional tier of Scottish football. 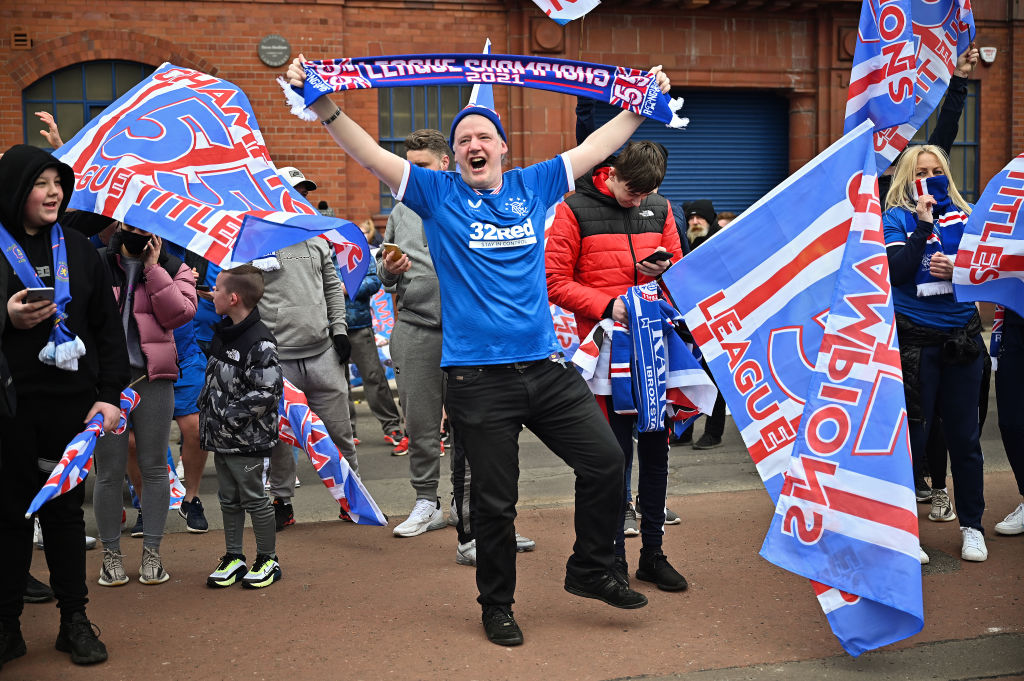 Already three seasons into his tenure at Ibrox, there had been visible signs of improvement on the pitch over the past two seasons despite Rangers falling short in both campaigns.

However, this campaign has proven a different story with Celtic’s abject form under former manager Neil Lennon representing a stark contrast to the free-flowing attacking football seen under Gerrard.

While players like James Tavernier, Alfredo Morelos, Kemar Roofe and Ryan Kent contributed the majority of the goals, it has proven a truly team effort with Premier League veterans like Jermain Defoe also making an important contribution alongside emerging talents like Joe Aribo.

There had already been much anticipation of a potentially decisive day of football in Scotland a day earlier when Rangers fans descended on Ibrox ahead of their match with St Mirren.

Flares and fireworks could be seen as fans broke coronavirus lockdown rules to come out in support for Gerrard’s team in their moment of glory.

Whether the scenes at Ibrox had an impact on the Celtic players going into Sunday’s game with Dundee United in neither here nor there; the Hoops created a glut of chances but found opposition goalkeeper Benjamin Siegrist in superb form.

While Rangers and Celtic will meet for one final Old Firm clash this season at Celtic Park on March 21, it will not prevent the visitors from claiming a 55th league title.

It brings the curtain down on an unprecedented period of domination for Celtic who won a remarkable 12 major domestic trophies in a row and had hopes of claiming a 10th league title.

However, just as Celtic denied Rangers the same achievement in the late 1990s, it was now the Gers turn to play the role of party pooper.

Matters were made worse when a plane flew over Tannadice trailer a banner which read: “Can you see us now? 55 titles”.

A 0-0 draw confirmed Rangers as champions in a turn of events that will stick in the craw of many at Celtic Park ahead of a summer of reflection and potential upheaval at the club.

A new manager is the first major requirement with everyone from Roy Keane to Paul Lambert both linked with the vacant role.

The Celtic board will take time to make the appointment though – after the error of replacing the dynamic Brendan Rodgers with Lennon, back for a second spell, they will be eager to avoid a similar misstep.