Genoa , Italy - 25 June 1990; Paul McGrath of Republic of Ireland in action against Gheorghe Hagi of Romania during the FIFA World Cup 1990 Round of 16 match between Republic of Ireland and Romania at the Stadio Luigi Ferraris in Genoa, Italy. (Photo By Ray McManus/Sportsfile via Getty Images)

PAUL MCGRATH might well be the greatest footballer to ever play for Ireland.

His performance for Jack Charlton’s team in their memorable 1-0 victory over eventual finalists Italy in New York’s Giants Stadium in June 1994 is the stuff of soccer legend.

No longer able to properly train and nursing a pair of dodgy knees, McGrath put in a display for the ages, marking Roberto Baggio, one of the greatest players in the world at the time, out of the game.

McGrath was supreme in the air, perfect in the tackle and with instinctive positioning to match.

When the game ended, few were surprised to see the legendary AC Milan defender Franco Baresi make a beeline for McGrath to swap shirts.

Afterwards, fans and pundits alike agreed: McGrath was the star of the show and the one true bright spot in an otherwise patchy World Cup for the Irish, when compared with the joyous exploits of four years earlier.

And yet it could have all been so different.

Rewind four years earlier and, what many may not realise, is just how close McGrath came to becoming a villain for the Republic and robbing them of their finest moment.

It’s June 1990 and Ireland have defied the odds to reach the knockout phase of Italia ‘90.

They are facing one of the tournament’s dark horses in Romania. A talented collective of players that included four European Cup finalists, the jewel in the crown was undoubtedly Gheorge Hagi.

Dubbed the “Maradona of the Carpathians”, Hagi had a wand of a left foot and was capable of playing anywhere across the midfield. A playmaker of the highest order, his displays at that World Cup would earn him a move to Real Madrid that summer.

But on a memorable afternoon for the Irish, Hagi found his abilities hampered by McGrath who defended doggedly against the rapid Romanian. It was a performance that almost rivalled his one-man show against Baggio – but it nearly ended in disaster.

Speaking on the An Irishman Abroad podcast a few years back, McGrath recalled how one exchange with the famously fiery Hagi almost had him in hot water – and probably should have seen him heading in for an early bath.

“I remember I belted Hagi with an elbow. Simply 'cause he hit me in the ribs,” he recalled.

“I don't know who tackled who but we both ended up on the ground. He hit me a real sly dig in the ribs. Naturally, my left arm came out and I kinda belted him right in the mush.”

The incident shared similarities with the infamous exchange between David Beckham and Diego Simeone, eight years later, at France ‘98 when the England midfielder kicked out at the Argentine after a sneaky dig and was given a straight red card.

On another day, McGrath might have suffered the same fate – but on this occasion he got lucky.

“I looked up at the Brazilian referee and I just went "Please don't. Whatever you do, don't". He luckily enough just waved it off and said 'you both hit each other'.” 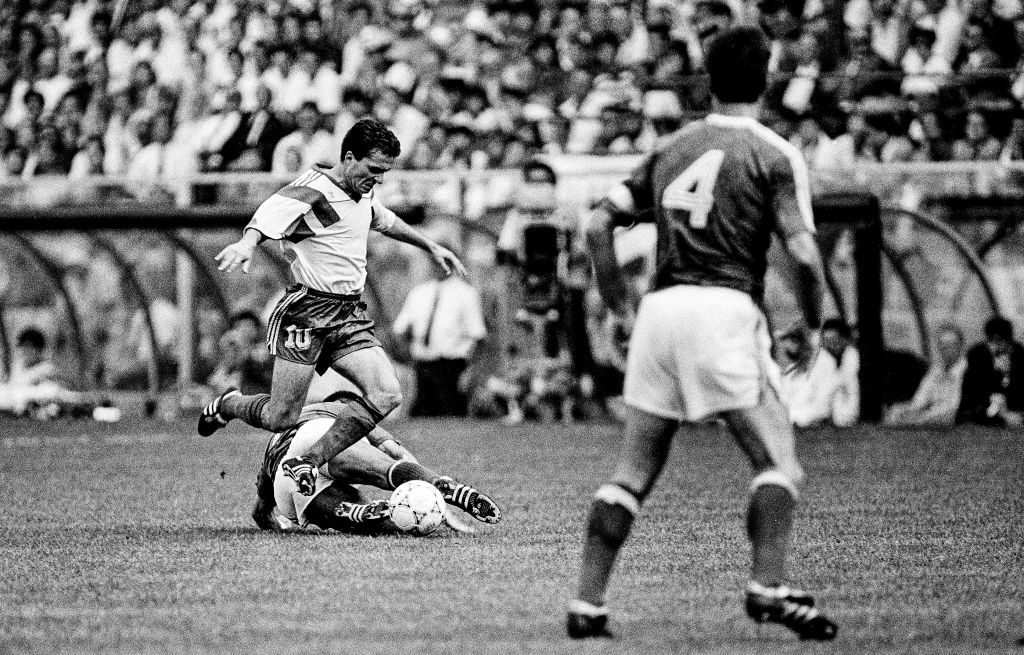 Genoa , Italy - 25 June 1990; Gheorghe Hagi of Romania is tackled by Paul McGrath of Republic of Ireland during the FIFA World Cup 1990 Round of 16 match between Republic of Ireland and Romania at the Stadio Luigi Ferraris in Genoa, Italy. (Photo By Ray McManus/Sportsfile via Getty Images)

Had McGrath been given his marching orders then it’s difficult to know how Ireland would have coped with the dominant Romania attack that day.

The significance of the incident was not lost on McGrath.

“In moments like that you just think, oh my God, everything could have been over for me.”

Fortunately, McGrath and Ireland marched on, defeating Romania on penalties before facing off against hosts Italy in a heartbreaking 1-0 defeat that nevertheless saw Charlton’s team go home heroes.

Like McGrath, Hagi’s finest hour at a World Cup was to come, with the Romanian orchestrating a famous 3-2 victory over Argentina in the last-16 at USA’94.

His displays that summer earned him a move to Barcelona, making him one of only a handful of players to turn out for both Barca and Real.

Still, for 120 minutes McGrath had the beating of him – in every sense of the word.