AFTER almost three decades spent serving the Brent community, Mayo-man Eddie, has closed up shop in Cricklewood, so I went along to help out on his last day of business.

The newsagent is swarmed with customers on Easter Sunday, predominantly regular but some new, who are stopping by to wish Eddie well and to say their goodbyes.

In between taking telephone calls, receiving cards and counting change at the till, he acknowledges every person that enters, many of whom refer to him as a “dear friend.”

Here's what I leaned from helping out for the day:

It’s fair to say that without Eddie’s newsagents, Cricklewood is losing a piece of its Irish identity that was well established in the 1960s when the town – particularly the Broadway – was a culture-rich magnet for Irish emigrants.

Now, as a sign of the other emigrant populations that make the area so diverse, there’s a newly opened  Persian restaurant and shisha cafe opposite, an Afghanistan-owned grocers, a Polish restaurant, and  adjacent to Eddie’s, an Italian pizza cafe and a Chinese take away.

2. Cricklewood has changed, but not overnight…

According to the now-retired 72 year old shop owner, he’s witnessed the face of the area significantly evolve throughout the three decades he’s been there, but he insists that the change hasn’t been sudden.

“It’s happened gradually, so you don’t notice it as much,” he said. “There are more Philippine and Eastern European people in the area but everybody knows that. We’ve got a great relationship with them all anyway.”

3. Customers travelled the distance to shop at Eddie’s…

The newsagent’s exterior may have altered over the decades, but what had remained constant was the much-loved Irish food and products inside.

Aside from Eddie's charm, it’s what’s kept many of his long-time customers returning and for some, even travelling the 10 miles from Hayes and Enfield.

“We appreciate the fact that our customers travel from so far to shop here,” Eddie told me. 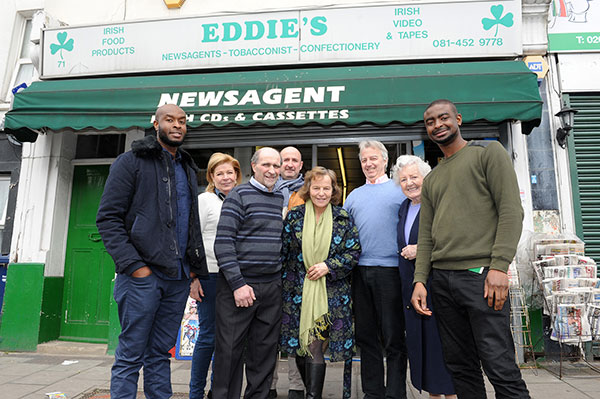 4. Eddie's offered local news and a taste of home…

Ireland’s Eye magazine, and weekly papers from the Kilkenny People to the Limerick Leader, the Roscommon Herald and Sligo Champion, adorned the shelves.

Boland’s chocolate Kimberley  biscuits, Folláin fruit whiskey  marmalade and Barry’s Tea became sparse in the last few days, as customers flocked to the store prior to its closure to purchase the home-sourced goods.

In addition, DVDs lined the walls, of musicians including Charley Pride, Dominic Kirwan and Frank McCaffrey and CDs of Richie Kavanagh and Daniel O’Donnell’s Greatest Hits, as well as an All-Ireland 2010 Football Final video, remained.

Two or three Ireland flags still lay folded in what became an empty cabinet, after many items were donated to the local church and pharmacy.

5. Eddie’s shop has been around for three decades…

Eddie first opened the shop on 71 Cricklewood Lane on October 1, 1986, after originally  emigrating from his hometown of Kilmeena, Westport, Co. Mayo in 1961.

He left behind his family, including his two brothers and a sister, when he arrived on English soil on his own just after St Patrick’s Day. Eddie went on to work in construction, before eventually opening the newsagents.

Long-serving employees, brothers Franklin and Emmanuel Agubuzu, 25 and 23 years old respectively, have worked at the shop for over 10 years.

Emmanuel, who lives off Cricklewood Broadway, and whose family originates from Nigeria, had been doing the paper round for Eddie since he was 12 years old.

The Product Design Engineering student at Middlesex University also worked in the shop in recent years, and it was a family affair with third brother Lambert helping out too.

He met Eddie when he was a youngster at mass at the local St Agnes Catholic Church, and he hails Eddie as the “best manager you could ever have.”

“I’m looking forward to spending time with my family,” he said. “I’ve lived at this address for many years now, but I’m going to move to Hemel Hempstead to be near my two sons.”

With a smile he added: “I’ve got two grandkids. One of them asked me the other day, ‘granddad, now that you’re moving near us will you be able to take me to school?’ “