THE BEAUTY QUEEN'S RETURN: Martin McDonagh’s poignant play is back in London for the first time in decade

SET in the mountains of Connemara, Martin McDonagh’s The Beauty Queen of Leenane tells the tragic tale of a toxic mother-daughter relationship.

Trapped with one another in their isolated home in the rugged west of Ireland, the piece – which is infused with McDonagh’s staple black comedy – is as relevant now as it was when the London Irishman wrote it in 1996, according to Rachel O’Riordan, who is directing a new production of the play.

As Artistic Director of the Lyric Hammersmith Theatre, a position she took up in late 2019, shortly before the Covid-19 pandemic hit Britain, Cork-born O’Riordan is committed to putting on plays which speak to the communities the theatre serves. 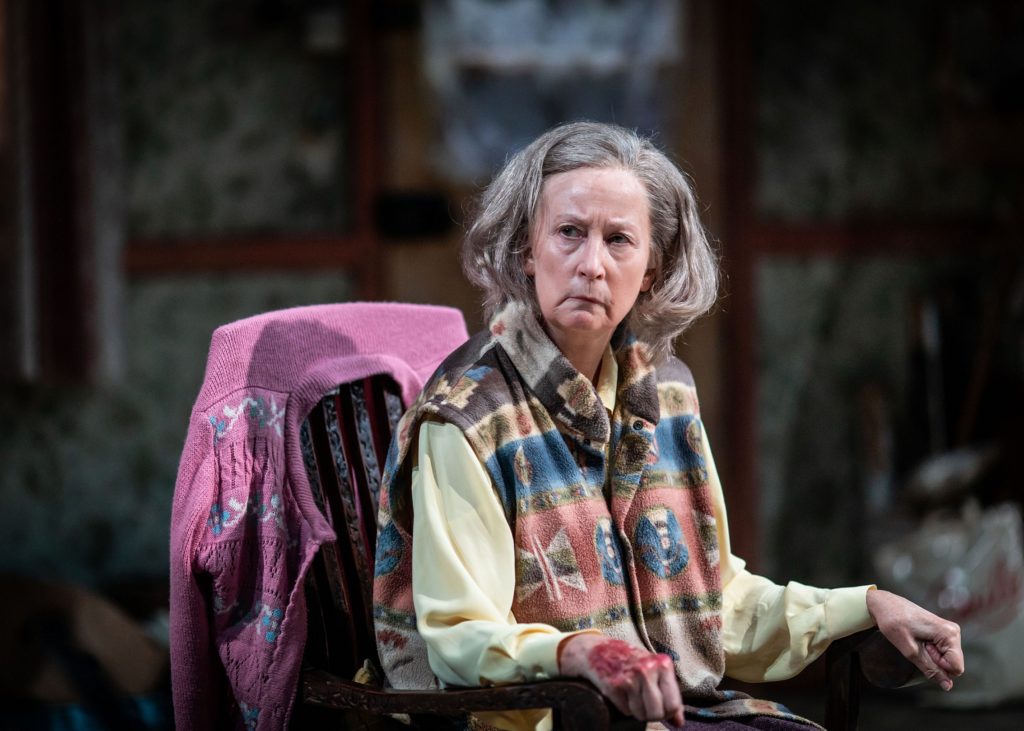 Ingrid Cragie stars as Mag in the west London production

And with Hammersmith - and west London more generally - an area with a large Irish population, her decision to bring McDonagh’s Beauty Queen to the Lyric’s boards was an entirely intentional one.

“It was a very deliberate piece of programming, for many reasons,” Ms O’Riordan told The Irish Post.

“But I also wanted to programme something that reached out to the Irish community in Hammersmith, and in West London more broadly.”

She explains: “I live in Acton, there is a huge Irish community there, as there is in Hammersmith, it’s one of those places that emigrant communities came to over the years. 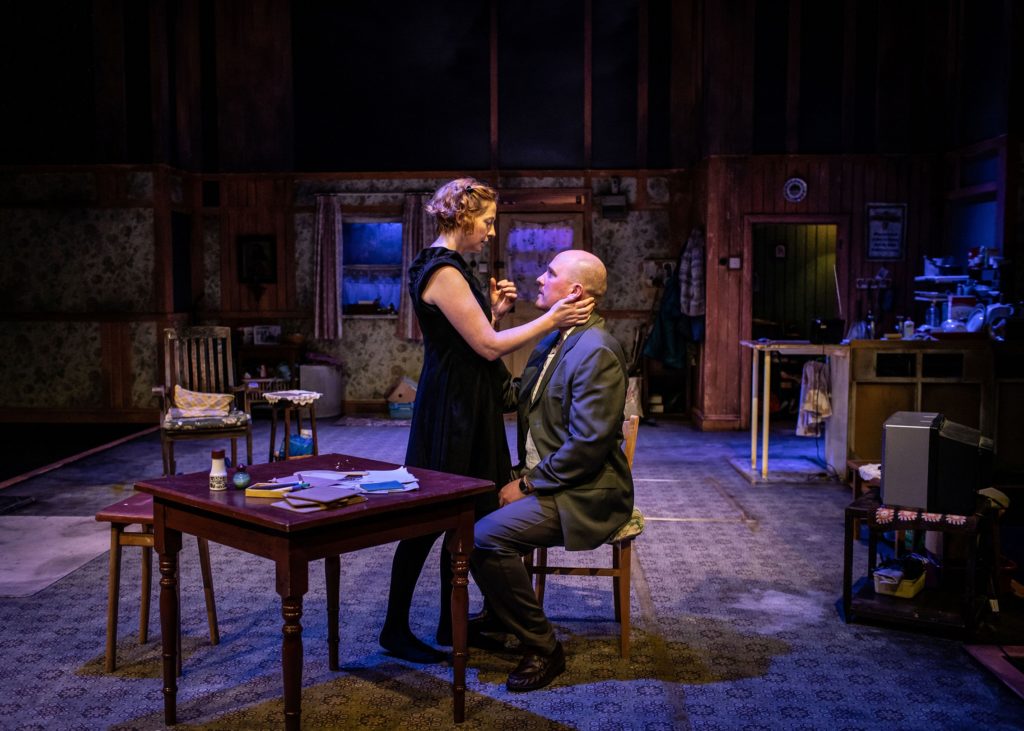 “I wanted to programme something that spoke to those communities, in the same way that I programmed A Dolls House here [in 2019], which was very much about reaching out to the Indian and Asian community in west London and saying ‘yes we are here for you, we are absolutely your local theatre’.

“This has a similar idea behind it.”

Initially O’Riordan had scheduled her Beauty Queen production for 2020, however the Covid-19 pandemic saw that postponed.

It finally opened this month and it features a stellar cast of Irish actors - including the award-winning Ingrid Craigie as Mag, Orla Fitzgerald, of The Young Offenders, as Maureen, Kwaku Fortune, who has starred in Line of Duty and Normal People, as Ray, and Adam Best, who has starred in Peaky Blinders and Silent Witness, as Pato.

“It’s extraordinarily exciting to work on this play, and I am so blessed to have four extraordinary Irish actors from very different Irish backgrounds,” O’Riordan admits.

“Orla Fitzgerald is from Cork, Adam Best is from the North, Ingrid Craigey is Irish theatre royalty from Dublin and Kwaku Fortune is a young Irish actor from Wicklow and very much next generation.

“So, we have a real mix of experiences and backgrounds, and they are brilliant actors, they work so well together, and they are just a delight.” 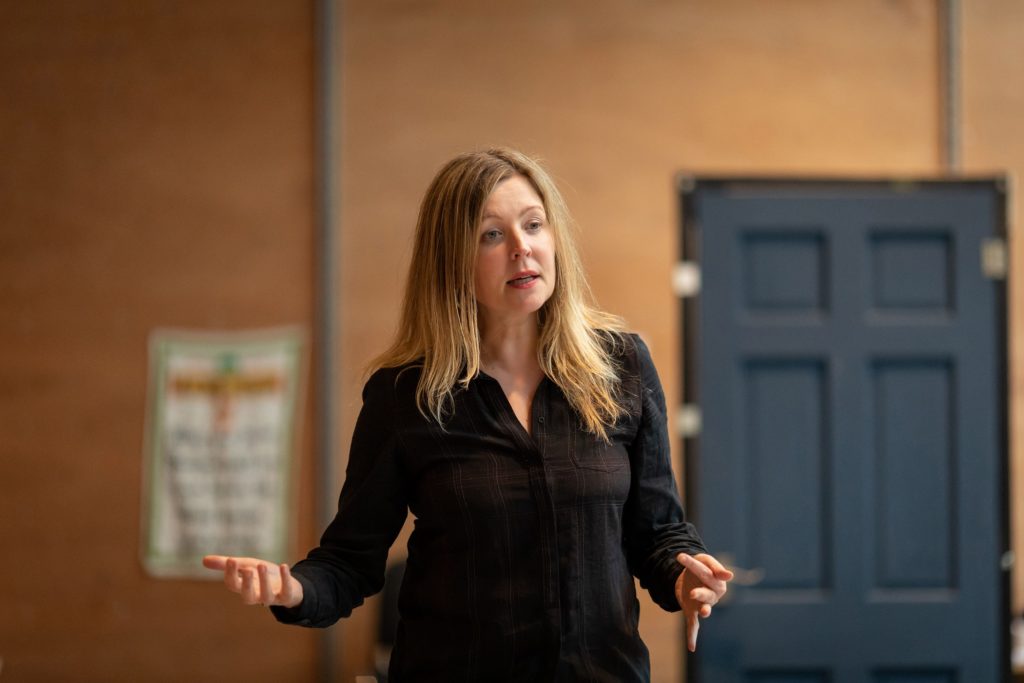 The play itself, however, is very much how McDonagh envisioned it, with O’Riordan admitting there are no surprises in her production, just an unnerving sense that the topics covered may be more relevant now than ever, as we come through a pandemic and the associated lockdowns.

“I haven’t done anything to Beauty Queen, it is still set in Leenane and in the same time, I think it is very important that the play stays in the timescale that McDonagh sets it in,” O’Riordan confirms.

“It was 1995, and I think that is massively important because Ireland in 1995 is incredibly different to Ireland now.

“If you tried to ‘modernise’ the play it wouldn’t work,” she adds, “because since then there has been a vote for bodily autonomy, there has been equal marriage and the Ireland of 1995 is pre-Good Friday agreement.

“The country is unrecognisable now, in many ways, to what it was, and so it needs to be set in the mid-90s for us to understand the character struggles.”

She adds: “But what is fascinating to me is how so many of the struggles remain the same. “The play in set in Connemara, in Leenane, in an area that was extraordinarily hard hit by the Famine, or the artificial hunger, and the depopulation of that area as a result of that atrocity, actually, even today, the area is still underpopulated. 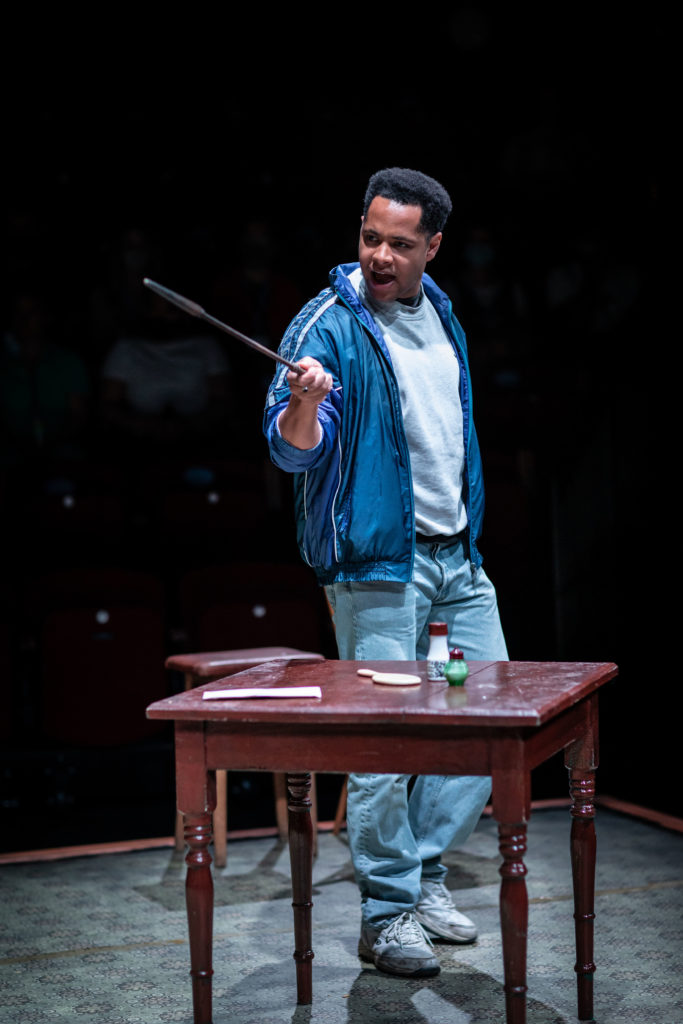 “There is now a huge amount of second home building in the area, but in terms of a living community, the decimation that the Famine meted out in Ireland, the economy hasn’t ever really recovered from that in those areas of Ireland.

“So much loss, so much emigration, so many people gone. You really see that in Beauty Queen.”

That emigration story is key to the play, and one that O’Riordan knows many within her London Irish audience will have experienced first-hand.

“Pato is living in London and coming back and forth to Leenane, he doesn’t feel like he belongs in either place, in Ireland or London, and I think that is a story that many Irish people will relate to, myself included,” O’Riordan says.

“Like, who are we? That again is a consequence of colonisation and the economic devastation of that colonisation.

“As much as the play is about a place in Ireland, it is still very much an emigrants’ story and I think McDonagh really observes this so brilliantly as he himself occupies that space, he is a London Irish person,” the director adds.

There is also an element of the play which might now transcend Irishness entirely, thanks to the impact of the pandemic on all our lives.

The leading characters - Maureen and her aging mother Mag - are found in a strained relationship largely to do with their restriction to their home. 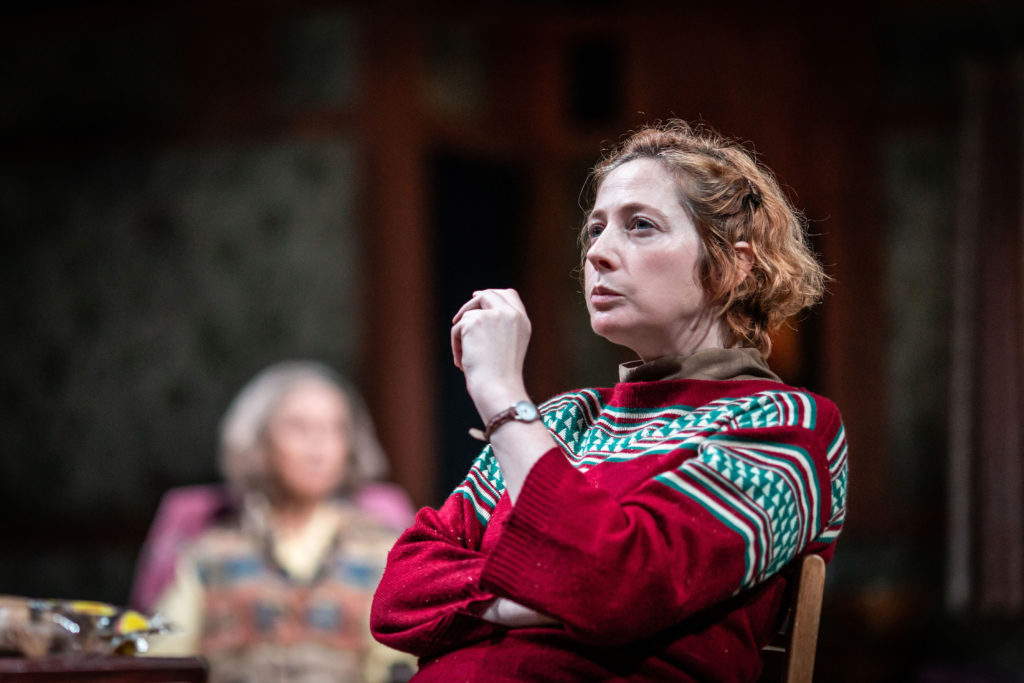 Now, with multiple lockdowns behind us, that is something many people can relate to, whether Irish or not.

“After lockdown, because Maureen and Mag are in this ridiculously awful toxic co-dependent relationship in this house in Connemara together, where they drive each other crazy, many of us will relate after having spent a lot of time with our families of late - where it’s the small things that start to really drive your gears,” she explains.

“That is also in the play, and, weirdly, as a consequence of the pandemic, it kind of feels, more on point now than it may have ever done before.

“How do you live with your family for long period of time with nothing to do?”

While Maureen and Mag are forever destined to remain in their lockdown home, we, thankfully, are now able to leave our homes once again and enjoy such tales in an actual theatre setting.

The entertainment industry was one of the hardest hit by the pandemic.

Its return has been a long time coming, as O’Riordan admits, and is vital for us all, she claims.

“Our industry and the freelance community within it had an appalling time during lockdown,” she says.

“For them and for our audiences we at the Lyric are very glad to be able to offer entertainment and employment and to say to our local community we are still here for you.” 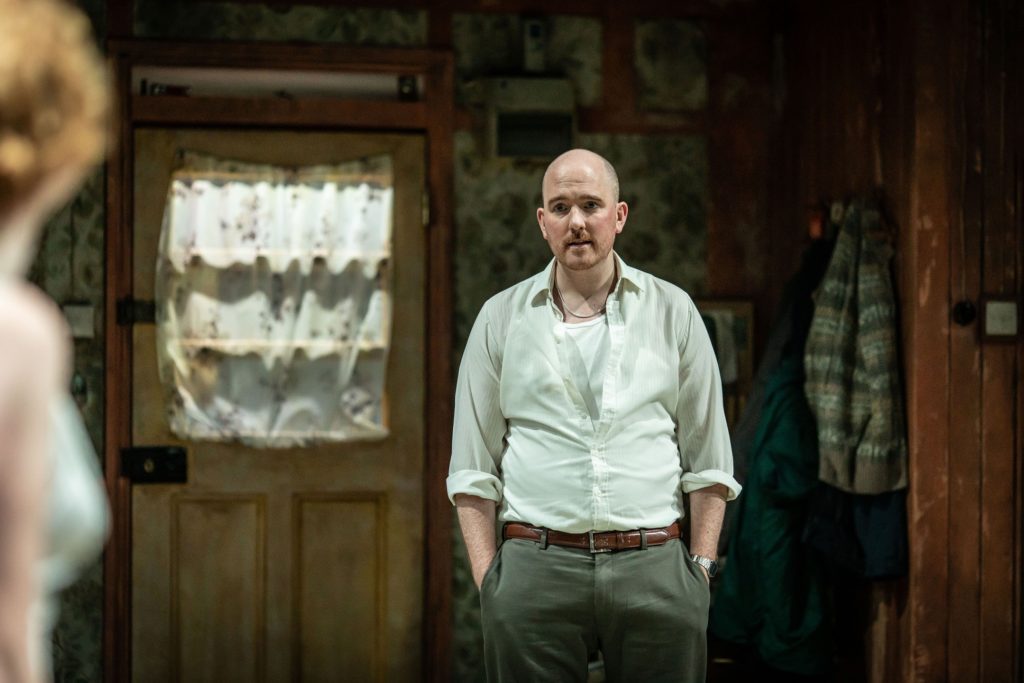 Adam Best as Pato, who is forced to head to England to find work

She adds: “I think it is extremely important, theatre, at a time like this, because it literally, not metaphorically, it literally brings people together.

“You can’t do that on zoom, you just can’t,” the Irishwoman adds.

“There is something about being in a theatre, with other people, let’s face it, with people pretending to be someone else.

“You walk through the door of the Lyric Theatre in Hammersmith, west London, and you sit down in those seats and you are in Leenane, Connemara. Only theatre can do that.

“Only theatre can activate your imagination like that and that is so good for us.

“To step outside of our own lives for a night, to not be us anymore, to not think about our concerns anymore, to imagine you are in someone else’s world, what could be better? “Especially after what we have just had.”

The Beauty Queen of Leenane is at the Lyric Hammersmith Theatre from October 9 to November 6. For tickets click here.