The Jockey's Journal: Concussion in sport is a concern but as a jockey you have to accept the risks

THERE seems to be a greater focus on the long-term effects of concussion in sport in recent weeks.

It’s a dangerous game as a jockey, with the risks of concussion always present, but it’s a risk that you take when you enter the sport.

The first part of a new concussion research project is going to look into screening retired jockeys and former champion jump jockey Richard Dunwoody is going to be one of the first volunteers.

It’ll be interesting to see what develops, as jockeys tend to try and get around concussion, by trying to blag their way through tests and assessments.

On Saturday night, I was trying to find a movie to watch and interestingly came across a film Will Smith released last year called Concussion.

It’s based on the true stories of American Football players in the NFL during the 1970s/80s when players were dying, not on the pitch, but years after.

Some started having blackouts, which caused car accidents and some even died in their sleep. It’s a scary thought.

For jockeys there’s a computer test at the start of the season, which detects whether you’re in good health. You also get asked a series of questions, and it’s tricky to prepare for.

There’s no doubt that when get concussed your long-term memory is never the same. 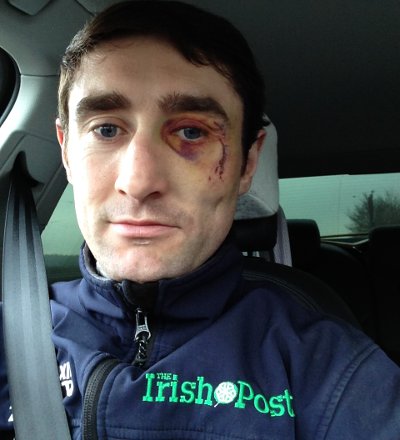 Injury: I've had a few lucky escapes myself

I suppose for jockeys, there’s the option to wear mouth guards but I know a lot of us don’t like riding with it, even if it improves safety.

In boxing it’s definitely worth using. When you fall or have a bad head injury, the lower jaw gets hit and the back teeth hit the top teeth when you fall. So, the gum shield aims to prevent this from happening.

The only way that officials could keep a real eye on injuries though would be to X-ray every sports person in any sport.

It doesn’t seem realistic, given that in racing and boxing, scans would show numerous fractures. It would be so time consuming and there would be too much red tape involved.

One jockey that’s turned his life around following a terrible injury, however, is Brian Toomey.

It’s great to see him doing extremely well and making a comeback to the sport. The pair of us were good friends and often shared driving when we were both up in north Yorkshire. He was based at Phil Kirby’s yard.

Three years ago he hit a really low point in his career when he faced life-threatening injuries after a terrible fall from Solway Dandy.

I previously said to him that if I was a trainer and he was coming back, I don’t know if I’d risk my neck on the line with a jockey who's had a head injury.

I think in ten years' time he’ll be an agent or a trainer, he’s got a good eye for horses. He may not have many rides for David Pipe, but I’m sure he’s learnt a lot in the last year he’s been there.

Also making a return this year is the Hereford racecourse - it's going to be reopened for jump meetings.

It was a tricky track. I wouldn’t say I was ever fond of the place to ride on; it took a bit of riding and a good type of horse to ride there.

But it did have a great atmosphere and whilst I have no idea why it closed in the first place, it’s great to see its return for jockeys in that part of the country.