RYANAIR CEO Michael O’Leary has said that Brexit will spell an end to flights between the UK and EU member nations including Ireland.

Speaking at a press conference in London today, O’Leary said there is a “real prospect” that there will be no air travel between Britain and countries in the bloc in two years’ time.

“There will be no flights between the UK and Europe from March 2019,” he said.

“Theresa May, David Davis and all the other Brexiteers will be trying to explain that to you in 12 months’ time.

“So enjoy your last summer holiday in Europe for our summer 2018 programme because from March 2019 you’ll be heading for Scotland or, god forbid, wet and rainy Ireland.

He added: “There will be no flights over the Irish Sea.”

O’Leary had some harsh words for British Prime Minister Theresa May, who he branded “f***ing delusional” for her Brexit strategy.

“She’s delusional, but the entire British establishment is f***cking delusional.

“Why the f*** are you leaving then? It’s bananas. You’re lions led by f***ing donkeys at the moment, but then you elected them so it’s your own fault.

“When everyone starts panicking about their summer holidays, then we’ll see how strong and stable Theresa May is, she’ll probably be in Japan sipping f***ing tea and sake.”

The Ryanair boss’s rant comes after it was revealed the Irish airline has joined Airlines UK, the industry body representing UK-registered carriers.

Ryanair has joined the group as an “international airline member” which essentially means it is now registered as a non-UK carrier. 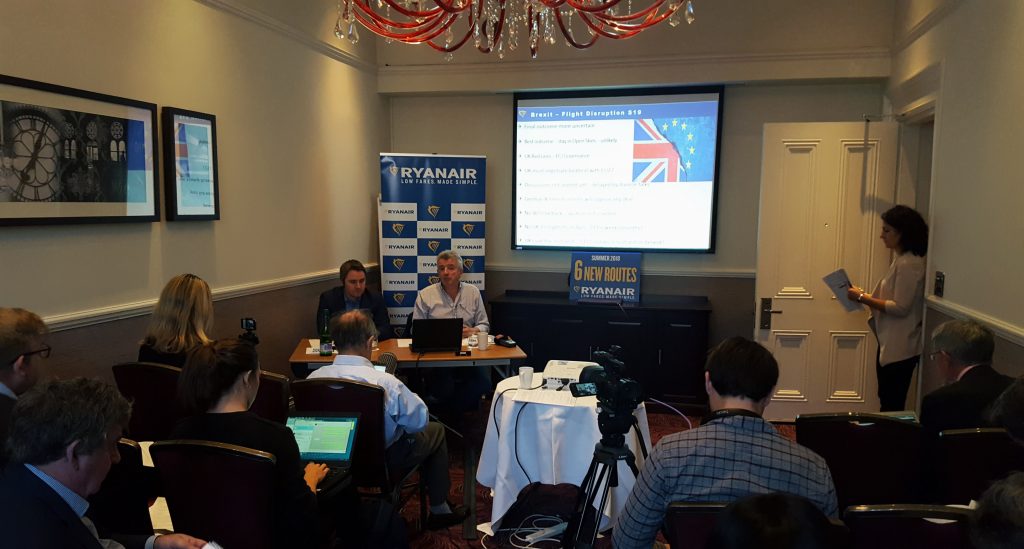 Asked why other Airlines UK carriers hadn’t threatened to stop all flights between the UK and Europe post-Brexit, Mr O’Leary said they agree with him but are “in denial” over the issue.

“We have 60 aircraft based around UK airports, I really think flights could stop from summer 2018 and we will have to rebase our staff in continental Europe which is a real pain.

“Easyjet and British Airways won’t be able to fly to and from Europe because they’re British, and European airlines vice versa. What the British Government don’t understand is that the Europeans actively want to stop flights to the UK.

“How many German tourists visit Britain every year? You could count them all on one hand. The French? They only come over for work.”

Mr O’Leary admitted he was being “hysterical” and that he “doesn’t really believe” that flight disruption will come to pass – as the British Government, in his view, will not pursue a hard Brexit.

He said Theresa May will “roll over” in her divorce talks with the Brussels bloc and come to an interim arrangement which maintains Britain’s EU membership in all but name.

The Cork native added that Britain shouldn’t expect Europe to be “liberal” and used the example of the EU asking Ireland to vote again on 2008’s Lisbon Treaty to support his claim that the bloc will force Britain into a softer Brexit.

In July, it was revealed that Mr O’Leary’s salary rose to €3.26million last year as Ryanair took in record profits and grew their workforce by 1,500.

He said that he “couldn’t give a sh*te” about Theresa May’s recent efforts to curb the pay of some top earning CEOs and added he should be paid more.

“I should be paid more. I might not score as many f***ing goals but I employ way more people.

"If Theresa May was serious about pay then she would take on Premiership footballers. If Ryanair end up on her list I couldn’t give a sh*te.”

He added: “As for shareholders voting against my pay-packet my advice is don’t vote against it – if you don’t like it then sell your shares and f*** off.”